People Power: How Residents of Northern Manhattan are Creating an Energy Revolution

Aurash Khawarzad serves as Policy Advocacy Coordinator for WE ACT for Environmental Justice.

The heat is on: This past July was the hottest month on record; the summer of 2016 was one of the five hottest the world has ever experienced. These trends have led President Obama to declare climate change a “terrifying” threat for humankind.

But, even as leaders take action, they have not done enough to address the issues of social inequality that make climate change a much more dangerous threat for the poor and working class.

Consider this: After Hurricane Sandy, residents of Battery Park City–where the average household income is over $100,000—kept the lights on, thanks to their microturbines, solar panels, and combined heat and power systems. But those across Lower Manhattan in Chinatown and the Lower East Side—predominantly Asian-American and Latino neighborhoods where the average income is less than $30,000—lost power for weeks.[1] For people in those neighborhoods, climate disasters make the daily struggle to find work, transportation and quality healthcare even more challenging. 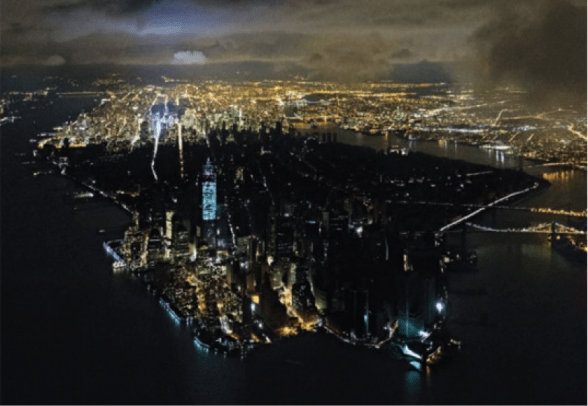 The disproportionate impact on low-income communities of color means that climate change is as much a political and economic challenge as it is an environmental one. That is why the people of Northern Manhattan–an area with a long history of environmental injustice–launched the Northern Manhattan Climate Action Plan (NMCA) in 2015.

Created in partnership with WE ACT for Environmental Justice, a local non-profit organization that works to empower residents to improve their environmental conditions, the NMCA began with an intensive a community-based planning process. That process produced a plan to help prevent climate change while building resilience to its impacts and addressing systemic inequality. The NMCA seeks to reduce energy costs and pollution from fossil fuels; protect communities from blackouts; and create economic opportunities for the underemployed.

At the core of the NMCA is the concept of “energy democracy,” which puts hard-hit communities at the center of the transition to renewable energy. Energy democracy encourages the development of locally-owned renewable power, which can reverse decades of underinvestment in low-income communities by helping retain energy-related investments and expenditures.

As WE ACT member Shaun Williams recently observed at a retreat of the New York State Energy Democracy Alliance, “energy is an intersectional issue that has an impact on the local economy and environment. The more that residents can be included in the process of planning and developing energy infrastructure, the more capital we can keep in the community and the faster we can implement environmental improvements.”

Energy democracy also enables residents to manage their own infrastructure and shape local environmental conditions. It invites residents to participate in making decisions that are best for their community—including identifying at-risk buildings and populations, and tapping into local talent and skills.

One of the NMCA’s key energy democracy initiatives is the construction of solar energy throughout Northern Manhattan. The potential is huge: In New York City, two thirds of buildings have roof space suitable for solar panels. According to one study, those panels could supply nearly half of current daytime peak demand, and 14% of the city’s total annual electricity use. Moreover, New York is one of the few states with a shared solar law, which allows renters and others living in apartments without roof access to generate their electricity from off-site solar installations.

The NMCA puts a priority on helping renters and public housing residents get access to solar power. To that end, community members are engaging in participatory research and developing their own enterprises to usher a new era of clean infrastructure for NYC. This includes pooling their resources—such as rooftop space and funding–to build solar installations for at-risk populations.

By coming together to discuss their energy needs, residents of Northern Manhattan have developed a rich understanding of where energy democracy is needed most and how it can help transform neighborhoods. As a result, WE ACT is working with tenants to identify areas that are likely to flood and lose power during extreme weather, and initiating solar projects in those areas to lower costs and reduce dependence on the main energy grid.

WE ACT has conducted spatial analysis to help determine where investments can reap maximum environmental and social benefit. The images below show the vulnerable areas of Northern Manhattan. Areas such as East Harlem, West Harlem Waterfront, and parts of Inwood are exposed to sea-level rise, have a higher urban heat island (UHI) effect, and include higher numbers of people with low incomes who are dependent on public assistance. 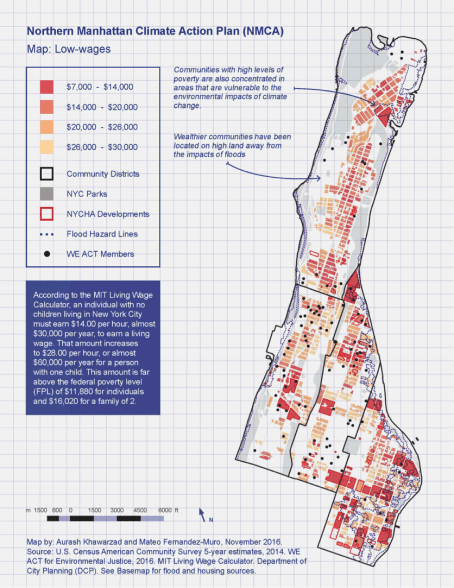 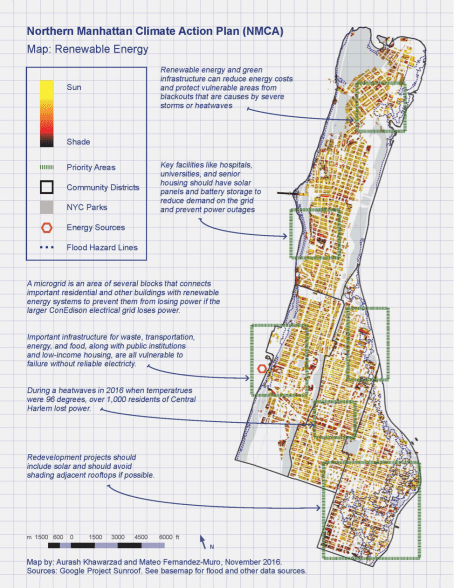 And WE ACT is also working to expand access to job opportunities in the growing solar market. In 2005, there were only five solar installers operating in New York; last year there were 55, employing 2,700 workers. Those job opportunities could be made available for local residents if they had the skills and knowledge of the industry. By forming partnerships with organizations in NYC that provide education on solar engineering and installation, such as Solar One, WE ACT is building the capacity of residents to implement their vision of community resilience.

“Since the sun is free, it means we can cut out the middle-man and retake control of our energy system,” said Tina Johnson, a WE ACT member. “By making our energy system more democratic we can begin to deal with all the pollution we have had to experience over the years, and young people will have a career opportunity in a growing field that can make New York’s future brighter for everyone.”

Thanks to the work of WE ACT members and other community advocates, the first community-led solar installations in Northern Manhattan are being developed. It’s a first but important step towards power that is truly for the people. It also shows that communities can transform their energy systems, and take the lead in fighting climate change.

This post was produced in collaboration with the Island Press Urban Resilience Project, with support from The Kresge Foundation and The JPB Foundation.