A New Model for Public-Private-Philanthropic Engagement

Mark Skinner is Vice President of SSTI and Director of the Regional Innovation Acceleration Network (RIAN).

Economic. That’s the critical word in this question that leads to disagreement on priorities for investment and action. It’s traditionally outside the domain or on the fringes of our efforts to promote a community’s wellbeing.  Housing. Safety. Food/Nutrition. Early Childhood Programs. Training. Health. Environment. In most places, we’ve approached each of these in manners devoid of the business and economic acumen of our cities.

Fortunately that’s changing.  Living Cities and Meeting of the Minds are testament to this.

At the same time, our economic development efforts have been mostly dominated by real estate, growth and financial interests focused foremost on wealth development. Our technology-based economic development initiatives keep their eyes on research at the front end and wealth generation on the back. Economic development, then, is most often about wealth for the developers, the financial institutions, the business owners, investors and shareholders and, of course, the tax collector.  Smaller efforts may be made toward inclusion and inequities, but these are most often tangential to the core mission.

We have too many statistics to show the current model doesn’t work. If the verticals were designed properly, they would be working themselves out of business. Instead, both the funding sources and the funded organizations are too heavily invested in the structures or ideology that created them.  Both sides have apparently forgotten it’s not about them.

Every city has dozens of well-meaning organizations, agencies, institutions, groups and individuals working to create positive change across the four verticals.  But as funding tightens and the evidence shows more needs to be done, these structures often try to change what they do without changing what they are – or asking if they should even continue to exist given the scope of the transformational change needed. Our boundaries, bureaucracies, invested interests, and organizational inertia are slowing the emergence of the new path.

As the new model emerges, answers to the opening question are being found by individuals often working around the organizations and policies intended to help them.  There is an urgency or impatience that has many traditional programs becoming less and less relevant, despite continued public or philanthropic investment.

To broaden economic opportunity for a city’s residents, we need to reestablish each individual’s sense of belonging and their ability to believe in possibility. These need to happen simultaneously on several scales – the city block, the neighborhood, the community, the region, the world. 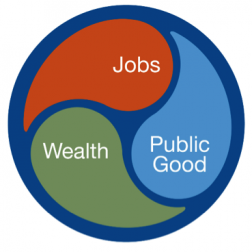 Where this appears to be happening already is around shared, specific problem solving.  While traditional economic development has focused on wealth and job creation, the emerging model sees us shifting priorities toward addressing greater public good. As long-term, sustained public good is addressed, prosperity will follow (see the yin-yang-yum diagram at right).

The language and structures of this shift – impact investing, B corps, corporate social responsibility, social entrepreneurship – is already emerging, but is also easily coopted by the goals and structures of players in the four old verticals.

A component of the new model is the emergence of loose affiliations temporarily organized around specific challenges that participants want to address. These efforts can arise from meet-ups leading to new maker places or civic tech accelerators; neighborhood crime block watches spawning parks/playgrounds/community gardens or neighborhood-supported business development.

Traditional organizational hierarchy and positions/titles are often ignored – or tapped only when beneficial to solving the challenge. In many places, technology is allowing us to open up the ability to participate. In others, the lack of technology, or funding, is spurring innovation.

The organic nature of the collective problem solving in the emerging model helps break down the old verticals by focusing initial efforts on outcomes. The old model starts with the institution or organization asking: what tools do we have ready to employ? The old model also asks: what are the impacts of these changes on our organization or existing power/wealth? The new model dismisses these questions outright. It isn’t about us.

During the disruption of the transition period, embracing change means some difficult decisions are made. It also means less top-down and formally directed programs, which seems antithetical to how government, philanthropic, corporate or institutional funding works. Funders need to learn to trust the chaos in the system as the new mindset unfolds based on more adaptive, more dynamic, more complex integration of uncontrolled parts (each solving its own problems).

If we’re starting from a vision of what we want in the long term, rather than what is possible given our current menu of programs and tools; focused on solving the problem; open to including everyone and anyone sharing the vision but not wedded too tightly to a single approach; and helping everyone involved to remember it isn’t about us (or organizations or positions), then we’ll be moving in the right direction to answer that challenge of creating economic opportunity for all.