Saar Golde is the Chief Data Scientist at Via, a leading provider of public mobility solutions. Before joining Via Saar built and led the data science practice at Knowledgent (now part of Accenture). Prior to that, he worked for Revolution Analytics (now part of Microsoft) as their first analytics solution architect, and was the chief economist of the virtual world of Gaia Online. He holds a Ph.D. in Economics from Stanford University, an M.Sc. in Management Science from Tel Aviv University, and a B.Sc. in Physics and Math from the Hebrew University in Jerusalem.

Andrei Greenawalt is the Head of Public Policy at Via, a leading provider of public mobility solutions. Andrei previously worked on regulatory and policy issues at the White House (2009-14), including as Policy Advisor in the Office of the Chief of Staff and as Associate Administrator of the Office of Information and Regulatory Affairs. He has also served as a law clerk to two Federal judges and worked for the U.S. House of Representatives Committee on Government Reform. He is a graduate of Princeton University and Yale Law School.

The COVID-19 pandemic and the Black Lives Matter movement have brought much-needed attention to inequitable structures in our society, including how our transportation systems and cities have been designed. At Via, we’re committed to doing our part to increase access to jobs, educational opportunities, grocery stores, health care, and other critical services. That’s why we’re working closely with cities to improve and expand public transit, especially for underserved communities. 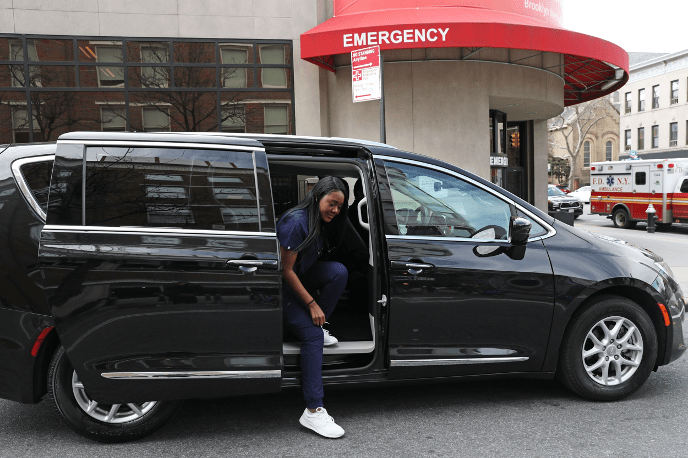 There’s no question that low-income individuals rely more heavily on public transportation than those who are wealthier. According to the American Public Transportation Association (APTA), nearly 70% of all Americans who depend on the bus make less than $50K per year. Many transit agencies and cities across the country have turned to on-demand microtransit over the last couple of years to improve public transportation options for low-income residents. Those who have lower incomes often can’t afford to own a car, and have been systemically underserved by traditional transit networks.

When COVID-19 hit, those in higher income brackets started working from home and using their personal vehicles for necessary travel, while millions of lower-income Americans, including a disproportionate number of people of color, don’t have that luxury and have struggled to make ends meet.

“…dynamic, on-demand public transit has proven to be a mobility lifeline for those in low-income areas during this crisis.”

In the midst of COVID-19 shutdowns, on-demand transit has begun serving specific community needs, such as food delivery to vulnerable populations, and transporting hospital workers in the overnight hours. Further, data shows that dynamic, on-demand public transit has proven to be a mobility lifeline for those in low-income areas during this crisis. How’d we find this? We started by choosing three of our partner cities that have launched on-demand public transit solutions: Arlington, one of our longest-running services; Jersey City, one of our newest; and Los Angeles, where we recently celebrated our one-year anniversary. Then, we analyzed how COVID-19’s impact on rider demand related to income levels throughout each city.

WATCH: How to successfully launch and grow an on-demand service.

Let’s start with Jersey City, where our recently-launched on-demand microtransit service fills critical gaps in the existing public transit system. New services are providing a much-needed mobility option to and from a centralized zone, including the Downtown area, as well as within the north and southwest sections of the city. 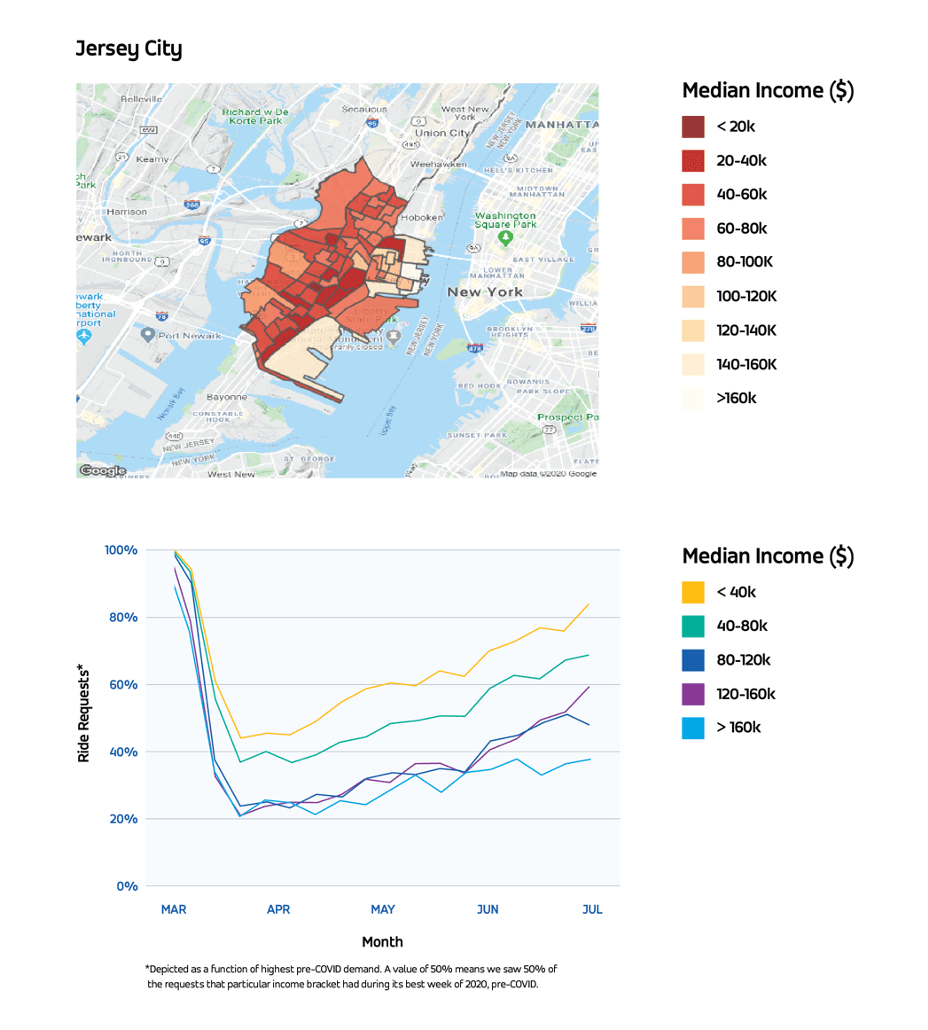 The line graph shows ridership demand peaking around early March, and hitting a low later that month, mirroring trends throughout the transit industry. And yet, the rate of this decrease (i.e., the steepness of the line) in demand in areas with average income under $40K a year, is less extreme than that of the $40K-$80K bracket and, even more markedly, than that of the brackets above $80K. It’s also clear that the <$40K group and the $40K-$80K group have experienced a steady recovery, turning back to microtransit, since early April.

Translation: riders in lower-income areas were not nearly as quick to move away from microtransit during COVID-19, and, looking at data from early April onwards, they have come back to the on-demand service at a stable rate.

Via in Arlington, Texas

Next up, we have Arlington, Texas. In Arlington, we entirely replaced a single-route bus service with shared, dynamically-routed, on-demand rides servicing much of the city. 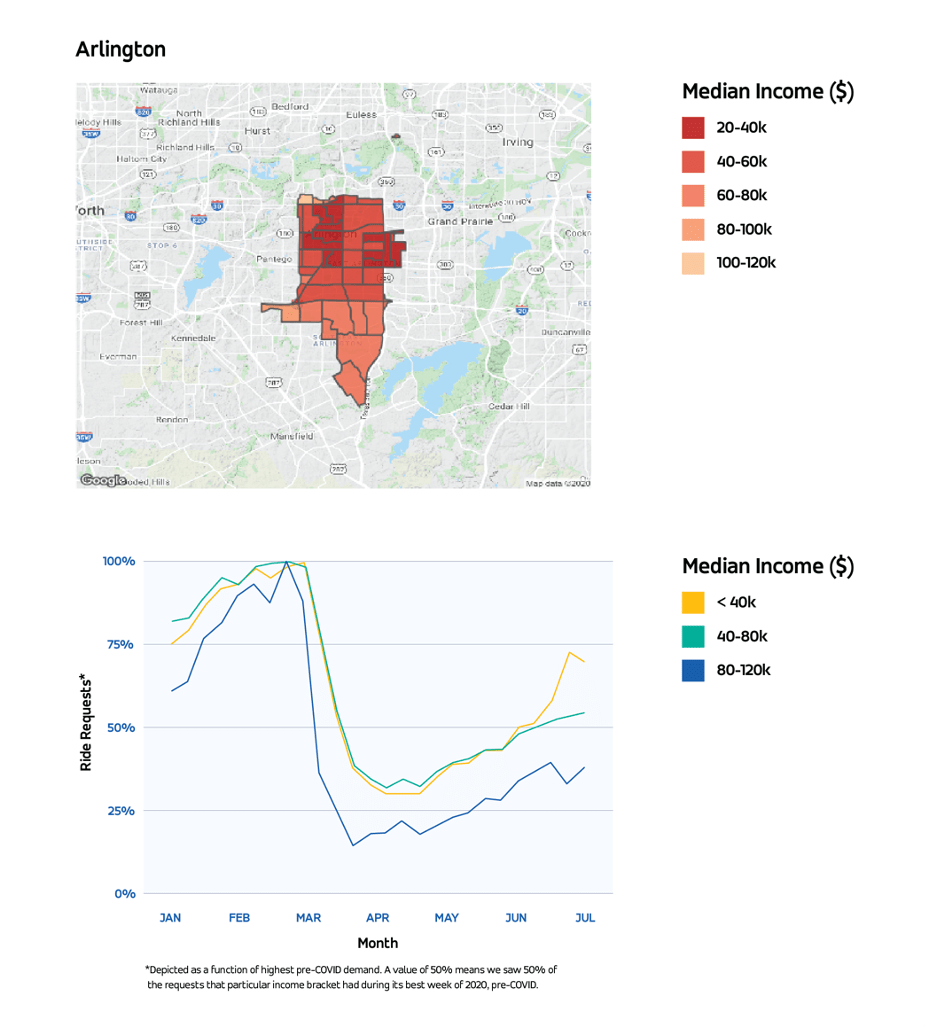 Our line graph shows a consistently higher relative demand among the <$40K and $40K-$80K brackets, compared to the $80K-$120K bracket. We also see the same trend of lower-income areas experiencing a far slower rate of decline during the pandemic than higher-income areas. All of this to say: another point on the equitable mobility scoreboard for on-demand transit.

Arlington will be a particularly fascinating case to keep a close eye on in the coming months, given that this on-demand service comprises the city’s entire public transit system.

Via in Los Angeles, California

Finally, let’s take a look at Los Angeles and our on-demand shared transit service implemented in partnership with the Los Angeles County Metropolitan Transit Authority (LA Metro) to provide first- and last-mile service to and from Metro stations in North Hollywood, El Monte, and Compton. 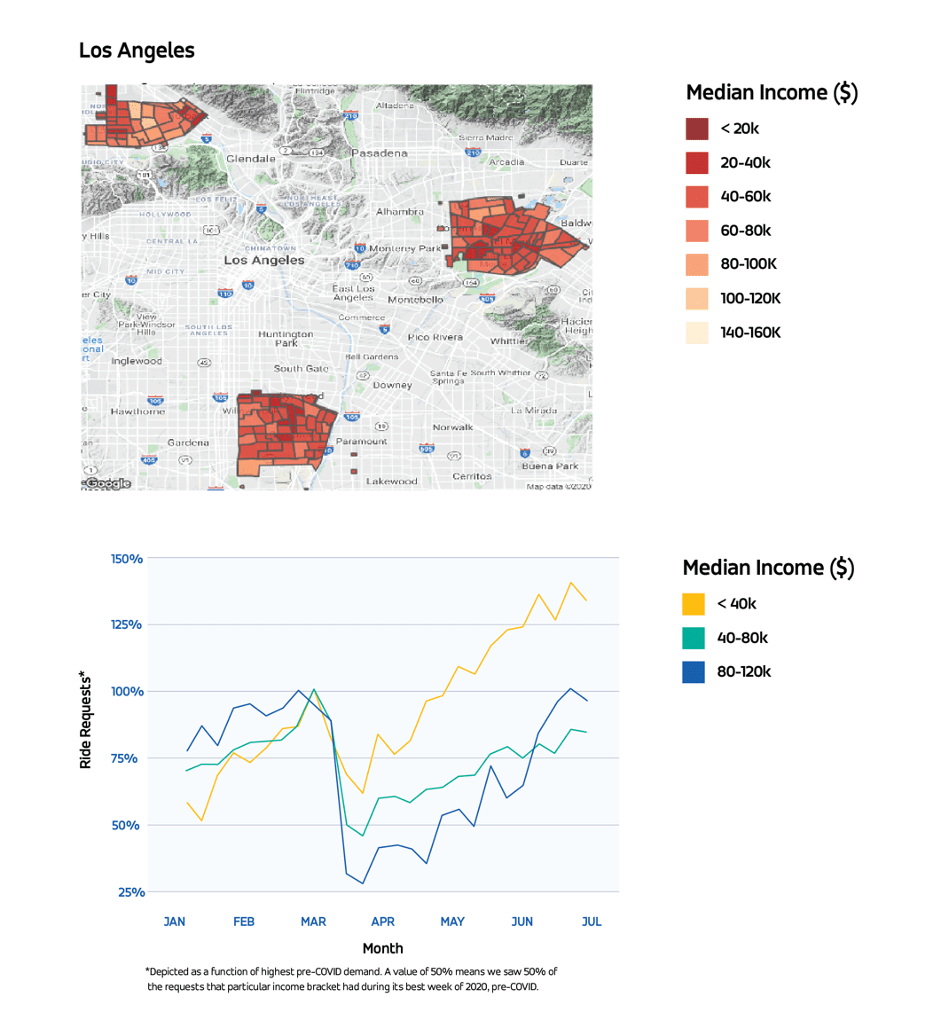 As expected, all income levels saw steep drops in demand immediately after COVID-19 hit. The rebounds we’ve seen for the $40K-$80K, and $80K and up brackets have been impressive, with both rising to about 75% of their pre-COVID peak by late May, and the latter group matching its highest demand of 2020 the following month. But, take a look at the <$40K group. Wildly surpassing all expectations, this segment achieved its highest ridership for all of 2020 in June; around 140% of its pre-COVID peak, and demand is continuing to grow.

You might also notice that, in addition to that remarkable recovery, demand for the <$40K group in L.A. only dropped a marginal amount after COVID-19 hit. We believe this is largely due to key changes made to the service by LA Metro and Via, including

So, what does this all mean? That the service is functioning exactly as L.A. intended. LA Metro’s on-demand network is acting as a lifeline for riders who still need reliable transit during this time, especially for lower-income residents.

Riding into the future, with everyone onboard.

The data we’ve gathered from these three U.S. partner cities suggests that microtransit has been a vital public resource for lower-income communities during the coronavirus pandemic. Looking ahead, the long term socioeconomic reverberations of COVID-19 mean that affordable, convenient public transportation will remain absolutely critical.

Now is the time for cities to meet a twenty-first century challenge with a twenty-first century solution. By joining the microtransit movement and integrating on-demand options into existing public transit infrastructure, municipalities across the country can better serve their communities and foster economic mobility for all.