What Do We Need to Build Sustainable Cities?

Hannah Greinetz holds a BA in Anthropology from UC Santa Cruz and an MBA in Sustainable Management from Presidio Graduate School.

Every so often, I find it important to reset and to re-envision what a successful future looks like. This article seeks to take a step back and revisit the fundamentals of what the building of a sustainable city requires. The footprint of cities is a heavy contributor to the un-sustainability of life on the planet; each city takes much more than its total land area to support the population that lives, works, and plays there.

It’s a mind boggling fact that over half of the world’s population lives in urban areas, and this number will increase to about two thirds of the world’s population by 2050. That means that today, 3.9 billion people are living in cities, and that number will continue to rise exponentially. Tokyo, Japan is today’s most populous city, with 38 million dwellers; followed by Delhi, India with a population of 25 million people and expected to grow to 36 million by 2030. In the U.S., 81% of our population of 320 million live in urban areas or suburbs as of this year. 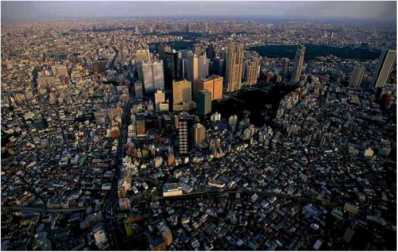 For most people, the impetus to work for a more sustainable city stems from the desire to live in a more beautiful and live-able city for themselves and their children, or from the worry that the next natural disaster will wipe current infrastructure and systems . The ideal city would be cleaner, quieter, safer, more accessible, and healthier. Cleaner cities would have less trash and less pollution than current systems allow for. Quieter cities would have less noise from cars and a more organized sense of the urban chaos that city dwellers love. Safer cities would be well lit, well patrolled, and have a strong sense of community. Well accessible and sustainable cities would make public transportation the cheapest and easiest option for travel, negating the need for cars and the congestion and pollution they bring. Bike access and priority is also a cornerstone of the ideal sustainable city. Finally, the ideal city makes health and sanitation systems a priority, and would do so by making health care easily accessible, as well as fresh food, access to recreation, and top-notch sewer and waste services.

The View From Main Street

Although many of us may have a vision for the city that we want to live in, I think it’s safe to say that few of us feel as empowered as we’d like to in the process of change-making. This stems from a root system of problems, not from one single source that we would be able to identify and target with a panacea. Although many city residents may think that our cities are moving slowly into the future, and are lagging behind the private sector in terms of innovation and embracing technology, it’s important to keep in mind the challenges and barriers that cities must take into account when planning for change. When cities implement new programs, they’re putting taxpayer money at stake, and thus are less incentivized to take risks that may lead to innovation or breakthrough in old systems. City governments have a wide array of stakeholders to consider, and many stakeholder groups have different needs and wants from city services.

Even so, considering the hurdles, there are a distinct set of barriers to implementing sustainable practices, systems, and economies, that most cities are facing.

Where’s the Fast Lane to Change?

As impassioned citizens, we tend to argue the case for the one project or the plan that addresses what we see that we need to build a sustainable city, but the reality is that we need to push from many different angles at once. The most basic premise for change starts at the roots of a city, with its people’s will for change, and in conversation. The level on top of this grassroots communication, requires that citizens have access to the channels that feed their information to city officials who can continue the conversation at the city and policy level. The disconnect happens between these two tiers, creating blind spots in both policy making and citizen conversations, and rendering outreach efforts by city governments fruitless, for lack of clear channels of engagement between the two groups.

A handful of new apps are popping up to fill this gap in communication, and will hopefully encourage civic engagement in this digital age. The worry is that all city dwellers are not on the same wave of technology, and so whole demographic groups and even neighborhoods are left out of these technology-based conversations. However, here, is a useful list of apps that are addressing urban communications between citizens and government. 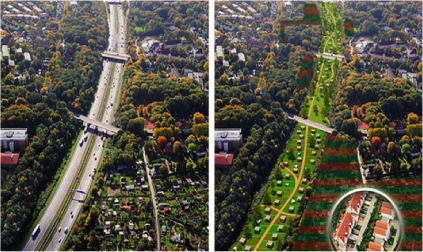 Assuming that we’re on track (and we are) for creating positive and inclusive sustainable change in our cities, and recognizing that dialogue between city governments and city dwellers is a key factor in the equation; what are the overarching stretch goals that these conversations should be considering?

To keep it purely scientific, with the goal of decarbonizing city economies and cities by 2050 (which is what we need to do globally to avoid major consequences of climate change), Scientific American posits that we need to do the following:

These necessary changes don’t sound easy, and there’s clearly no single answer to the question of what we need to build sustainable cities (and soon). What is clear, however, is that cities are reliant upon their most plentiful resource: their citizens, to be key drivers and engaged ambassadors of the change process. Systems-change is necessarily iterative and collaborative, and human systems are no exception; we’re all in this together.

“You never change things by fighting the existing reality. To change something, build a new model that makes the existing model obsolete.” ~ R. Buckminster Fuller

What is Meeting of the Minds?

Meeting of the Minds is a non-profit organization that brings together urban sustainability and technology leaders to share knowledge and build lasting alliances. We foster person-to-person and city-to-city learning by spotlighting projects and practitioners working on urban solutions. We connect people and ideas through digital and in-person events and resources.
Attend our free monthly webinars and join us November 27-29, 2018 in Sacramento, CA for the Meeting of the Minds Annual Summit.