Mind the Gap – Cities and the Spaces Between

Dr. Harrison is an IBM Distinguished Engineer Emeritus and was most recently the inventor of IBM’s Smarter Cities technical programme. He was previously Director of Strategic Innovation in IBM Europe and Director of Global Services Research. He is an IBM Master Inventor and a Member of the IBM Academy of Technology. He retired in January 2013 from the IBM Corporation.

Learn More
“Now, here, you see, it takes all the running you can do, to keep in the same place.”


Between May 2016 and October 2017 there will be a period of history marked by multiple challenges: a tsunami of climate-change powered ecological disruptions; a long list of untested international UN/Urban Habitat protocols about sustainability; inclusion and equity; the launch of new national policies; and a massive increase in horsepower, as provided by Big Data. These are, of course, in addition to the massive impacts of urbanization and the movement of refugees and displaced persons.

Thus opened the Meeting of the Minds’ Design Forum on” Shaping Smarter Cities: Where from? What’s Missing? Where To?” when a hundred and fifty urbanists, designers, planners, technologists and engineers gathered at the New School, New York City on May 31, 2016 to spend an afternoon considering the entanglement of three systems of urban relationships: Infrastructure, Urban Data Systems, and Human Social Systems. Following an introduction by the moderator, Gordon Feller, the space to be explored was framed by the host, William Morrish, urban designer and professor at The New School. Then the roles of these three systems were illustrated by Joseph Danko of CH2M Hill (Infrastructure), Kate Thompson of Deloitte Consulting (Urban Data), and Katherine Moriaki of the New School (Human Social Systems). A number of New School students produced a real-time graphic mapping the discussion.

Morrish began with the “space between”:

“The polis, properly speaking, is not the city-state in its physical location; it is the organization of the people as it arises out of acting and speaking together, and its true space lies between people living together for this purpose, no matter where they happen to be.”

Morrish framed the Design Forum in terms of reference, connection, and anchorage:

“What is possible for people to do with each other is largely a question of what it is that exists between, and how this ‘between’ can be shaped as active points of reference, connection, and anchorage.”


In Part 1 of the Design Forum, Danko portrayed infrastructure as the investment the city makes in itself to achieve certain evolving goals. High on the list of cities’ goals today are conservation and adaptation to climate change. Speaking of the critical roles played by water, he gave examples of how infrastructure can conserve water and still enable expanded green spaces and protect cities against coastal and fluvial flooding. Some of these investments are based on Natural Infrastructure, where CH2M Hill has an alliance with The Nature Conservancy, but unavoidably much relies on steel and concrete. 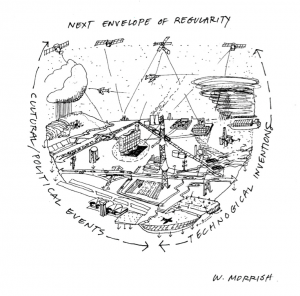 Such investments are expensive and he went on to illustrate investment models based on new revenue streams, such as dynamically-priced express lanes on congested roads, new funding sources such as urban agriculture and renewable energy, and the use of prediction and early detection to reduce maintenance costs. Such approaches must still take into account social and environmental sustainability. Bridging to Urban Data, Danko also argued that its inclusion in infrastructure planning and operations can lead to more choices, better service levels, and reduced costs through aligning the interests of public, private, and civic organisations. In closing, he proposed that infrastructure decision-making should focus on increasing its “Social Value” providing access to food, clean water, health care, education, housing, and job training.

In Part 2 of the Design Forum, Thompson further developed the role of Urban Data as a means to enable governments, civic organizations, and citizens to reach better decisions. She began by noting that many policy-makers involved in planning decisions are unfamiliar with modern modeling methods, in particular agent-based simulations, and hence do not understand the additional degrees of freedom and the broader ranges of the assessment of social, environmental, and economic impacts that these methods can bring. As a result, many large infrastructure plans are developed largely on intuition and case studies from other cities rather than through the collaborative sharing of data, goals, and methods.

The diffusion of technologies such the Internet of Things and Big Data analytical methods reveal how the flows of information among citizens, organizations, and infrastructure do not respect government silos. Rather, they combine to weave the rich tapestries that are the social and economic wealth of the city. Thompson then noted that if, as Danko argued, the goal of the city is to maximize the collective social, economic, and environmental benefits of its infrastructure investments, then new forms of governance are required. Those involved in the Internet of Things and Big Data have noted, worldwide, the difficulty that the public sector has in dealing with this challenge. Centuries old principles and practices and human nature impede such transformations, but the laggards risk being left behind in this New Urban Age.

In Part 3 of the Design Forum, Moriwaki considered the relationships between Information Technology and Human Social Systems. Early smart cities initiatives have been widely criticized for being technology-driven, but such initiatives have now evolved into broader approaches in which public, private, and civic sectors find new ways to exploit the innovation. Technology innovation at the urban scale invariably follows such a pattern. Innovators are highly motivated to thrust their invention into the public space with little understanding of its eventual roles and impacts and, if it proves to offer social, economic, or environmental value, it will become incorporated in the “between.” Societies invent technologies and then technologies re-invent societies.

The willingness of individuals and societies to permit such experiments on themselves is a healthy sign of curiosity and aspiration and leads to better use of the technology. Mariwaki drew on the Red Hook WiFi initiative as a strong example of a community taking control of how technology is deployed in their city and how this proved invaluable following the disruption of traditional cellular systems by Hurricane Sandy.

She also pointed to the opacity of Urban Data Systems, also a frequent characteristic of technology innovation. Urban Data Systems are largely invisible to the public and policy makers and their machinations are even more obscure. Hence their results appear ex cathedra and this will often increase citizens’ mistrust of government and, worse, disenfranchise those who are unable to benefit from their use. In this fast-moving field, we have yet to develop commonplace metaphors for what is going on. This is itself a design challenge.

As noted at the outset, urban life is in a period of massive and rapid changes, perhaps even more rapid and radical than those of the late 19th and early 20th centuries. Taking the metaphor of the city as a collection of stages for urban theater, how will we preserve the human interactions that these stages both enable and induce amid all the changes in both the casts and the sets? An afternoon of engaged discussion from the perspectives of Infrastructure, Urban Data, and Social Systems could not resolve the many issues. But we may hope that the ripples emanating from this one raindrop falling on the ocean may spread into ever-wider debates. Certainly it exemplified the “Meeting of the Minds”.