Mid-Sized Cities are the Future of Cities, Here are Three Reasons Why

Christiana K. McFarland is the Research Director of the National League of Cities. She conducts NLC’s major research initiatives, including Local Economic Conditions, City Fiscal Conditions and State of the Cities, and is passionate about conducting analysis that helps local leaders build strong economies.

The success of very large cities is well documented, as is the strife of small town America. Digging deeper, however, reveals an even more dynamic economic landscape at the local level. From this view, mid-sized cities emerge as those with the most potential to lead an inclusive economic future that bridges the urban-rural divide.

In 2017, I led a team of researchers on a study (Local Economic Conditions 2017) that set out to identify how specific economic factors come together and evolve into different types of local economies. We looked at 224 cities with various population sizes and locations in terms of proximity to metropolitan areas. We surveyed city leaders about the performance of key local economic indicators such as new business starts and availability of affordable housing, and identified five types of cities based on their local economies:

Among the five types of cities that we identified, mid-sized business boomers – such as Knoxville, Tennessee; Longmont, Colorado; and Raleigh, North Carolina- were the most likely to see great improvements in their overall economic performance over the past year (see Figure 1).

These mid-sized business boomers are on the top of my “cities to watch” list. This is because they share many positive economic attributes of “major job centers,” but since their growth is newer they have greater opportunity to plan for growth. For instance, both types of cities showed progress in the area of business expansions. While both are experiencing growth challenges in terms of the area’s housing affordability, the mid-sized business boomers have yet to experience the extreme downsides of growth, like significant poverty and high demand for basic survival services.

So, what’s contributing to the growth of these cities? And why is their growth so important for the future of all cities and for developing a sustainable, thriving, inclusive national economy? Here are three reasons.

While very large cities like New York, Boston and Los Angeles will continue to contribute outsized economic value to the national economy, challenges like the high cost of living and traffic are forcing economic activity to other areas. In an online discussion in August 2017 about suburban vs. urban resurgence, Bloomberg View columnist Noah Smith notes that “the great urban revival” is not ending, it’s perhaps just relocating. He believes it’s a good thing for the economy as smaller places grow, develop and become more productive.

The numbers back up his opinion. Between 2010 and 2015, mid-sized metros (that is, regions with populations between 250,000 and 5,000,000 in 2010) had more people moving into them than anywhere else in the country (see Figure 2). Residents came from larger metropolitan areas, as well as smaller metropolitan areas, micropolitan areas and very rural places. In addition to high growth of domestic migration, increasing numbers of immigrants are also choosing to settle in mid-size cities, contributing to significant population diversity in these areas. 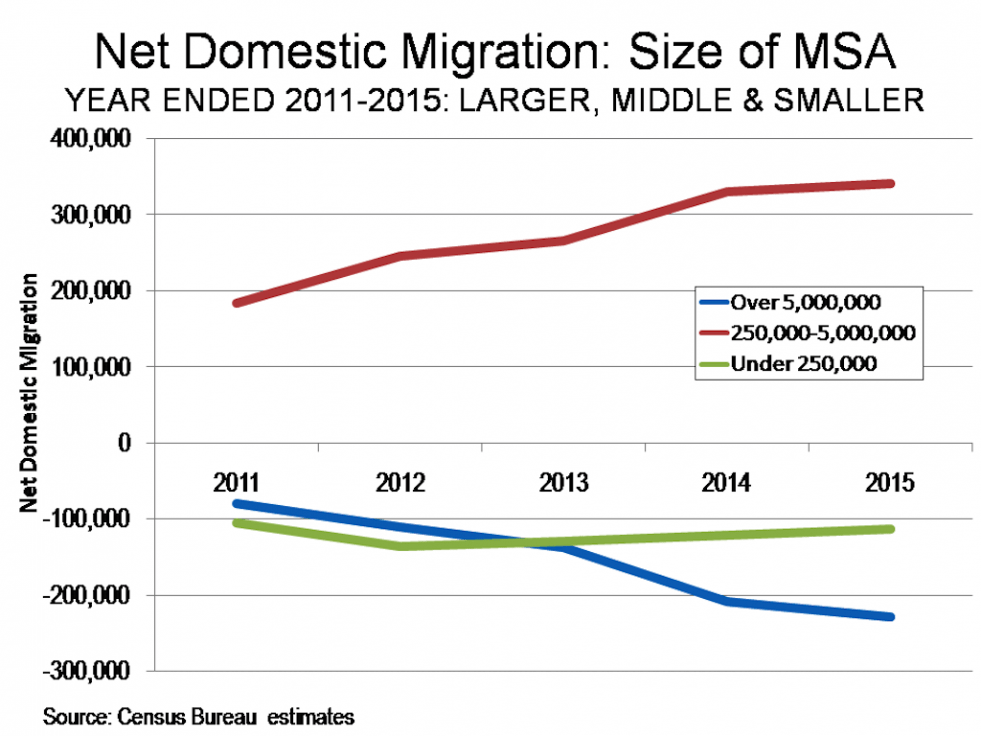 The opportunity-rich business ecosystems of many mid-sized business boomers contribute to this robust in-migration. Of the five city types we identified in our research, these cities were the only type experiencing overwhelming new business starts while also experiencing expansion of new businesses (see figure 3). 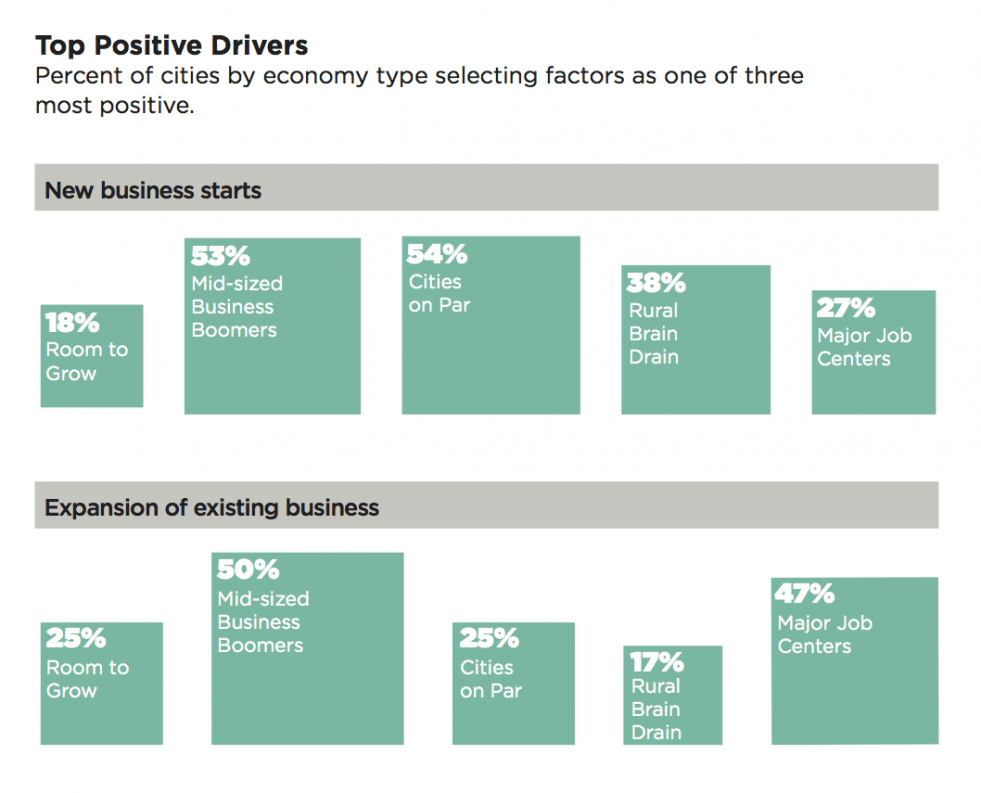 We know that growth from within, in the form of new businesses and business expansions, is the foundation of long-term economic sustainability. For example, the Kauffman Foundation found that new and young companies are the primary source of job creation in the American economy, while fostering competition into markets and spurring innovation.

Many mid-sized business boomers are home to major research facilities, an affordable cost of living and cheaper cost of doing business, with less competition and barriers to entry than larger cities. For start-ups, these factors are necessities. Longmont, Colorado, for instance, has situated itself as the next great Colorado start-up hub, and possess most of these attributes. PC magazine even named Longmont the city with the fastest Internet service in the country in 2017 — outperforming Kansas City, Mo., and Austin (interesting side note: PC mag observes that the best hope for “mega fast” internet service will come from local utilities like Nextlight in Longmont, not major private providers). Area high schools are even paying their students to work with local tech firms.

3. Both Urban and Rural

Although the phrase “urban-rural divide” has become a bit of a cliché when it comes to describing the different ways that various areas have fared in the nation’s post-recession economy, how we define “urban” and “rural” really matters. In fact, much of rural America actually lives in metropolitan areas. The Brookings Institution’s Metropolitan Policy Program found that more than half of people who live in rural areas also live in counties that are part of a metropolitan area. In other words, rural areas may not be as disconnected from cities as some may think.

This is particularly true in regions of mid-sized business boomers. For example, 30 percent of the entire Knoxville, Tennessee metropolitan statistical area (MSA) is rural, with five out of nine counties in the MSA made up of residents living in rural areas. In contrast, only 10 percent of Boston’s MSA is rural. Based on my census calculations, the area doesn’t have a single county where more than a third of the residents live in rural areas, including less densely populated counties in New Hampshire.

As the plight of rural America continues, creating regional solutions that connect rural areas with their urban neighbors is more critical than ever. Because mid-sized metros have lower barriers to entry for new firms, more affordable cost of living, closer cultural ties to rural areas and robust (but not daunting) business and population thresholds, these cities provide the perfect testing environments for improving, creating and developing university-industry partnerships, supply chains and labor markets to connect rural and urban areas.

The characteristics of mid-sized business boomers as population hotspots, opportunity-rich business environments and having unique balance of urban and rural situate them well to lead the future of cities. Their success will depend on their ability to manage growth in an equitable, intentional and proactive way, to forge regional solutions with their rural neighbors, and to harness the power of existing and new populations and business.