Meeting of the Minds 2015 Hackathon Recap

On October 17th and 18th, The Meeting of the Minds (MOTM) Hackathon brought together designers, developers, and entrepreneurs to hack on social good projects focused on the city of Richmond. It was the first hackathon ever held in Richmond, CA and was sponsored by Qualcomm and Microsoft. The Hackathon set out to provide urban sustainability solutions to social, environmental, and technology issues facing the city and its residents. The City of Richmond staff – including the Mayor’s Office, IT Department, Environment Program, and others – were great partners and provided datasets and key issue areas for the hackathon teams to focus on. The hack was held in the historic Ford Assembly Plant – the Craneway Pavilion – along the beautiful waterfront at the southern edge of Richmond, with amazing views of the San Francisco skyline!

The level of talent and creativity on display at the hackathon was pretty amazing to see. Tasked with creating solutions that focused on the city of Richmond, the participating teams did not disappoint. Developers came out in full force with a number of interesting projects ranging from collaborative workout apps to hardware driven solutions. After the initial presentations by the sponsors, everyone had the chance to devise ideas and form teams to make these projects happen. With a total of six teams, the room was alight with excited plans of what the weekend would hold!

Hack kits were provided by OSIsoft, World Programming, and Microsoft. Qualcomm also stepped into the game to provide Dragon boards and Gimbal brought Bluetooth beacons. All in all, there was quite a bit of tech to be hacked with as well as a number of urban sustainability issues that were kicked around.

So What Is a Hackathon?

The word “hackathon” is a mashup of the words “hack” and “marathon”. Hacking refers to innovative team-based solution building (hacks) to an existing problem within a short time-frame. Typically 24 hours is the length of a hackathon, but these events can be as short as 9 hours and as long as 48. Companies like Facebook and Google and other organizations have applied this method of innovation to solve their biggest internal challenges. This concept is now being applied to industries besides technology and, in this case, the entire city of Richmond!

More specifically, a hackathon is made up of the following:

The Wikipedia definition of a hackathon reads:

“… An event in which computer programmers and others involved in software development, including graphic designers, interface designers and project managers, collaborate intensively on software projects. Hackathons typically last between a day and a week. Some hackathons are intended simply for educational or social purposes, although in many cases the goal is to create usable software.”

With amazing food served by Bubbaloo Cafe, a local restaurant, the attendees were well fed and properly caffeinated for the long haul. Good food, plus solid wifi and plenty of space to spread out are all essentials of a great hackathon and the teams used the time to come up with a number of great solutions.

Why Run A Hackathon with the City of Richmond?

The city of Richmond is an unknown hotbed of innovation in the San Francisco Bay Area. The Meeting of the Minds summit chose Richmond to convene 400+ urban sustainability leaders because Richmond’s progressive leadership and innovators are implementing cutting-edge policies, attracting and supporting new incubators and sustainable businesses, and carving out a new post-industrial identity. Pogo Park, the new Greenway, Urban Tilth’s new 3-acre urban farm, new housing policies, Marin Clean Energy’s community choice aggregation model, community-led policing, a new Climate Action Plan, the new UC Berkeley Global Campus, ferry service to San Francisco starting in 2017, and the rethinking of the Point Molate Historic District are just some of the exciting and cutting-edge projects happening in Richmond right now. The hackathon was a great way to quickly build upon some of the activities in Richmond and bring a new group of designers, coders, and entrepreneurs to apply their talent towards solving urban issues facing the city. The goal was to:

Who Won The MOTM Hackathon?

A total of six teams competed in this year’s Hackathon. The competition was tough and each team came up with fantastic urban sustainability solutions for the City of Richmond. The winning team received $5,000 cash prize awarded by Qualcomm.

The top three teams were Team Stride, Team Rootid, and Team Labor2Day. Each of these teams went on to present on stage in the plenary session at Meeting of the Minds 2015.

A round of applause for the top team:

MOTM Hackathon Winner ($5000) – Team Stride – The “Let’s Stride” project is a community and health fitness app designed to use the neighborhoods you live in as an obstacle course to get fit. The idea is to leverage the natural surroundings to improve physical fitness and also incentivize activity by involving local businesses / restaurants. This team hailed from Stride Center in Oakland, CA. 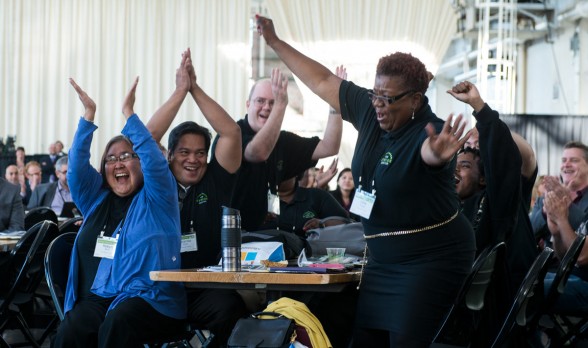 Here is the full list of projects/teams that participated in the Hackathon:

To get in touch with any of the hackathon teams about their apps, please contact Jessie Hahn at jessie@cityminded.org.