Jennifer Thomas is the Chief Strategy Officer at Digital C, where she is charged with creating a strategic plan for operations and program implementation.

In the last week of October, from the 23rd to the 25th, over 420 people descended on the Global Center for Health Innovation in Cleveland to attend Meeting of the Minds. For their 11th annual summit, Meeting of the Minds came to the Midwest from San Francisco after a whirlwind tour of Cleveland on a freezing cold January day. When Meeting of the Minds executive director, Jessie Feller Hahn stated “I want to get an apartment here!” I knew we were good to go.

Participants came from all over the U.S. and 11 countries, and along with the Cleveland Clinic’s Medical Innovation Summit held simultaneously at the Convention Center, sold out hotels in the area and created an innovation buzz in downtown. Meeting of the Minds participants didn’t just sit in a darkened (albeit, comfortable) conference room listening to smart people share real and awesome examples of how technology and innovation is making cities more resilient and efficient. They also got out into our neighborhoods to see firsthand how innovation, technology, creativity, and quiet persistence are transforming Cleveland’s culture and future with 21st century assets.

People from around the globe were wowed by our 23,152-acre park system and you should be, too. Metroparks CEO, Brian Zimmerman, led a tour that gave participants a hands-on demonstration of a web-based, GIS green infrastructure project site selection tool. The use of which means that the park wants to ensure that any new physical development integrates with, respects, and complements our beautiful park and trail system. The park is using technology to enhance our enjoyment of nature, while preserving it at the same time.

Erika Anthony, senior director of advocacy, policy and research at Cleveland Neighborhood Progress, was able to show off the development of new, safe, and sustainable Cleveland neighborhoods. She detailed how our legacy city has strategically approached the infamous “ground zero of the foreclosure crisis” moniker to think beyond just housing and include education, job opportunities, arts, and vacant land re-use when revitalizing a neighborhood.

Our lakefront neighborhoods have a unique twist, which Councilman Matt Zone and colleagues illustrated last week. Participants were amazed by Cleveland’s true mixed-income economic development strategy that has preserved neighborhoods such as Gordon Square, the Flats East Bank, and Ohio City, allowing them to serve a variety of residents, while still offering hip and attractive entertainment and retail amenities. A key feature of the tour was how Cleveland has increased access to its most coveted asset: Lake Erie. The conversion of the West Shoreway, a former lakefront highway, to a reduced-speed boulevard, included four pedestrian entry points to Edgewater Beach Park, bike lanes, and a vehicular underpass for residents. This transformative project increased access to and enjoyment of the water front for all Clevelanders.

No longer used for industrial waste but revered as it should be, Lake Erie is home to 20% of the world’s fresh surface water. Cleveland Water Alliance is determined to transform the way we use and protect this precious asset through growing the region’s emerging ‘blue’ economy and catalyzing the creation of the first ‘Smart’ Great Lake. Through water innovation, research and challenges that utilize sensor technology, instrumentation and data analytics, the Water Alliance is finding ways to better manage a variety of Great Lake and supporting watershed challenges, including work to prevent, detect and respond to the growing problem of harmful algae blooms, putting Cleveland at the forefront of fresh water innovation.

NASA Glenn Research Center demonstrated its growing commitment to tech transfer, highlighted through the radical increase in the number of technologies licensed to outside companies from prior years. The tour emphasized NASA’s technology in the tires of the Mars Rover, but the real crowd pleaser was the showcasing of an innovative alloy metal with memory – stretch it, bend it, then heat it up and it springs back to its original form.

Case Western Reserve could barely squeeze the sold-out crowd into its space to demo the Hololens, an augmented reality project that is changing the way medical school is taught. Wearing state-of-the-art headsets, participants got a chance to interactively engage with the human skeletal and nervous system, analyzing details that usually only medical specialists can see.

DigitalC’s own director of programs and partnerships, Liz Lazar, took her group to a homeless shelter, not an obvious innovation haven unless you want to see the newest technology in connectivity. Siklu’s millimeter wave antennae now connect nine Cleveland locations, including six public housing facilities, the Lutheran Ministry Men’s Shelter and a charter school, to the fastest residential broadband internet available in the region. This project has changed residents’ lives and gave the world a peek at how Liz pulled together the various tech and non-tech partners to get it done.

The Cavs 2016 championship win earned the team a permanent top spot in our collective Cleveland hearts. But, we didn’t realize the extent of their leadership in digital. The Cavs are trailblazing when it comes to using data and digital outreach to enhance the fan experience, increase player performance, and deliver content. They have an impressive digital team behind the scenes for this reason: only 1% of their fan base comes through the Q, the other 99% connect to the team digitally! It’s a global business with top tech talent. Go Cavs!

Meeting of the Minds provided our smart, creative, and tech-minded leaders the opportunity to unveil our 21st century assets, feel proud, and show off a little. The 450 attendees were a tiny fraction of the world who need to know of Cleveland’s progress, and that we have taken our inherent grit and determination and turned it into green space and water conservation, technology products and research, modern affordable housing, and digital programming, not to mention a sports powerhouse. Let’s keep the momentum going, embrace an innovation culture and find more opportunities to build on our strengths.

See photos from the Meeting of the Minds Annual Summit in Cleveland, OH 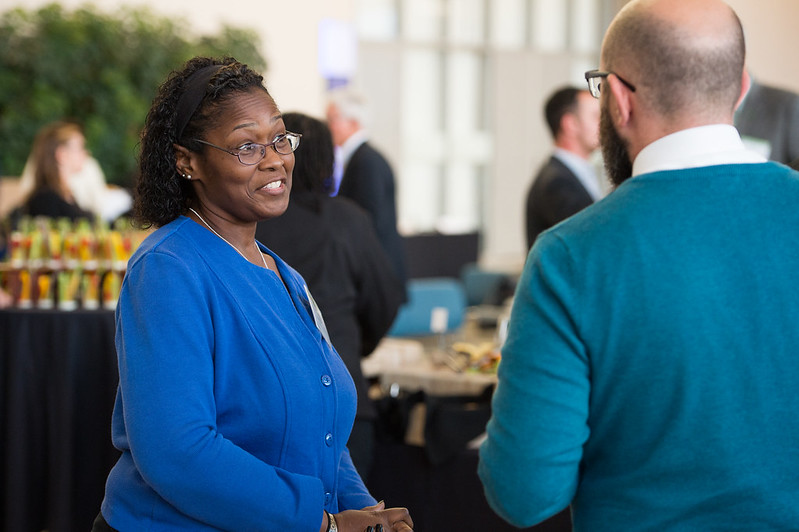