Hannah Greinetz holds a BA in Anthropology from UC Santa Cruz and an MBA in Sustainable Management from Presidio Graduate School.

Money. Our main cultural store of and standard for value, and unit of exchange. We know that our economy runs on it, that we depend on it, and that some federal agency governs it. In the midst of the movement to build sustainable systems for our cities, money is often the missing piece of the equation. I’ll go into a little more detail below, but looking at our current monetary and banking system, money is the most centralized and controlled resource required for rebuilding our systems. Fortunately, alternative currency systems and methods for exchange are underpinning the movement towards local and sustainable economies, and are strengthening the communities they operate in. Community currencies can make our local economies much more resilient to economic volatility, effectively empower economically-marginalized populations with an inclusive and accessible form of exchange, and contribute to the movement for economic democracy by giving communities the power to design and issue their own currencies.

Our current economic system cannot operate without a banking system; our banks serve two main purposes for our economy. First, they back our currency and operate a payment system so that money can flow between factors of production and actual goods for sale. This concept, the Circular Flow of Income, is illustrated (overly simplified, and without accounting for externalities) here: 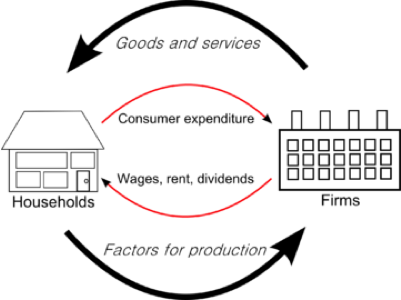 The second key function of banks is to make loans – this is what increases our money supply, and drives economic output and activity, including jobs creation. More of all of these is what drives local economies, personal incomes, and drives innovation and community improvement. But loans are also inherently creating money out of debt; so that money is created in the amount of the principle, but not for the amount of interest on the loan. Additionally, loans are issued by banks whose interest is in the rate of return on their investment, not on the rate of return to the community which needs better schools and more access to healthy food; these are assets that make the community richer but don’t add value to a bank account, so they’re not funded by our banking system.

Enter a local community currency – different from a digital alternative currency, like Bitcoin. A local or regional currency is one that can be earned and traded within the community. Local currencies have the option to add value in addition to a numeric monetary amount, which they do with an aim to add value to the community and local economy that they operate within. Alternative currencies can work as time banks, adding value to volunteer work and time spent helping out in ways specifically needed, or to a business or individual lending out their tools and supplies to other community members. Japan’s current economic recession is resting in part on a lack of childcare and care for elders in the community. One of the solutions in place is time banking in which residents can earn hours to their credit for time spent caring for their neighbors’ kids or helping out running errands for a community elder. This same idea is put into practice in what’s touted as the oldest alternative currency circulating in the US: Ithaca Hours in Ithaca, New York. Each paper note printed denotes the amount of value for the labor hours put into the program, and can be spent at participating local retailers, in exchange for fresh produce, and for a range of goods and services in the community.

Local and alternative currencies also provide a buffer against economic recessions by allowing the local economy to operate on a currency other than the dollar, which is tied to our national and international monetary policies and debt levels. A local currency helps to insulate the local economy and keep wealth in the region, which is not a new idea – {Greenbacks} were issued for the same purpose during the American Civil War, as were British {Treasury Notes} and German {Kriegsgeld} during the First World War. Local currencies like these are designed to function just like the traditional currency, but can be spent only locally. They are most often printed and then distributed at a discounted rate to encourage adoption.

In Switzerland, the WIR (the German word for “we”) functions as a mutual credit system. When a buyer makes a purchase from a WIR participant, the seller receives credit in a WIR account. The credit can then be spent by purchasing something from anotherWIR participant. Economists have monitored the WIR since it began in 1934, finding generally that when the economy goes up, the turnover in WIR decreases, and sooner or later, when business people cannot sell goods in Swiss Francs, they go onto doing business in WIR again. This alternative for business effectively creates a buffer against economic recession by acting as a sort of built-in stimulus to business when the economy is in a cyclical recession. With current (and ever) volatile economic circumstances, people are much more open to ideas for alternative currencies, and programs like the WIR are being piloted in Belgium, France, and Germany.

The quickest way to understand why thriving local economies are important is by looking at the multiplier effect for spending and investing locally:

Berkshares, a local currency of the Berkshires area in Massachussets, is the most successful example of a regional currency in the US. Since the currency’s launch in 2006, several local banks have acted in support and have printed millions of ‘dollars’ worth of paper notes for circulation. Berkshares were created with the aim of bringing business back to the local economy, as the stores on Main Street were going out of business, while community residents were starting to buy exclusively online and from national chains. Berkshares has restored conversation and community engagement to the act of doing business in the Berkshires; it has people spending their money at local stores, having conversations with the store owners, and hearing about what it’s like to do business in the community.

In case you’re thinking about closing your Swiss bank account and investing your fortune into your local economy, don’t do it thinking that you’ll be avoiding US taxes. Local and alternative currencies are taxable income, and most are pegged to the US dollar – Berkshares are valued at about $.95 per Berkshare.

This year, California passed the California Alternative Currencies Act, which clarifies and updates the California Corporations Code to state in unambiguous terms that the use and distribution of currencies other than the US dollar is not illegal. Although alternative currencies have never been illegal, this is seen as an important step in supporting the creation of more reform, decentralization, and thus, resiliency in our monetary system.