Kate Gordon is a nationally-recognized expert on the intersection of clean energy, climate change, and economic development. She was the founding director of the Risky Business Project, which quantified the economic impacts of climate change in the U.S.

The United States seems to be suffering from a multiple personality disorder when it comes to climate change. On the one hand, partisan divides in Congress continue to prevent the United States from passing a comprehensive federal policy—including, but not limited to, a price on carbon—to spur the necessary transition to a low-carbon economy. Given the current political climate in Washington, this doesn’t look like it’s going to change any time soon, and in fact, research shows the issue may be even more politically polarizing than it was a decade ago.

But there are at least two other sides to this split personality.  States and cities are taking up the climate action banner with a vengeance, most recently with the statement by 1200 governors, mayors, and business leaders making clear that though the President may have withdrawn the U.S. from the global climate accord, others are prepared to continue the work to reduce emissions by scaling up renewable energy and efficiency, and by working to pass regional carbon prices where politically possible.

The private sector is also increasingly focused on the real risks to investments and supply chains from unmitigated climate change. Large corporations are directly investing in renewables to reduce their climate impact and lock in long-term energy prices, while also working to reduce energy use overall throughout their supply chains. It has become clear that climate change will pose billions of dollars of risk to private businesses, with impacts ranging from heat-related labor productivity declines to coastal property flooding and inundation. Corporate action in response to these challenges isn’t always public, but it is happening at more speed and scale than ever before.

But there’s one area where local actors, and especially city managers and planners, could step up and do more. Incorporating climate risk into infrastructure investments would allow U.S. cities to become more resilient, reduce reliance on volatile fossil fuels, and facilitate the transition to a more sustainable, low-carbon economy. What’s not to like?

A Better Road to Infrastructure Investment

Infrastructure is a place where climate action, business interests, and political will have the potential to intersect. Infrastructure investment tends to be a bipartisan, business-friendly policy, in large part because the need is so great. The American Society of Civil Engineers estimates that the United States will need to spend $3.6 trillion between 2010 and 2020 to simply maintain our current transportation, water, and energy infrastructure. Yet there is an estimated funding shortfall of $1.6 trillion, or approximately 45% of the total requirement. In the American Society of Civil Engineers’ Infrastructure Report card, most infrastructure categories received a D+, with only one category, solid waste infrastructure, receiving a B- or higher. 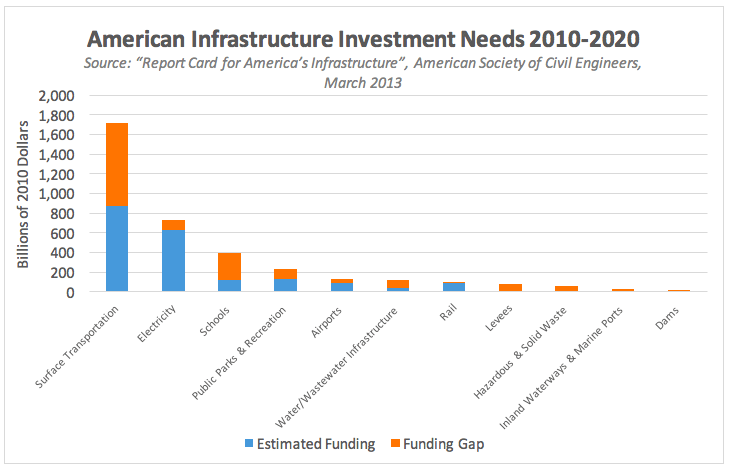 The need is greater than the current investment, but that is not to say investment isn’t happening. Globally, the OECD has estimated that approximately $90 trillion will be invested in new infrastructure between 2015 and 2030. The question is not whether these investments will happen, but how they will happen. As the OECD states in its recent infrastructure report, “By default or by design, these investments will affect countries’ resilience to climate change.”

The strong political backing and clear economic benefits of infrastructure investment make it an ideal vehicle through which local governments should approach climate policy.

Infrastructure—whether transportation, energy, or water—is by definition the kind of place-based, long-term investment most vulnerable to physical climate risk.

Once you build a road, it’s hard to move it; ditto for a power plant or water treatment facility. Therefore, infrastructure policy offers a critical opportunity to incorporate climate risk assessment (to address impacts that area already “baked in” to the system) and mitigation (to help reduce future impacts) into the initial bill or regulation design. For example: within the next 15 years, higher sea levels and increased hurricane activity from climate change will likely cost an additional $7.3 billion in damaged costal property and infrastructure annually in the United States. Incorporating climate risk planning into new coastal infrastructure investments would make businesses and local economies more resilient to climate change. 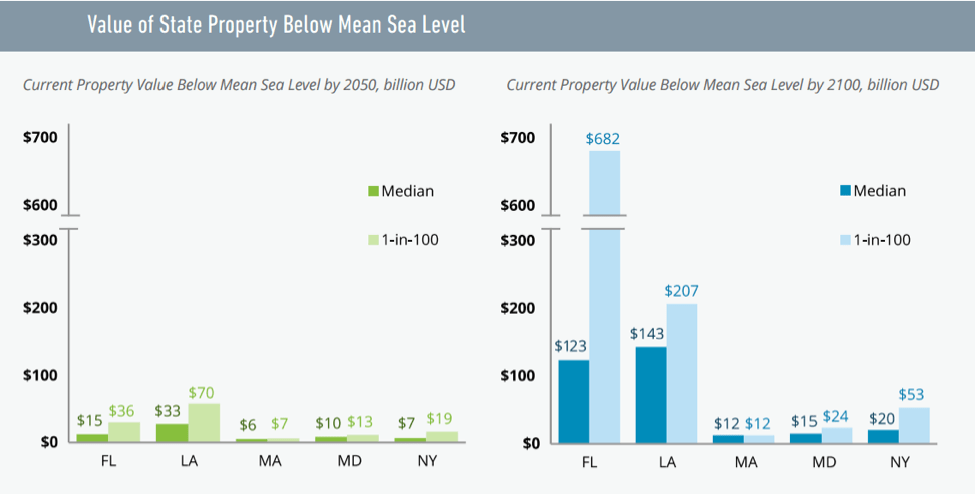 Some local governments and agencies are already trying to incorporate physical risk planning into their investments:

But these examples are still few and far between, and largely inconsistent with one another in regards to the type and extent of risk analysis they require. In an exhaustive analysis of government actions taken to account for climate risk, the OECD recently concluded that “[t]here are no commonly agreed methods of reporting climate risks. Several new voluntary initiatives are emerging from investors, as they increasingly recognise this information’s relevance for their investment decisions.”

More importantly, these examples are mostly still focused on side projects to create more open spaces and build up berms and sea walls, rather than on truly mainstreaming climate risk reduction as part of all new public infrastructure investments.

This is an area where government truly can learn from business. More and more companies and investors are working to mainstream material climate risks into their decision-making. It makes sense that business would lead here: after all, no one is better able to identify and catalogue these kinds of very specific risks than the businesses for whom they are a real threat to the bottom line. No mayor or city manager, no matter how dedicated, can fully understand the range of physical assets and associated climate risks that make up the complex and diverse local economy. That’s why efforts like the Bay Area’s San Francisquito Creek Joint Power Authority, which brings together county and city planners with heavily-invested companies like Facebook to update floodplain data and re-think real property investments that will likely face future flood risks, are so important. Such public-private partnerships allow for knowledge exchange and information sharing at a level—and at a speed—that is simply impossible using only government resources.

On the flip side, many businesses currently lack the kind of climate data necessary to fully understand how a changing physical climate will affect their projects. Government can bring data and science to the table and allow engineers to better incorporate climate risks into infrastructure project design. Government research can also highlight new and innovative solutions to reduce the carbon footprint of new construction. For example, cement and steel, the core of most major infrastructure projects, are major sources of greenhouse gas emissions, accounting for 8% of greenhouse gas emissions from manufacturing in the United States. Making sure that new infrastructure investments are also low-carbon, for instance through using concrete with carbon sequestration or recycled steel, would help reduce the climate impact of new construction.

Regulation Can Be Good Politics

Accounting for climate risk in infrastructure planning should not be seen as yet another layer of regulation. Rather, it is simply a should be taken as a mainstream business risk approach, and a safeguard on taxpayer spending that will insure these scarce dollars are invested in a prudent, far-reaching way. This should appeal across political boundaries.

Ultimately, if the public sector commits to disclosing and minimizing its own climate risk, and to asking government contractors to do the same—all while ramping up infrastructure spending and creating jobs—the cost of climate impacts will slowly and steadily be internalized into public and private sector investment practices. And that, in turn, will slowly and steadily reshape public infrastructure into something that can safely anchor a low-carbon economy.