Lessons Learned from a Concrete River

Kelsey Jessup is a Project Manager at the UCLA Luskin Center for Innovation where she leads the Urban Greening Initiative.

Like many Angelenos, you may only be familiar with the Los Angeles River thanks to movies like Grease, in which Danny beats his nemesis in a car chase along the concrete riverbed.

But the Los Angeles River is now center stage in discussions of open space and recreation, active transportation, regional watershed management, ecosystem restoration, climate resilience, and public art transforming the LA region.  The river winds through 51 miles of industrial lots, open space areas, and residential neighborhoods. In the most populous U.S. County, the LA River has potential to serve millions of people. 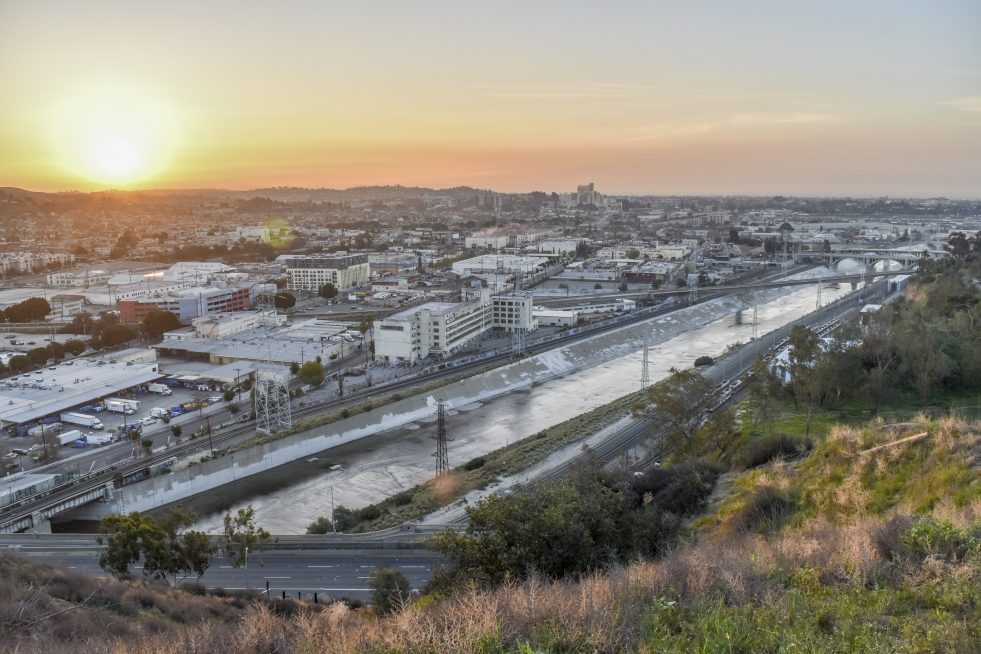 History of the LA River

The LA River was home to the Tongva people for thousands of years before the Spanish began to settle the area in the 1700s. While the river was dry nine months of the year, for three months the river was wild, changing course unpredictably and regularly flooding the region. Sediment from the San Gabriel Mountains combined with the natural irrigation from flooding created a perfect combination for rich agricultural land. The LA River created an ideal spot for the City of Los Angeles to grow. 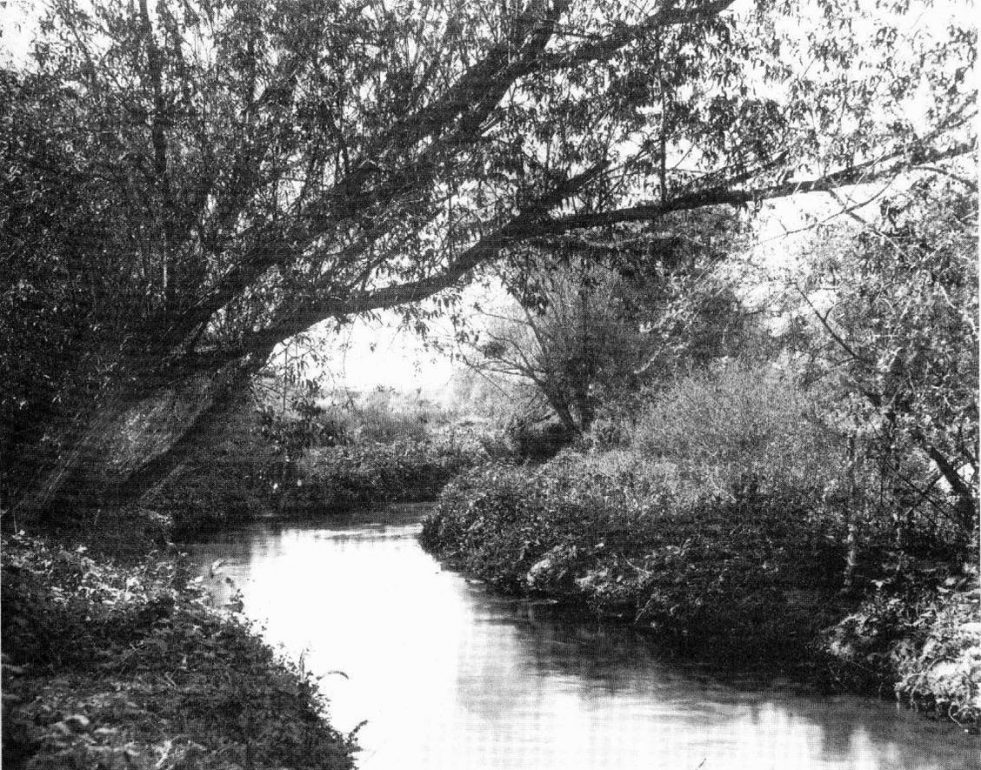 For many years, people avoided building infrastructure and undertaking development in the flood plain of the meandering river. However, over time, housing development encroached on the river, increasing flood risk to the growing population.

After devastating floods in the 1930s, the U.S. Army Corps of Engineers began channelizing the river as a means of flood protection. Today, all but three sections of the river are lined with concrete. The channel acts as a water freeway, flushing rain and runoff away from development and into the ocean. 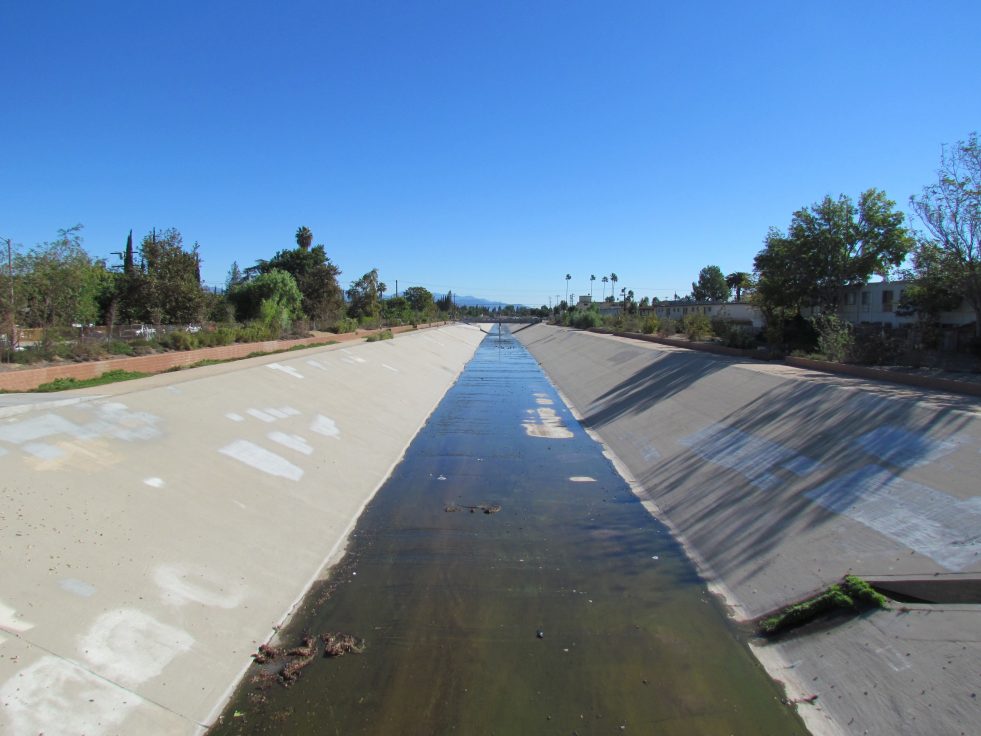 But enthusiasm among Angelenos is growing around visions for the LA River. For the past few decades, community, nonprofit and government entities have been working to revitalize the river, transforming it from a flood control channel to a public amenity. Master plans describe a riverbed populated by native plants and birds, lined with biking and walking paths, and decorated with public art projects. Green infrastructure along the river could help lessen storm water runoff, connected pathways could provide respite for commuters from heavily trafficked freeways, and native plantings could ease stress for residents in densely populated neighborhoods. 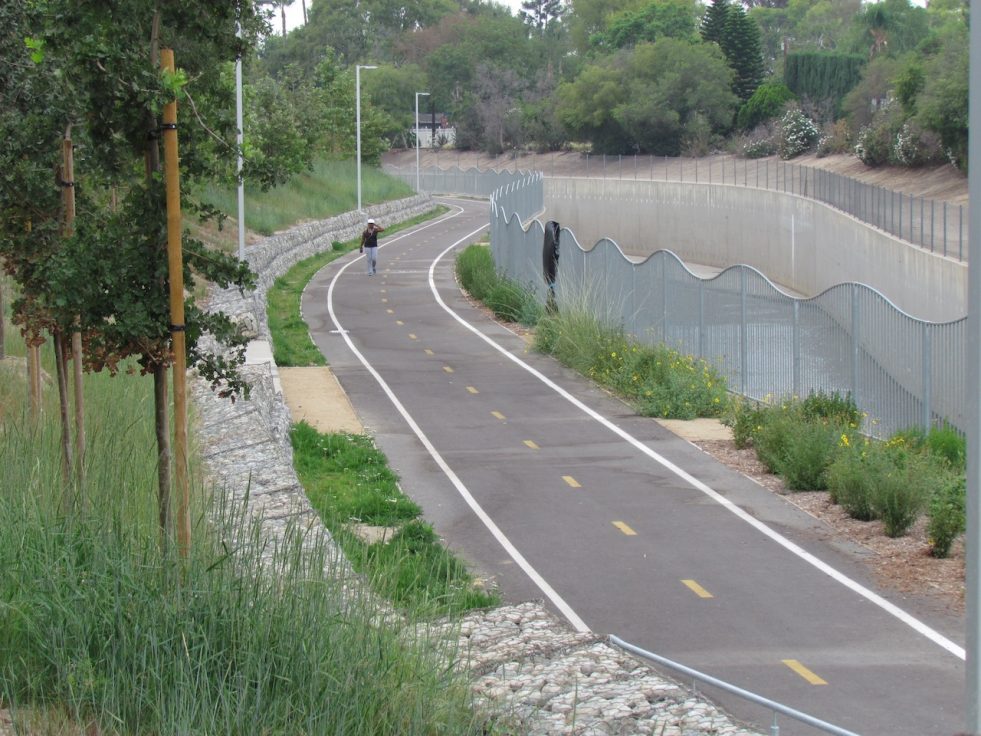 A New Vision for Cities

Cities across the globe are rethinking their urban environments. Nature has become increasingly important to city dwellers. Communities, nonprofits, and governments recognize the physical and mental health benefits associated with spending time in nature. Still, Los Angeles and other cities face challenges as they start to revitalize, restore, and reimagine their urban environments. The LA River is mired in complicated governance and ownership. In some areas, it is also physically inaccessible due to existing infrastructure such as railroads. It also remains a flood hazard.

In 2016, the UCLA Luskin Center for Innovation released the “LA River Greenway Guide” to help community leaders, nonprofits, and government agencies overcome the challenges associated with implementing projects along the LA River greenway. While the examples are specific to the LA River, the lessons learned are applicable to any urban area seeking to implement revitalization projects. 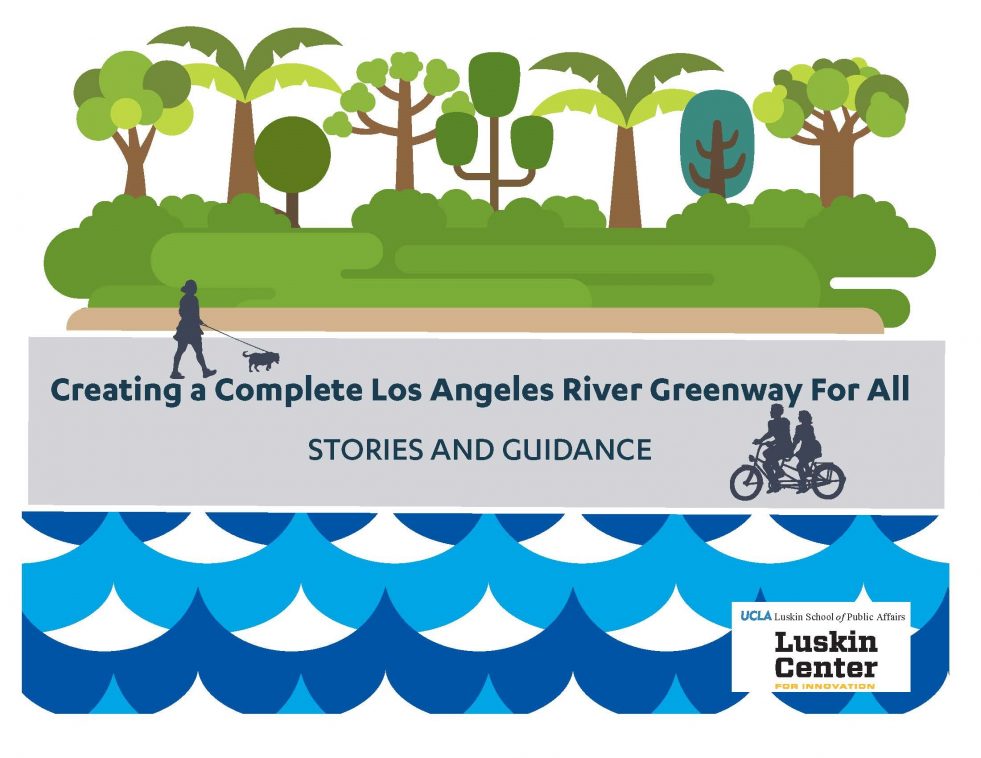 The UCLA Luskin Center’s Guide profiles 14 projects that were successfully implemented along the LA River’s greenway (an active transportation, open space, and recreational corridor along both sides of the 51-mile river). The Guide is organized by project type: 1) community access, 2) parks, 3) pathways, and 4) bridges. This is a simplification because many projects include a combination of improvements rather than only one greenway feature. 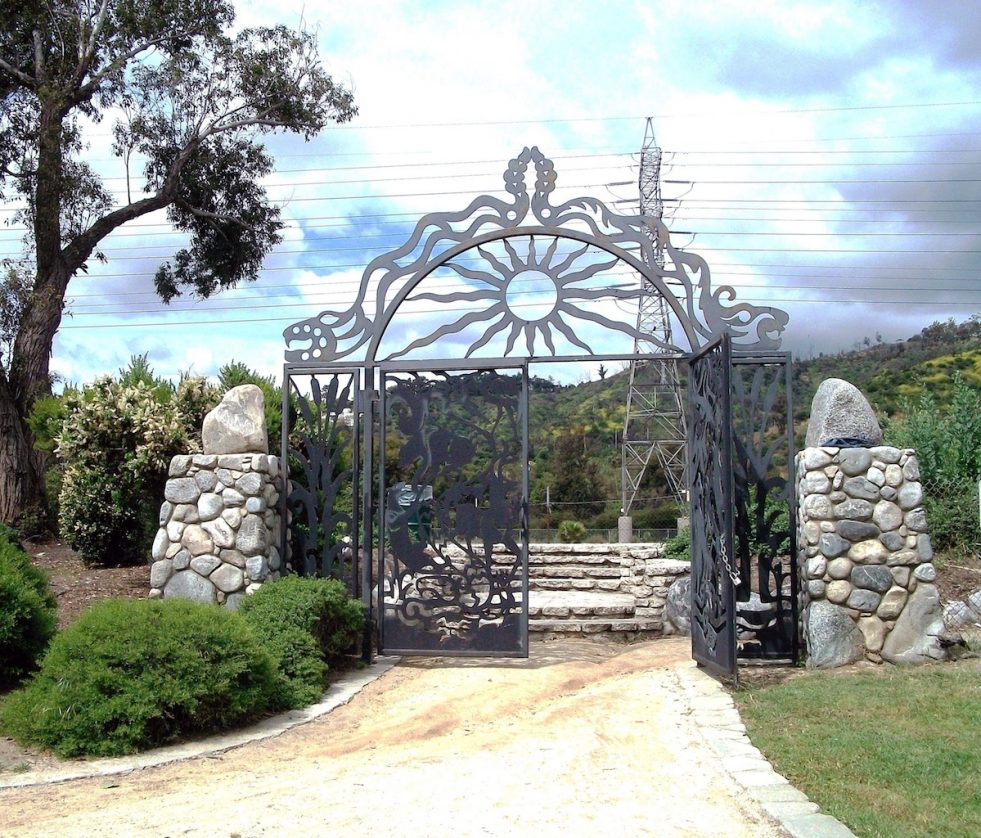 For each project type, the Guide offers definitions, context, and distinguishing elements of the featured project. Case study details are presented, each with specific lessons learned and solutions for overcoming common development challenges. Below are some of the major lessons learned that could be applied to revitalization projects around the world:

In Studio City, a community organization, the Village Gardeners, constructed the North Valleyheart Riverwalk in collaboration with the Los Angeles County Flood Control District. The Village Gardeners identified this opportunity because local residents were already using the area to access the river. The organization used cues from the community about what they wanted in their neighborhood.

2. Engage and empower local communities from the beginning of project conceptualization.

Involving the community early in the process can provide critical support to drive a project forward. Early community support for a project can also help avoid delays at later stages. Local residents who know the area can provide important perspectives on how to design a project to maximize community benefit and avoid or address potential unintended consequences associated with it. For Marsh Park Phase II development, the Mountains Recreation and Conservation Authority (MRCA) asked residents what amenities they would like to see at the park. This resulted in a park that serves many users and age groups.

The Luskin Center aimed to create this guide to specifically serve community groups. While we still hope that it can, we realized through our research that the most successful projects were all the result of collaborative efforts. For example, the River Project, a small nonprofit organization, worked closely with the County of Los Angeles to implement their Valleyheart Greenway project. The River Project drove productive community engagement and design development, while the County of Los Angeles led the construction efforts for the project. Their cooperation led to a streamlined and efficient approach to project implementation.

When projects are extended over long periods of time, stakeholders can lose enthusiasm. Project construction can feel like a burden despite the promised benefits at the end of development. Breaking a project into stages will reveal benefits sooner, maintaining engagement and excitement. For example, the MRCA broke their greenway project, Marsh Park, into phases. The first phase created a half-acre park that features open space with native plants, public art, picnic areas, and storm water infiltration areas. This stage of the project was opened to the public seven years before the larger park opened as part of phase II.

Parks and other greenway projects can include green infrastructure to manage storm water, educational programming to serve local youth, fitness equipment for adults and seniors, and other features offering a range of benefits for the community. Communicating the multitude of potential benefits from a project is critical for securing funding as well as garnering stakeholder support. For instance, the City of Glendale worked with consultants and residents to develop a vision for their bridge project to be a destination in and of itself, not just a way to get from one side of the river to the other. The vision reflected the community’s values and also provided a strong narrative to secure funding.

6. Be creative about funding strategies.

Securing funding for projects is often a challenge. Creative strategies can help:

Don’t wait until the end of project implementation to consider operations and maintenance. Project leads can work alongside designers from the beginning to select plants and materials that will minimize future maintenance needs, identify partners that can take on maintenance long term, and build in funding for operations and maintenance. For example, during development of Sunnynook River Park, the City of Los Angeles’ Department of Recreation and Parks agreed to operate and maintain the park and it was that agency, not the project lead, that entered into 30-year use agreements with landowners.

8. Think about the big picture.

How does your project fit within the larger ecosystem? Visions, policies, and plans are critical foundations to support the revitalization of any urban amenity. But it is project implementation that will bring the vision to life. Consider how your project may connect with other existing amenities. Could your park connect to a nearby pathway making it easier for residents to easily access the neighboring park? Is there a network of green spaces that you could expand, increasing connectivity for wildlife?

For the LA River greenway, connectivity is key. A complete and connected greenway could result in numerous social, health, transportation, and environmental benefits for the region. 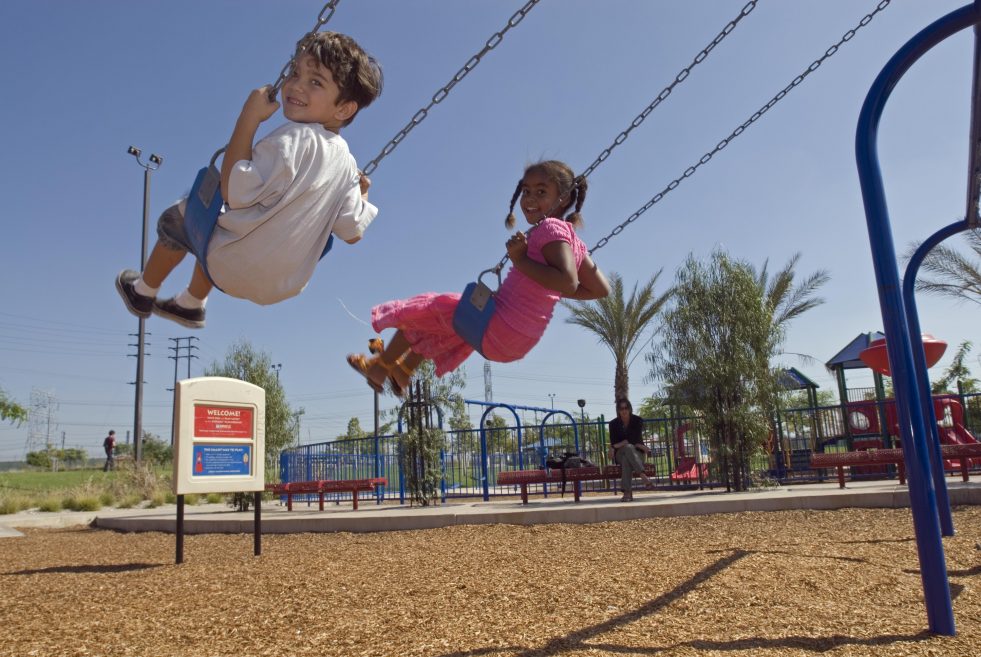