LA vs SF in Battle for Tallest Building

In the heart of San Francisco, Salesforce Tower, at 1,070 feet and 61 floors will rise far above other San Francisco buildings. Opening in 2017 and occupying a full city block, the Tower’s 1.4 million square feet of office space is offered to multiple tenants at its 415 Mission Street location. The building will headquarter Salesforce, a leader in cloud-delivered software, leasing 714,000 square feet, over half of the building’s total space. 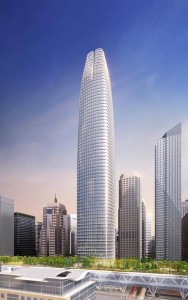 The software giant has committed $690 million for 15.5 years of leasing plus leasehold improvements. Already occupying several buildings in San Francisco, Salesforce will occupy over 2 million square feet in SF by 2018, passing Wells Fargo with the most office space in SF. Salesforce has 13,000 employees globally, with 4,000 in the Bay Area and plans to hire another 1,000.

Over 5,000 software companies are located from San Francisco through Silicon Valley to San Jose. Salesforce has an advantage in recruiting technology professionals, many of whom live in San Francisco and make long commutes to current Silicon Valley employers like Google, Facebook, Apple, Oracle, and SAP. Instead of commuting to their horizontal corporate campus in Silicon Valley, Salesforce will provided an opportunity to walk to their vertical corporate campus, with iconic views of the Golden Gate Bridge, the bay, the ocean, the vibrant city, and the adjoining 5.4 acre city park complete with a grove of redwoods.

Salesforce Tower is 95 percent owned by Boston Properties and designed by Peili Clarke Pelli Architects. It is a centerpiece in revitalizing a neglected area of south-of-Market San Francisco with the Transbay redevelopment plan for a mixed-use of office, residential and transportation. Over 200 feet higher than San Francisco’s Transamerica Pyramid, Salesforce Tower will briefly be the tallest building west of the Mississippi River until surpassed by a Los Angeles rival.

In Los Angeles, the Wilshire Grand will rise 1,100 feet at Wilshire and Figueroa to be the tallest building west of the Mississippi. Its 73-story height and massive glass entrance will inspire new building architecture in the downtown Los Angeles. Mixed-use, the building will include 400,000 square feet of office space, retail, and 900 hotel rooms operated by InterContinental. Wilshire Grand, owned by Korean Air, with a budget estimated at $1.75 billion will edge-out in height the nearby U.S. Bank Tower. 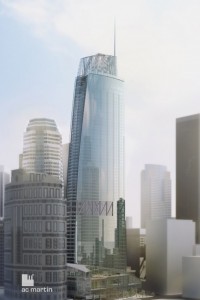 For Californians, like me, who have lived through a number of earthquakes, the heights are unsettling. To withstand a big one, the Wilshire Grand sits on a foundation of over 20,000 cubic yards of concrete (Guinness World Record) and 7 million pounds of steel.

Although the height of these West Coast buildings are fractions of One World Trade Center in New York and Willis Tower in Chicago, Salesforce and Wilshire Grand soar in innovations that make them great for working, commuting, and enjoying nearby amenities.

Both Towers give commuters easy alternatives to driving. The Wilshire Grand is at the 7th Street Metro Center Station, connecting the popular red, purple, and blue lines of the widely used Metro subway/rail system, as well as many bus lines. Metro connects at Union Station to Metrolink, Amtrak, and, in a decade, California High-Speed Rail.

The Salesforce Tower is adjacent to the new Transbay Transit Center, the West’s alternative to Grand Central Station in New York. This new terminal is designed to connect all of the SF Bay Area’s thirty-plus bus and shuttle systems to Caltrain, which in turn connects to California High Speed Rail (HSR). HSR may eventually come directly to Transbay. BART is a one-block walk, and someday a second BART tube may stop at Transbay. Freeways are nearby.

Twenty-years from now, with HSR you might be able to get from downtown San Francisco to downtown Los Angeles in three hours. In ten years, it will take four hours because of connections in San Jose and Burbank.

California has a goal of reducing its greenhouse gas (GHG) emissions by 80 percent by 2050 over 2005 levels, while increasing population over 20 million. Transportation is 43 percent of the state’s emissions; commercial space 25 percent, and residential 22 percent.

Both Salesforce Tower and the Wilshire Grand exemplify why California is achieving sustainable growth. Most employees will get to Salesforce Tower car-free with transit and even walking, saving time, money, and emissions.

Wilshire Grand will be a LEED Silver building. Visitors will be surprised at how easily they can walk to the Convention Center, the Staples Center, and the Disney Concert Hall. I have made those walks on many occasions, as well as being surprised by the ease of taking Metro light rail and buses to Hollywood, Santa Monica, Pasadena, and even the LA Airport.

Salesforce Tower is surrounded by new residential and mixed-use development. It reflects the explosion of technology work. Over one thousand tech companies have eschewed traditional Silicon Valley industrial parks in favor of being headquartered in San Francisco. These tech companies include Twitter, Yelp, Uber, AirBnB and DropBox. Google, Amazon, and Adobe also continue to secure more office space in San Francisco.

Wilshire Grand and Salesforce Tower are iconic of the soaring transformations of Los Angeles and San Francisco.