Joyce Coffee is an urban strategist and president of Climate Resilience Consulting, a Certified B Corp that works with clients to create practical strategies that enhance markets and communities through adaptation to climate change.

Even as we work tirelessly and in the face of great obstacles to reduce our greenhouse gas emissions, humans have already set in motion impacts from climate change — many of which we’re witnessing in real time: more frequent and intense storms, flooding, sea level rise, drought, and extreme weather events. This year’s tragic impact from Hurricane Florence, wildfires, and river floods adds to miseries like last year’s Harvey, Irma and Maria.  Thus, communities around the world are embracing climate adaptation measures and plans to be resilient to what the future will bring — and what the present is already delivering. 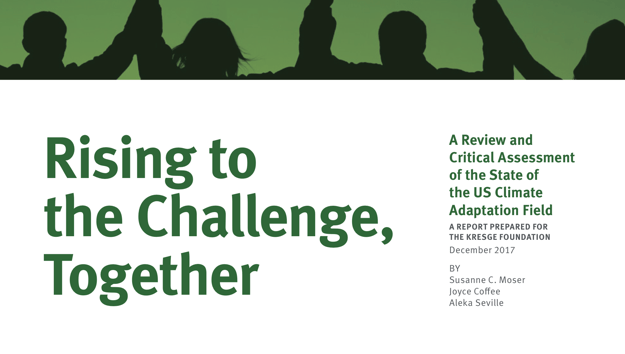 At the request of Kresge, a leading philanthropy focused on adaptation in the US, I joined with Dr. Susi Moser with Susanne Moser Research and Consulting and Aleka Seville at the time with Four Twenty Seven Inc. to conduct interviews and surveys with almost 100 leaders representing the public, private, and NGO/civic sectors and academia, covering a wide range of adaptation-related expertise and perspectives.

Climate adaptation has begun to emerge as a field of practice; however, it is not evolving quickly or deliberately enough for communities to adequately prepare for the dangerous shocks and stresses that increasingly will be introduced by climate change.

Our team identified a number of challenges:

There are plenty of positive signs. The field has a growing purpose as climate impacts are driving adaptation. New actors and networks have energized the adaptation field, including city networks, community groups, utilities, and the private sector.  And in particular, the practice of adaptation is gaining ground – here are 5 key marks of progress:

The report lays out a clear vision for the adaptation field’s future: Closing the resilience gap through significantly accelerated mitigation and adaptation efforts while building social cohesion and equity.

What is the resilience gap? It’s the gulf between adequate levels of mitigation and adaptation that is especially profound where social cohesion and equity are lacking.

The vision of narrowing this gap inspires the maturing adaptation field to prevent, minimize, and alleviate climate change threats to human well-being and to the natural and built systems on which humans depend. It’s exciting to fulfill this mission, because by doing so we create new opportunities -addressing the causes and consequences of climate change in ways that solve related social, environmental, and economic problems. (Moser et al 2017, Rising to the Challenge, Together, pp 9).

The report points out that the most efficient and effective way to get a move on adaptation is to “mainstream it, integrating it into existing government and policy structures. Adaptation barriers and capacity needs that can be addressed through mainstreaming include:

Even in the year since completing the report, we’ve seen profound growth in the adaptation field. For instance, the Task Force on Climate Related Financial Disclosures guidelines released in mid 2017 have created a new interest among investors to know their physical risks. Similarly, several of the major credit agencies are examining these risks when evaluating municipal bonds, growing the pool of interested city practitioners.  The Global Climate Action Summit and affiliated events like Meeting of the Mind’s Climate Resilient Communities session in partnership with UC Davis defined a refreshed global ambition for resilience. And, while the Federal government has made it harder to find some of the data to help the average professional incorporate an understanding of risk and adaptation into their everyday work, others in the non profit and private sector have made their tools more available, more refined, and more related to very specific geographies.

These are just a few of the significant advances the field is experiencing, and, along with the momentum from the 100 experts we interviewed for the report, they make me quite hopeful for our future.