For the past 15 years, Christina Olsen has provided research, advisory services, project management, planning, and general management to a wide range of sustainability organizations and projects around the world. She holds a master’s degree in Sustainability and Environmental Management from Harvard and a BA in Environmental Studies – with a joint major in Anthropology – from the University of Victoria.

Learn More
This interview series is made possible by the Volvo Research and Educational Foundations. Each month we feature a leading thinker from VREF’s Future Urban Transport program.

Meeting of the Minds talked with Winnie Mitullah about her work on public and non-motorized transport in Africa. Dr. Mitullah is an Associate Professor of Development Studies at the Institute for Development Studies (IDS) of the University of Nairobi. In addition to sitting on the FIT Board, she is a member of the UN-HABITAT Advisory Board of the Global Research Network on Human Settlements. 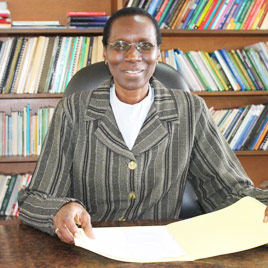 Can you tell me about the work you are doing?

We started our relationship with VREF on African studies on public and non-motorized transport in 2007. This research has had many elements, including: governance, road safety, paratransit, non-motorized transport, and infrastructure. My main work has been on non-motorized transport but I was also working with my colleagues on paratransit, which refers to informal and largely unregulated transit services. I also recently contributed to the book “Paratransit in African Cities: Operations, Regulation and Reform” in which I co-authored a chapter with a colleague from the Center for Urban Development at Columbia University, which is another VREF Centre of Excellence. Besides VREF, we also network with a number of other organizations that focus on public transport or non-motorized transport, such as United Nations Environment Programme (UNEP) and the United Nations Human Settlements Programme (UN-HABITAT).

Could you briefly explain non-motorized transport?

What are some of the other main challenges related to non-motorized transport in Africa?

If you look at the history, non-motorized transport seems to have been driven by regional bodies and international agencies. There are isolated cases where a development partner is supporting one or two aspects of it. The World Bank has done a lot in terms of pushing for non-motorized transport to be embedded into broader transportation systems. Even the African Union recognizes its importance.

However, there is limited understanding of non-motorized transport by policymakers, engineers, and planners because of the way it is taught in schools and universities. So they are not able to plan for it effectively. There is also a need for champions of non-motorized transport to challenge the motorized perspective and market new ideas to policymakers, parliament, and local government.

Compliance of regulations, such as of the number of seats required in paratransit vehicles or speed travelled, is a problem. Even where facilities for non-motorized users are provided, we see that people are not following the rules and regulations. Sometimes motorists will not even stop at pedestrian crossings and a number of people have been killed. The issue of compliance is quite critical in ensuring the safety of both pedestrians and motorists.

There are not many studies of compliance but we did one that was actually triggered by our Minister of Transport and Infrastructure. Conventional knowledge has been that paratransit, or what we call “matatu” here in Kenya, are not compliant with rules and regulations. The emphasis of related policy was generally only targeting paratransit, with the assumption that such an approach would resolve the issue for transportation overall. Our study told us that many other transport users are also not complying with regulations, including government vehicles. The only ones that approximated compliance were vehicles for schools and other education institutions.

Governance sounds like a key problem. How easy is it to manage?

Many African countries are struggling with harmonizing the many institutions that deal with transport. In Kenya, a number of agencies that were spread across different municipalities are now under one umbrella – the National Transport and Safety Authority. The gelling of relevant institutions creates an institutional framework that makes things easier, not only for the transportation users and stakeholders, but also in terms of governance and monitoring of public and non-motorized transport.

Nairobi is struggling with congestion but there are many parameters that lead to the condition of the city, such as urban planning, how activities are organized, and the integration of residential areas. Cities in Africa, and particularly in Kenya, have not done very well in terms of clarifying urban planning and growth strategies. Even once it is agreed – such as through a master plan or special plan – there is a question of how to ensure that plan gets implemented while avoiding interference from externalities that can undermine or negate it. At the end of the day, we are seeing urban growth in places where growth wasn’t planned, which means industries sprout up that are not licensed. So then you end up with a challenging situation for planning where you cannot effectively manage transport.

Have you seen any approaches that integrate the legal (formal) developments with the ad hoc (informal) ones in urban areas that weren’t officially planned by the city?

Not much has been done in integrating formal and informal. Generally, what local governments in Africa concentrate on is trying to provide some policy and formality for basic needs like water or roads. Local developments of informal settlements provide cheap housing but it is not decent housing. However, one positive thing about informal settlements is that they are responsive to local needs, especially providing labor. For instance, they might be located close to a highway or an industrial area so workers can easily walk nearby to look for casual employment. Informality tends to run ahead of formality, so as formal planning goes on, informality also grows. You can’t just transform informality into formality, so a gap still exists. The issue of informality is actually quite interesting and there is endless debate on it.

Where do you see the biggest opportunities for non-motorized transport?

I see a lot of opportunity with policymakers in terms of how they do planning. In Africa, there are not many transport researchers or engineers that specialize in non-motorized transport – or even just urban transport – so we need that in training programs. Research is critical and we need more engineers who do research.

Walking and cycling are generally seen as a mode for the poor. Recently people are beginning to know that walking and biking is healthy so we’re starting to reorient the public to realize that it is good for their health. This really is a story aimed at planners, engineers, and practitioners and an opportunity lies in education and supporting groups to champion walking and cycling. This is something that needs to be jointly developed by partners collectively, including the private sector, civil society, and other actors, like those who advocate protecting consumers. But they need knowledge from the knowledge institutions and research think tanks, which then has to be processed in a way that the public can easily consume.

What other changes related to your work do you see coming in the next five years?

A major change is city authorities going farther to address issues such as non-motorized transport. For instance, there is now a condition that you cannot build or retrofit a road without embedding non-motorized transport aspects. I foresee a situation where cities begin to be friendlier to walking and cycling. People still have a negative idea regarding cycling in cities because of unsafe and often disconnected infrastructure. So it might be possible to cycle for maybe a kilometer or two and then you then have to stream into the motorized transport. However, walking is improving, particularly as people equate it with improving urban health. For instance, in Nairobi, there are nice walking path facilities with benches and trees.

I think the biggest disaster in Africa is unscheduled transport. We all take our cars because we can’t be sure about the unreliable public transport, especially during rainy season. However, South Africa has been doing some Bus Rapid Transit (BRT) and Kenya is talking about light rail. We ran a regional meeting to share knowledge and collaborate across neighboring countries on handling motorized and non-motorized transport in our urban areas. However, there is still a lot to be done in terms of creating holistic picture and building awareness.