In my previous article, I detailed the adoption of energy efficiency and solar in our nation’s 125,000 schools. Now, intelligent storage systems are bringing further savings and increasing the value of solar. In the past, most clean energy efforts were killed by lack of budget for capital expenditure (capex). Now, public-private partnerships use innovative agreements freeing schools from capex, lowering their energy costs, and rewarding private partners.

At the GTM US Energy Storage Summit, Shayle Kann forecasted that US energy storage would grow from 700MW storage in 2017 to 17.4GW in 2027, driven by falling storage costs, enlightened state and utility policy, and the intelligence provided by big data and machine learning.

Add storage with solar, and a school has many ways to make or save money. Let’s follow the sun through the day to see how. Many schools have peak energy use in the morning. Classrooms and offices are heated or cooled after being empty all night. Computers and equipment are turned on. Everyone arrives. Batteries are used during these peak hours, having been fully charged in the middle of the night, which takes advantage of deep off-peak time-of-use (TOU) rates.

In the middle of the day, maximum sun power is captured. When I visited U.C. Davis, a massive 16 MW ground-mounted solar array captured sun power on unused land. A single axis system increased captured energy, by tilting the solar panels to face the sun crossing the sky. With large-scale batteries, excess solar power can be stored.

By late afternoon, energy demand declines at most schools enabling batteries to be fully charged. In many utility areas, peak energy demand is currently set by the utilities to fall between 5:00 to 9:00 in the evening. Schools in many states can sell power to utilities and wholesale markets during these hours at premium rates, or at least participate in demand response programs where energy use is curtailed to zero thanks to intelligent energy storage.

Rutland High School in Vermont uses 2 MW of solar panels with 3.4 MWh of battery storage. During normal conditions, the solar + storage system provides utility peak power generation for the developer, Green Mountain Power. During an emergency power outage, the system can be used to power the critical loads in the high school and serve as a community emergency shelter.

Mountain View-Los Altos High School District (MVLA) first invested in efficient lighting and other energy efficiency measures. In 2011, it installed 1.26 MW of ground-mounted solar to meet half its energy needs. Located in the heart of Silicon Valley, MVLA parents work at places like Tesla, Alphabet, and Oracle; it’s no surprise that the district would not only use advanced batteries with its solar, but would also use intelligent storage management with big data and machine learning. 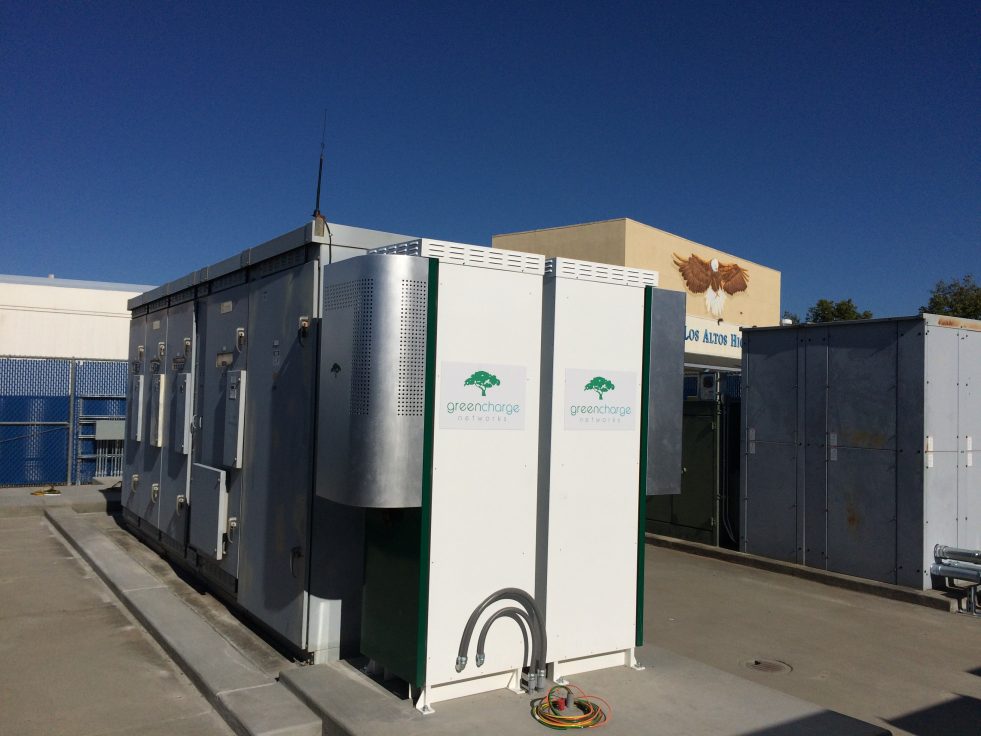 GreenCharge, an Engie Company, installed 1.08 MWh of lithium batteries and cloud hosted big data and machine learning for a monthly fee that is less than the energy cost saved in avoided peak demand charges. Upfront costs were avoided with a 10-year Power Efficiency Agreement (PEA) where batteries are installed and managed at zero cost to the school. These agreements can be considered a form of public-private partnership where the public school avoids the capital investment and the private firm shares in the savings.

In San Diego County, California, Santana High School was the first of 14 schools in the Grossmont Union High School District to use GreenCharge GridSynergy Storage. Two 250 kW/500 kWh Samsung lithium battery systems were installed on campus. The Grossmont district is installing 7.4 MWh of storage. The school hopes to save $6.4 million over ten years.

Nearby Poway Unified School District, with 41 schools, is installing 6.3 MWh of storage in a PEA 10-year agreement with GreenCharge. My niece and nephew are graduates of their excellent schools. The district was open to new solutions after saving $250,000 annually from new LED lighting and HVAC controls and then using PPAs to install 715 kW of solar on modular classrooms at 16 campuses. 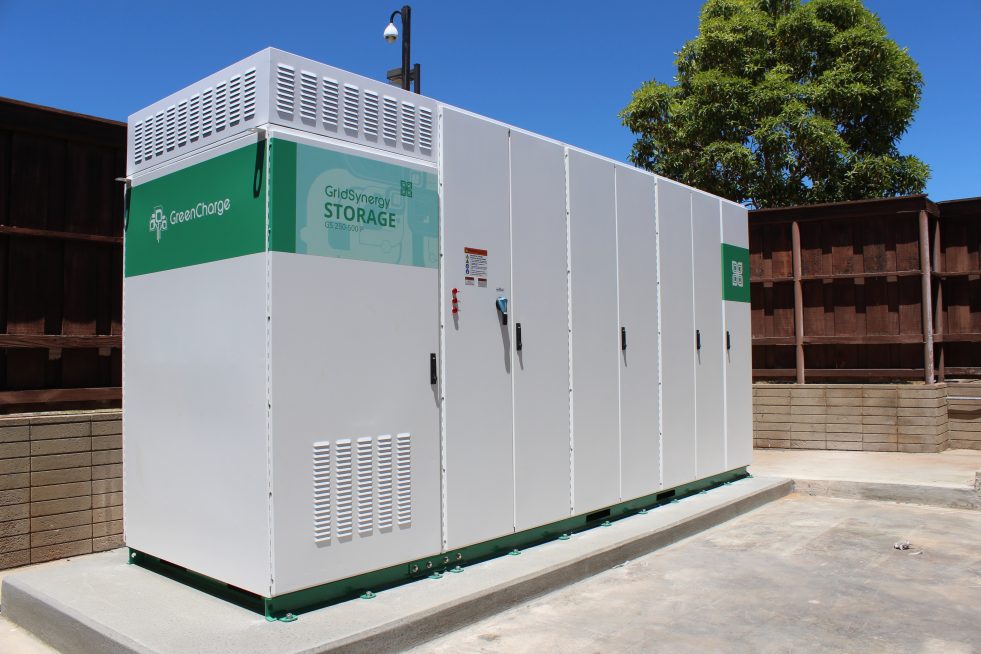 For utility San Diego Gas and Electric, the energy storage at these two districts represent 13.7 MW that could be dispatched at peak hours as a virtual power plant. Major utilities in California are starting to reduce their use of natural gas (methane) peaker plants as the utilities turn to storage and energy aggregators such as GreenCharge, Stem, and Advanced Microgrids. See my article discussing Southern California Edison’s approach to solar, wind, and storage as they reduce dependency on methane and natural gas plants.

GreenCharge collects second-by-second energy use data from all customers. It subscribes to weather and solar forecasting data. With years of data and  machine learning, GreenCharge software gets continually smarter about forecasting energy use at a site and predicting solar generation. The software continually improves in selecting the ideal times to charge and discharge the battery. Utility peak demand charges are avoided. Typically batteries are fully charged off-peak when utility rates are lowest and discharged when the school district faces peak demand during school hours.

Solar + storage can save schools money in several ways according to GreenCharge: (1) energy arbitrage with the system storing excess solar energy, then discharging it when rates are higher; (2) solar firming by sensing intermittent disruptions in solar output such as passing clouds, the battery discharges power to keep supply at a consistent level, thereby avoiding peak demand charges; (3) tariff optimization as the system supplements solar energy generation with stored power, so that grid usage stays below a higher tariff threshold.

By combining intelligent storage, solar, and energy efficiency, schools may eventually save billions of dollars that can be put towards better classrooms, more teachers and aids, and better learning. Intelligent storage is helping schools with peak shaving, rate optimization, arbitrage, and demand response.