Connected and automated vehicles will save millions of lives in the next 30 years as they roll onto streets and highways, having an effect on cities as big as the arrival of the automobile itself.

We are on the cusp of a transformation in transportation, driven by advances in automotive connectivity and automation. At the heart of this transformation is highway safety. Each year, more than 32,000 people die on American highways – more than 1 million people every 30 years.

High fatality rates are not exclusive to the United States. Highway safety is a global problem. In 2010, 1.24 million people died on highways worldwide. Using the same multiplier, in the next 30 years, 37 million people will die from car crashes – the equivalent of Canada’s population.

We have the technical capability and, thus, a moral obligation, to reverse this morbid trend and save these lives. Vehicle connectivity and vehicle automation together will dramatically impact transportation safety in the future and reshape American cities.

In less than 20 years, the time it will take for complete fleet turnover, connected vehicles and automated vehicles could reduce to zero the number of husbands, wives, daughters, sons, mothers and fathers killed on our roads. Yes, zero. Imagine: Someday, people will talk about highway fatalities the way we talk about polio today.

In congested highway traffic, you may not see a driver braking hard 10 car lengths ahead of you. But your connected car, communicating wirelessly with the vehicles around it, will sense it and will alert you – ultimately assisting you in stopping your vehicle before the collision happens.

That is vehicle connectivity in action. And, it’s estimated to affect more than 80 percent of all crashes involving unimpaired drivers.

Vehicle connectivity is a set of technologies intended to improve safety, mobility, reduce carbon emissions and improve the travel experience in general. Vehicles equipped with this technology communicate with each other 10 times per second, a speed necessary for conflict avoidance. 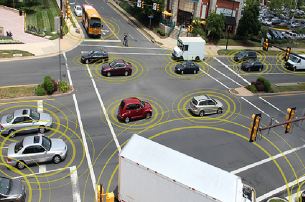 Communications between vehicles and the infrastructure is achieved through dedicated short-range communications, a frequency set aside by the Federal Communications Commission for vehicle-to-vehicle and vehicle-to-infrastructure applications. Because it’s dedicated, the messages sent over this frequency are lightning fast and secure. The technology comes with a security credential management system that creates a trusted environment in which vehicles can communicate.

We are on the brink of moving this technology forward. In fact, U.S. Secretary of Transportation Anthony Foxx recently said he would like to accelerate the regulatory process, so automakers could bring this technology to the consumer sooner.

General Motors is positioned to be among the first to offer it. GM announced at the 2014 ITS World Congress in Detroit that it will be equipping 2017 Cadillac CTS models with connected vehicle technology. The vehicles will be available late next year.

Vehicle automation is nothing new. Automatic transmission, ABS brakes, traction control, airbags – all of these safety features involve some level of automation within the vehicle.

The world’s automakers now are introducing advanced sensor systems that involve video, radar and LiDAR, a laser-based technology that continually and accurately scans and maps the environment around the vehicle. If you’ve seen the prototype of a Google car, the device that sits on top is a LiDAR device.

If one word could sum up the joint mission of connected vehicles and automated vehicles, it would be prevention – total, 100-percent elimination of all vehicle crashes. Whereas seatbelts and airbags protect occupants in the event of a crash, new vehicle automation technologies will prevent the crash from happening in the first place.

In fact, the goal of automakers is to build a car that doesn’t crash. How? Automation will reduce and, ultimately, eliminate human error in driving. With human errors accounting for nearly 90 percent of all highway crashes, you can appreciate automation’s effect on safety.

When you combine sophisticated connected vehicle and automated vehicle technology, you eventually get driverless cars. Google’s new prototype, being built in Detroit, has no steering wheel or foot pedals. You program your destination, and the car takes you there. That’s the dream of many auto companies. They are all moving toward completely autonomous vehicles.

This past September, I had the opportunity to ride in a driverless vehicle going 70 mph down one of Detroit’s busiest freeways – hands free! Traffic was all around us, but we were safely following the car in front of us and staying directly within the lane lines.

This is a great example of Level 2 automation – where more than one feature, in this case, lane-keeping and adaptive cruise control – work in concert to allow hands-off driving and greater safety.

Connected and automated vehicles are game-changers for traffic safety – one that the U.S. government and the U.S. auto industry have embraced. It’s one cities should embrace, too.

If cars don’t crash, vehicles can drive in platoons at high rates of speed and with less space between them. That means every lane of traffic in a congested city could carry three times its current capacity!

And, if cars don’t crash, cities can reduce lane widths from 12 feet to 9 feet. Now, we can fit four lanes of traffic into today’s three-lane footprint – increasing the capacity of a highway by 400 percent – without purchasing an inch of new right of way! Not only that, but the clear zone or shoulder along the sides of the highway can be put to more productive use for non-motorized, pedestrian or economic purposes.

As we move into a shared economy, automation promises greater opportunity for vehicle sharing. Before you know it, cars, trucks and buses will operate 24/7/365; cities won’t need as much space for parking. As a result, we can reshape our cities, making them safer and more livable.

When you combine vehicle connectively and automation in transportation, you get incredible change – undoubtedly the biggest change to American cities since the advent of the automobile itself.

Evolving connected and autonomous vehicles will make travel on our cities’ streets and nation’s corridors and in our vehicles more reliable, predictable, faster and safer. Think about the positive effect on cities: greater job accessibility; the newfound freedom for the transportation disadvantaged, such as blind or handicapped people; the efficient movement of goods; recreational opportunities; and educational options.

The full benefits of this transformation won’t be realized overnight. But cities can start now to incrementally create a safer world for future generations of travelers, including our children, our grandkids and their grandkids.