Iemke Idsingh is Public Sector Solutions Director for Smart Cities at Oracle. He carries the worldwide responsibility to create awareness for the Oracle Smart City Platform solution, helping cities to create a Citywide Nervous System and to establish a Sentient Infrastructure that connects Cities with its Citizens in a sustainable way.

Society today is modeled after the same principles established centuries ago. The scale of our activities is certainly different but the underlying mechanisms are similar. Instruments have changed and the impact of human behavior is larger. The context that people can relate to follow the basic rules that society has always been based upon. Whether we live in an open economy or a top-down society,– there is a common notion that we now refer to as ‘Quality of Life’.

It is also true that most societies granted the right to safeguard this ‘greater cause of quality of life’ to a higher level, in whatever political form or power structure. They became the cities, councils, counties, municipalities, districts – the local governments as we know them today.

What dramatically changed is the connection between those that we ‘delegated’ the power to and the constituents that allowed for this shift in power. The gap between those who govern and those that represent society is larger now than ever before. Cities became bureaucracies to serve themselves rather than take care of their citizens.

By giving away responsibilities, constituents seem to have lost control.

But the pendulum always swings back. Connected urban society finds ways to narrow the gap that impacts so many of our day to day activities – running a business, traveling from A to B, attending school, and finding a secure place to live. The urge to return to the human dimension and to a scale at which people feel in control, appreciated and recognized is on top of the urban agenda. Proof of this is all around us — from roof gardening to peer-to-peer car sharing, to the rise of entrepreneurship in closed societies, and the increasing acceptance for social responsibility. 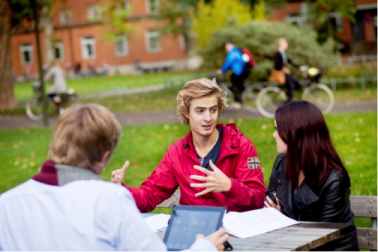 Modeling the participation of citizen engagement has been the focus of many studies around the world. One comes to mind that continues to be relevant even twenty years since its publication date. It assumes the continuous interest of residents to take ownership and act responsibly and models it against the facilitating role local governments are expected to play. It concedes that:

This structure shows a continuous cross fertilization in which consultation facilitates the expression of opinions and a collaborative approach allows citizens to take part in civic society. Keywords here include trust, openness, transparency, facilitation, and sharing responsibilities. These are elements that are lacking in many societies yet so important to the overall citizen experience. It is about the connections that are reestablished, about closing the gap, and allowing ‘the crowd’ to play the role they originally owned.

Technology can serve as a facilitator. Connected city infrastructures allow cities to engage citizens and enable them to participate in the role they demand and deserve. City management can recalibrate return to a facilitating role. The dynamics of the public can be left in the ‘safe’ hands of the citizens themselves. After all, it’s impossible to organize and structure all the elements that determine quality of life. It’s the deviation from rigid structures that is the recipe for change and the basis for progress and innovation. Local governments that empower its constituents to take ownership of their own progress reap the benefits of a flourishing, incubating, innovative and job-creating society. The separation of central responsibilities from the dynamics of society is key. Connectivity, technology, communication serve as the instruments towards this end.

Engagement around the globe

The common factor in initiatives like these is the willingness of local authorities to focus on their core responsibilities, while opening opportunities for citizens and businesses to build upon a shared infrastructure. There is much more potential for room for government administrations to create the foundations upon which citizens can innovate and creatively engage. It’s all about giving back responsibility to the citizens.

The finishing touch is about closing the loops. Feed what you learn from M2M communication back to business, ensure governments take citizen perspectives into account in their decision-making, reach out to citizens proactively by analyzing IoT data, and use citizen feedback to target inspections. We may refer to M2M, H2H, B2G, G2G etcetera – but it’s the combined and creative use of information, the openness of data, and the cross fertilization that empowers all stakeholders.

Sustainability in people’s lives is measured against the human experience – the day to day experience of citizens. Maintaining a healthy balance between applying technology and having an eye for the human factor is key. It’s where technology can facilitate and the dynamics of society begin to flourish. A great deal of positive realism and relativism is welcome and it lies in the joint responsibility of public administrations and constituents alike.