How Micro-Securitizations Can Bridge the Clean Tech Funding Gap

We’ve lived in a fairy tale world of easy energy all our lives.

Our utilities and regulators have worked hard to provide us with nearly unlimited energy at stable, low prices. They’ve shielded us from volatile fuel prices, protected us from the dramatic swings of wildcatting for oil and gas, and softened the escalating cost of building new generators. No wonder the average American spends just eight minutes a year thinking about energy!

But this fairy tale world is coming to an end.

In their efforts to protect consumers from higher capital costs, utilities have racked up more and more debt and weakened their credit. Storms, wildfires, record heat waves, and cold fronts are pushing our electricity grids to the limit. The general public is demanding a wholesale shift to zero carbon energy to stop climate change. Meanwhile, new technologies are starting to erode the utilities’ traditional monopolies.

Experts tell us that we’re headed to a world of distributed energy: solar, wind, storage batteries, smart energy management systems installed “behind the meter” at homes and buildings. When we go out there to make this happen, though, we often run into the Problem of Bob and Bob.

Two problems arise because business and residential customers are still living in that fairy tale world of cheap, easy energy.

First, they’re not used to thinking about energy. Energy was something they always took for granted, and energy must continue to be easy for them. For new energy technologies to gain mass adoption, they must protect their customers from risks just like utilities and regulators do, even if the new risks are how often the sun will shine or the wind will blow.

Second, somebody else has to pay for it. It’s not going to be the consumer. They’re used to getting as much energy as they need without ever investing in energy production. It probably won’t be the utilities either: not only has their creditworthiness weakened over the years, but the sheer amount of capital required dwarfs the size of the utilities industry. 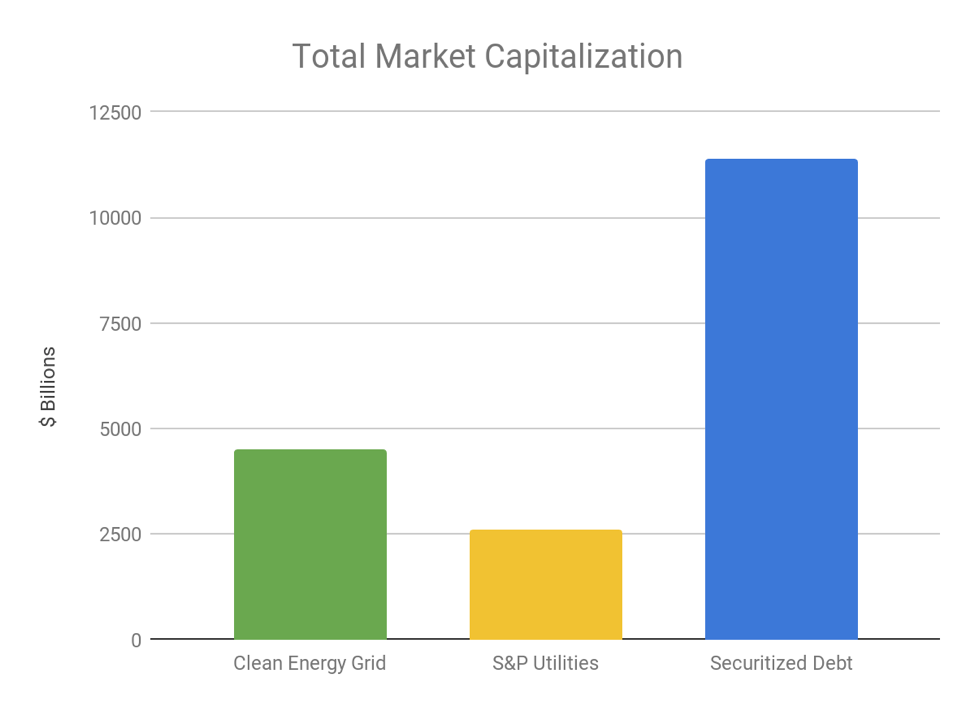 Fortunately, there is a tool that has been able to help reduce risks while providing capital at scale: securitization. Around since the 1970’s, securitization raises capital at scale by aggregating large numbers of similar assets together and creating liquidity for potential investors. At the same time, it can shield most of those investors from risks they don’t understand by splitting the cash flows of the assets into multiple tiers of securities.

This combination has opened up previously illiquid and poorly understood assets to a broad universe of investors. Those investors have, in turn, rewarded borrowers with lower rates, flexible terms, and access to virtually unlimited capital. From its beginnings with residential mortgages, securitization has now become the preferred way to raise capital for most consumer loans, mortgages, and commercial mortgages, and it’s even used to fund cell phone receivables, timeshares, and RV’s.

The challenge for securitizing clean energy assets is that most of the technologies are new, so there is a lack of data to help investors understand the potential risks. This then creates a chicken and egg problem: until we bring enough assets together, investors would not be incentivized to learn about their risk and return profiles. But until we have access to capital, new and innovative clean energy technologies would not scale to sufficient volumes needed for investors to learn them.

New technologies based on the blockchain could solve this problem. Blockchain’s combination of smart contracts and tokens could allow us to perform all the tasks of securitization, but at smaller scales — think mini, micro, and nano-securitizations. We could go down as far as each individual installation for solar, wind, storage, energy efficiency, or grid services and split up the risks. Then we could aggregate the senior or enhanced classes from all these different assets, with their specific technology and project risks removed, back up into one master structure and fund it in the securitized debt markets to get the best rates.

Here’s how securization of renewable energy assets could work: 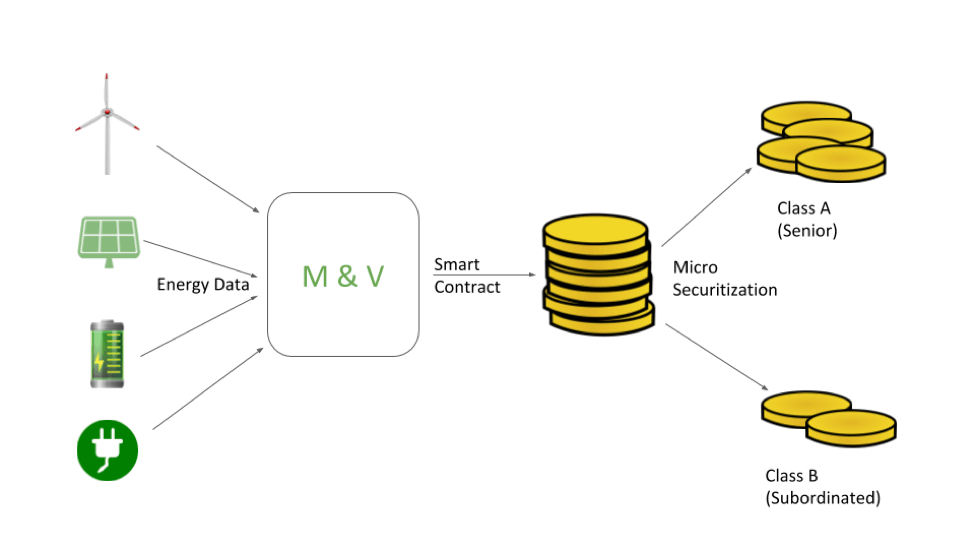 The result is to remove energy risk and provide capital for consumers, so they could continue to enjoy low-cost, risk-free access to energy. At the same time, we could aggregate projects from different energy technologies, locations, and customers together in a pool large enough for securitization. As long as the sizing of the subordinated class B tokens are large enough, these investors are effectively shielded from technology, site, or project specific risks.

From a macro level, such a financing structure provides capital at scale for clean tech companies to offer energy as a service, just like the utilities have done. Their micro utilities could overcome Bob and Bob’s objections, and deliver efficient clean energy, thanks to a combination of new energy technologies, the blockchain, and micro-securitization. The future of distributed energy would then finally be within sight.