Melissa Guardaro is an Assistant Research Professor in the School of Sustainability at Arizona State University. Her research focuses on adaptation, equity, vulnerability, urban policy, and governance for the mitigation and adaptation to extreme heat and urban heat island effects. She is currently working with The Nature Conservancy, the Maricopa County Public Health Department, and community-based organizations to create neighborhood heat solutions that improve thermal comfort and public health outcomes.

Masavi Perea is the Coalitions and Training Director at Chispa Arizona. Masavi Joined the League of Conservation Voters, Chispa, AZ in July of 2016. He is originally from Chihuahua Mexico. He believes that community grassroots organizing is the most effective way to empower and positively impact our families, neighborhoods, communities, and our Mother Earth. Masavi’s goals are to bring urgency to Environmental Justices issues that affect the Latinx community, and create alliances with groups and communities that are not normally part of the decisions making process.

Urban heat is a growing problem that impacts public health and the economy. In metropolitan Phoenix, the number of days above 110 degrees are projected to double by 2060. Extreme heat presents a resilience challenge in managing urban development, especially when temperatures can differ by more than 10°F between neighborhoods under certain conditions. As a result, not all populations are affected equally by the impacts of urban heat. Vulnerable populations have been identified as the elderly, children, those living in areas with little vegetation or shading, those with pre-existing health conditions, and ethnic minorities. The choices cities make about urban development, materials, and green infrastructure can make a big difference in thermal comfort ( how a population experiences heat). At the community level, there is a sense that extreme heat is too large a problem for neighborhoods to tackle, and a general resignation among residents that this is “just the way it is.”

“With conversations with neighbors, what is very interesting to me is that they say, “oh, it’s hot, that’s normal.” And I think that’s the interesting part of the conversation. It is hot, but it’s not normal. There is something that we can do.” – Community Partner

Community-based organizations (CBO)  in each of the three communities were brought into the project to facilitate community engagement and to provide insight into unique community identities, needs, and histories. The CBOs were a critical component in developing the heat action plans as they were responsible for recruiting workshop participants, selecting demonstration projects, and bringing in other CBOs, city decision makers, and community leaders.

A series of three workshops in each community were held in the summer of 2018. The first workshop detailed cool and hot spots within neighborhoods, highlighted assets, and provided an opportunity for the core team, CBOs, and residents to share their stories about urban heat. Storytelling was used throughout the workshops by residents, subject matter experts, decision-makers, and scientists. Using stories allowed for building trust quickly, and this facilitated an understanding of the underlying science behind the drivers and solutions for extreme heat. The local wisdom of residents in coping with heat provided insight for the core team and other participants.

“What makes this project unique is that we’re focused on improving quality of life, we’re not just recording facts about heat and shade, etc. You need people’s experiences to drive the process of change.” – Core Team Partner

The second workshop focused on providing possible strategies to address the urban heat related concerns identified in the first workshop. These ideas were refined in the third workshop. Four overarching themes emerged across all three neighborhoods:

The central Phoenix neighborhood of Edison-Eastlake is the recipient of a $30M Housing and Urban Development Choice Neighborhood Grant to redevelop the largest concentration of public housing within the City of Phoenix. The Phoenix Revitalization Corporation (PRC), which was selected as the community-based organization for the Nature’s Cooling Systems project, developed a Resident Leadership Council to ensure that the ongoing redevelopment project has resident input. The Edison Eastlake NCS Heat Action Plan stressed shade in any form (trees, constructed, shade from built environment) along public transit routes, with drinking water available at half mile intervals, and prioritized the elderly and those with disabilities for cooling interventions. They requested assistance with the high cost of electricity for indoor cooling. Residents were interested in learning how to better handle heat emergency situations, and requested a preventative warning system and a first aid certification program specifically tailored to urban living heat exposure issues. 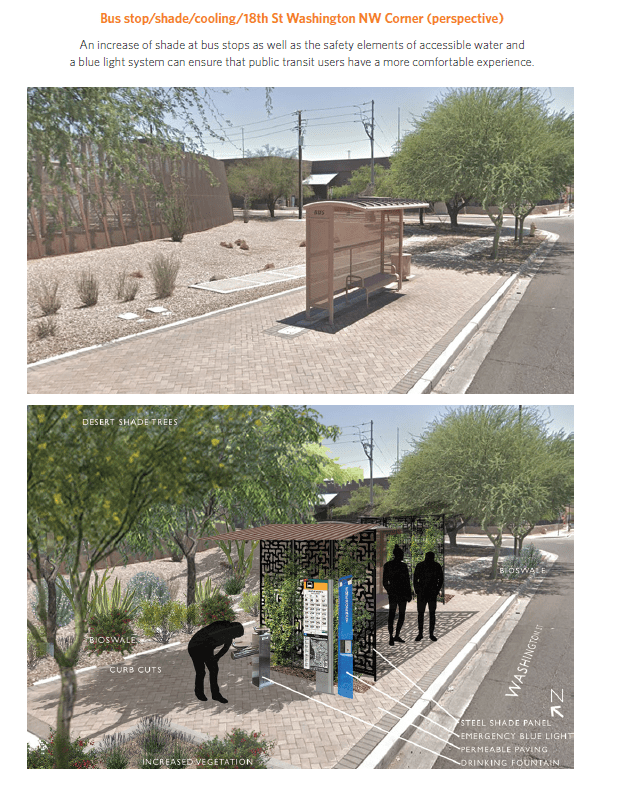 The Mesa Care neighborhood, also known as the Water Tower Improvement District, is located in West Mesa, Arizona, which is part of the Broadway Corridor redesign project currently underway on a major traffic corridor and community center. The CBO for this community, RAILMesa, consists of residents, artists, and local business owners leading a grassroots effort to build and advocate for a stronger, better, connected light rail corridor in Mesa. This neighborhood emphasized the need to keep children safe in the hot weather, and requested heat safety educational programs, shade along access routes to schools, and water features such as splash pads or sprinklers to cool off. The water features could also benefit vegetation with runoff, reducing tree maintenance costs. 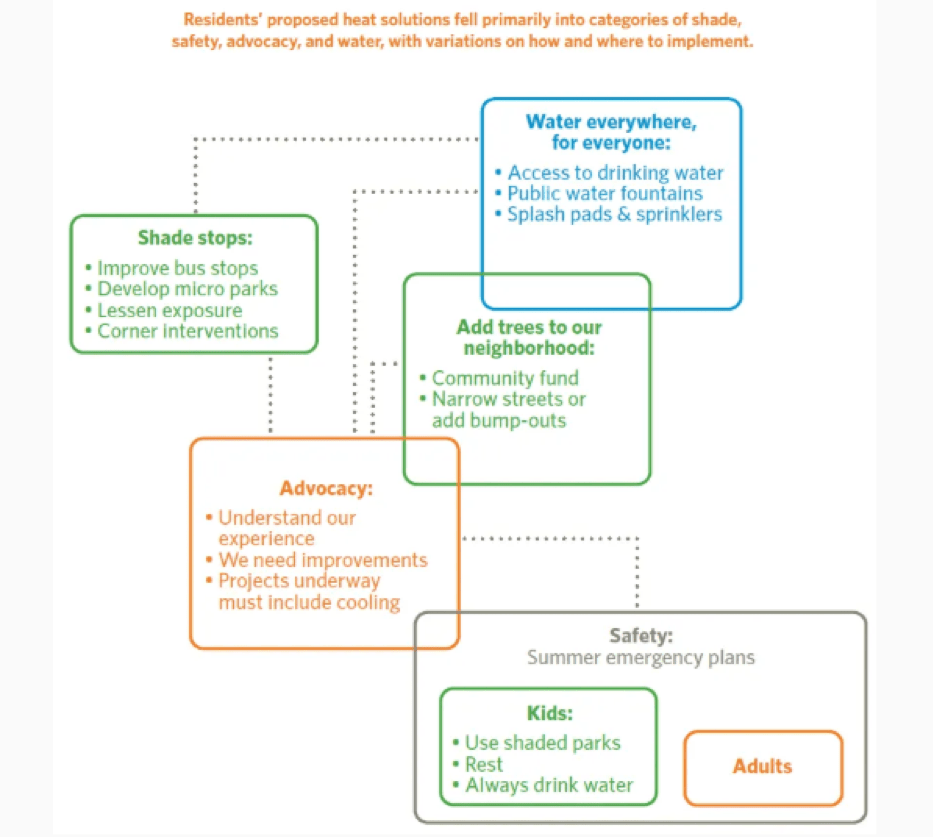 Mesa Care residents were also concerned about their elderly residents, especially those living alone, due to their limited income and decreased mobility. Residents felt that these older community members, especially those that have lived in the neighborhood for twenty years or longer, could provide wisdom in how to cope with heat and wanted to ensure they were cared for during extreme heat days. An emergency summer plan, targeted to both children and adults, would build awareness of cool spots and official cooling centers, eliminate needless wait times at bus stops, and highlight access to drinking water. Reusable water bottles could be distributed at school with safety information on the side, so teachers would not allow any child to leave school without a full bottle of water. The safety information could be the basis for an advocacy program as well. Here is the full Mesa Care NCS Heat Action Plan.

This South Phoenix community, Lindo-Roesley Park, has a rich Latino and farming cultural identity that is being threatened by gentrification with an extension of the light rail close to the neighborhood. Puente Movement, a grassroots organization that is a leader on social justice issues, led the heat action planning in this neighborhood. Residents would like to provide more shade throughout the community by planting more trees but face barriers to maintaining them properly such as limited funds and living in rental property. They would like to see a community tree fund developed that helps maintain large mature shade trees, assists with the financial burden of removing dead trees and the purchase of replacement trees. Landowners could agree to install a “rest stop” on their property to allow neighbors to cool down and stay safe in extreme heat. A stormwater capture system could irrigate these spaces and alleviate flooding which is a common occurrence. Residents requested approaching shade, water, and access to the bus route as a system that would allow for greater thermal comfort and safety. Click here for the full Lindo Roesley Park NCS Heat Action Plan. 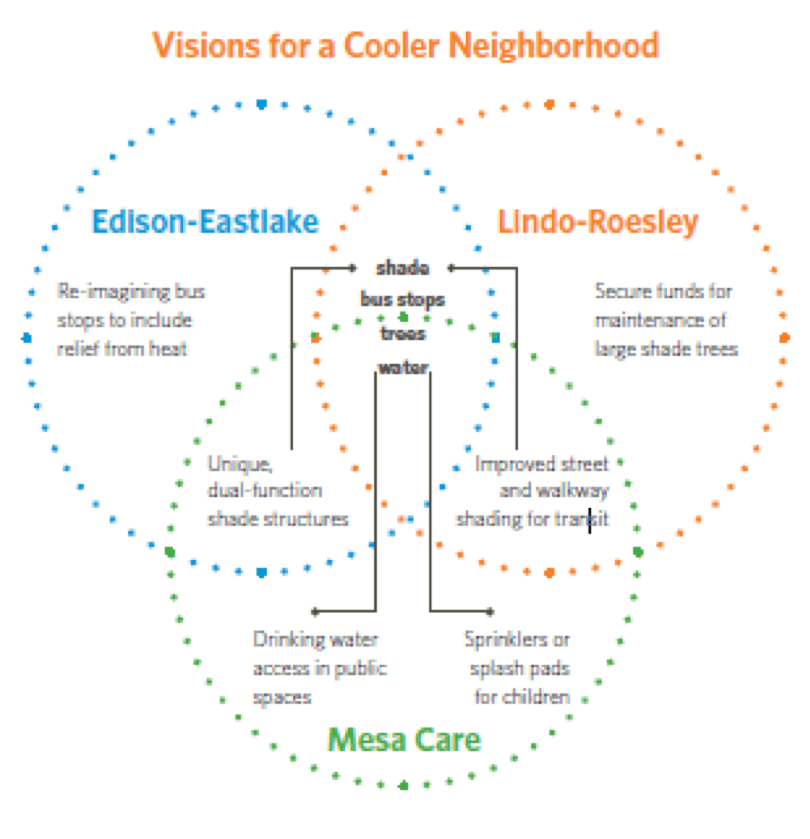 The Nature’s Cooling Systems project addressed inequalities and developed a plan to provide greater thermal comfort and improve public health outcomes and can serve as a model for other municipalities that wish to address urban heat at the hyper-local scale. The resident-inspired strategies for creating a cooler community were guided by evidence-based research, design principles, context-specific assets, and local adaptation behaviors. The community-based organizations, armed with scientific knowledge, the vocabulary of urban heat decision makers, and empowered residents are the leading advocates for heat action plan implementation.