There is a growing buzz around strengthening urban food systems. Consumers want more transparency in where their food is coming from and how it is being made. They are voting with their dollars by purchasing from local producers. A University of Kentucky study shows that Community Supported Agriculture (CSAs) grew 50% between 2007 and 2009. Similarly, cities are looking to solve issues of food deserts and inequitable access to food, with San Francisco just passing an ordinance providing tax incentives to urban agricultural zones. In order to fulfill the food goals of consumers and cities, there must be infrastructure to support urban food systems. 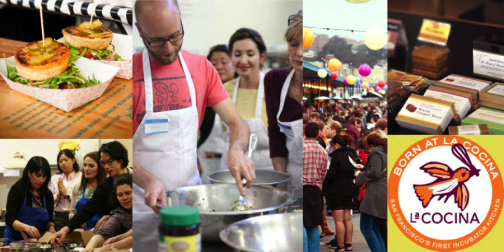 This past Sunday, on a foggy morning in San Francisco, La Cocina, a food incubator for low-income food entrepreneurs, hosted its 5th annual Food + Entrepreneurship Conference. Uniquely positioned as a non-profit that provides food producers with access to kitchen space, investment, and customers, La Cocina is building the Bay Area’s local food economy one entrepreneur at a time. La Cocina is interconnected in a web of players who all came together for the conference, including food producers, distributors, wholesalers, innovators, policy makers, and investors for a diverse and juicy conversation.

Geetika Agrawal, La Cocina’s Senior Program Manager explained that the 2014 conference was inspired by a question that the organization has been grappling with over the past year, how to grow a great environment for good food, with good food meaning good for the environment, healthy for consumers, and creating a livelihood for the producer. The conversation on how to cultivate this type of environment is largely tied to urban infrastructure.

In 2013, San Francisco based Spur, a research, education and advocacy non-profit focused on solving urban problems, released Locally Nourished, a report on strengthening the Bay Area’s regional food system. Spur’s third recommendation focused on building out the infrastructure of the local food economy to “promote forming, retaining, and expanding businesses that provide food processing, manufacturing, and distribution.” Creating a thriving local food system requires investment in all the players that form the infrastructure of an urban food economy.

Spur also mentioned the importance of a regional agribusiness economic development organization to provide financial support, regional business exchange, and agritourism initiatives. A regional agribusiness organization would create infrastructure in the form of networking and information sharing amongst players in the regional food economy. This type of infrastructure would create connective tissue between organizations, allowing individual players to think and act systemically towards larger goals. Without industry associations, there is no infrastructure to turn individual food producers, processors, and distributors into a regional system.

Technology is also having an impact on the infrastructure of urban food systems. Companies like Farmigo and Good Eggs are using software to allow consumers to purchase directly from the food growers and producers. Benzi Ronzi, co-founder of Farmigo, explained at La Cocina’s conference that, “Software has the ability to collapse the food supply chain.” By consumers choosing to purchase directly from farmers, it eliminates price cuts that occur from middle players and more money goes to the producer. However, this strategy is based on what Benzi calls “economies of communities.” It requires the consumer to be part of the solution by choosing to pick up their food at central locations in their community instead of using home delivered groceries. The software provides the virtual infrastructure to build and grow local food communities.

Even with innovation in physical and virtual infrastructure for urban food systems, equitable access is still a concern. Many communities in the US are not only located in food deserts but also face issues of limited computer literacy or limited access to Internet. These issues inhibit their ability to access good food through online platforms, like Farmigo or Good Eggs. Organizations such as The Corbin Hill Food Project in Harlem, New York are popping up to change this reality. Corbin Hill Farm links farms in upstate New York to community organizations in underserved areas of the city to make local produce accessible for neighborhoods like Harlem and the Bronx. The Corbin Hill Food Project actually leverages Farmigo’s technology to make this possible. While there is still a long way to go before all communities have equitable access to local food systems, organizations like Corbin Hill are yet another key player in making it possible. 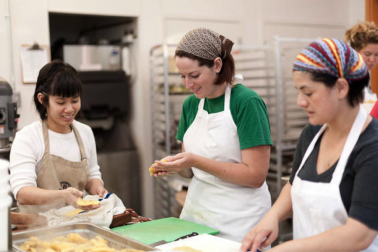 The infrastructure required to support an urban food system is by far more than brick and mortar. It takes on the form of non-profits that incubate food entrepreneurs, investment in processors and distributors, trade associations to organize the regional system, technology to collapse the supply chain, and social enterprises that bring local food to underserved communities. It requires the collaboration and effort of public and private entities and an educated consumer base that wants to support local businesses.

This all ties back to the hard work of organizations like La Cocina who are looking to not only support entrepreneurs but also create thriving, inclusive communities. In a conference session on The Future of Buying Food, Kevin Watt of Early Bird Ranch said it best, “Agriculture has the word culture in it because it is all pervasive.”  How we choose to build the infrastructure of our food system and how we choose to organize our communities around food will have a significant impact on the resiliency of our local economies, our health, and our environment.