Horacio Terraza is the coordinator of the Inter-American Development Bank’s Emerging and Sustainable Cities Initiative (ESCI), Infrastructure Management and Environment Sector. He is also a Lead Water and Sanitation Specialist with the Water and Sanitation Division. Trained as a mechanical engineer at the University of La Plata in Argentina, he has extensive experience developing complex projects related to urban and industrial pollution, working for 20 years in the private sector and multinational development organizations. Horacio also holds a Masters in International Economics and International Relations from SAIS at the University of Johns Hopkins.

The Case of Combined Sewer Overflows

Environmental degradation of urban rivers and water bodies is a common concern—both in developing and developed cities.  In Latin America, the situation is particularly critical in major metropolis. Rivers like the Tiete in Sao Paulo, and Matanza-Riachuelo and Reconquista in Buenos Aires, have suffered decades of uncontrolled discharges and neglect. One of the most usual contaminants is the organic load due to the sewerage discharges. The organic loads needs oxygen to get degraded in the water. Thus, excessive sewerage discharges greatly reduce the available oxygen for aquatic life, making it harder to sustain the ecological chain. In some areas of the Matanza-Riachuelo in Buenos Aires, dissolved oxygen is practically zero—literally a dead river.

Combining sewage and stormwater collection systems tends to be a cost-effective solution for a city. With one tunnel for both sewage and stormwater streams, the initial investment and operation of the system are reduced versus the separate-tunnel option. However, heavy rain events can easily exceed the capacity of this system.  This causes overflows that result in the discharge of a mixture of untreated stormwater and sanitary sewage directly into the receiving river, lake or sea, with negative environmental and public health consequences.

So, how can cities strategically plan and manage their infrastructure to address this problem?

The most traditional option is the “gray” infrastructure one, in which sewerage mains, tunnels, and wastewater treatment plants, plays a key role in collecting, conveying and treating the sewage and stormwater prior to discharge. The case of expanding the existing gray infrastructure for meeting the demands of population increase in London, UK will be reviewed as an example.

However, the “Green” infrastructure” can complement and make the “grey” one more cost-efficient reducing the volume of stormwater collected—thus avoiding  overflows during heavy rain events. Green stormwater infrastructure imitates natural hydrologic processes that reduce runoff by absorbing stormwater. One type of this stormwater infrastructure is bioswales that use rainwater “harvesting” techniques by directing runoff to landscaped areas that retain and infiltrate rainwater. Green infrastructure can also have community benefits by acting as recreation areas, while increasing property values in the neighboring blocks. One such example will be reviewed for the City of Cleveland, Ohio.

Use of Gray Infrastructure—The Case of London

In a typical year, 39 million tons of untreated sewage are discharged into the River Thames. The London sewerage system, designed originally in 1850 for a population of 4 million, was prepared to overflow under high demand events into the River Thames via 57 combined sewer overflows (CSOs), located along the banks of the river.

London’s population is now over 8 million, and the system is out of capacity. Some CSOs discharge untreated sewage into the river on average more than once a week, and after only 2 mm of rainfall. The growth of London’s population, as well as an increase in building developments and paved surfaces, has meant that overflows from the CSOs happen more and more frequently.

To comply with UK and European standards, Thames Water utility developed the project Thames Tideway Tunnel. The Thames Tideway “trendy” scheme is a proposed 25 km (16 mi) tunnel, with an internal diameter of 24 ft running mostly under the River Thames through central London, which will provide storage and conveyance of combined raw sewage and stormwater discharges that currently overflow into the river. 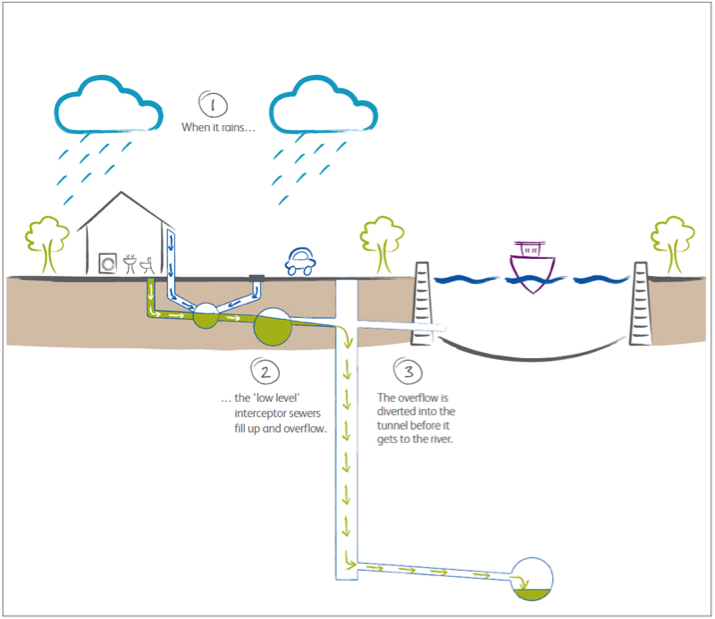 Working with the Environment Agency, Thames Water identified the most polluting combined sewer overflows. The proposed tunnel will control 34 of these CSOs, via transfer tunnels along the way. The captured sewage would then be transferred to Beckton Sewage Treatment Works, a wastewater treatment plant located downstream, and currently being upgraded to increase capacity. This connection will be done via the Lee Tunnel (already under construction), and the plant will provide  treatment to the overflow before discharge.

Once constructed, the system is expected to reduce the number of overflows to a maximum of four times a year. The entire project is expected to take between six and seven years to complete at a cost of $6.4 billion.

The Case of Cleveland, Ohio

A purely “gray” infrastructure approach might not always be the most effective solution. The Combined Sewer Overflow (CSO) program for Cleveland is a hybrid approach, combining gray and green infrastructure. The City of Cleveland Combined Sewer system covers 75 square miles, with more than 50% of this area being paved surfaces.

Project Clean Lake, an initiative developed by the Northeast Ohio Regional Sewer District (NEORSD), seeks to address water-quality issues caused by CSO discharges in order to comply with the federal Clean Water Act. The majority the investment in Project Clean Lake will fund the construction of seven tunnels, two to five miles long, and up to 24 feet in diameter. 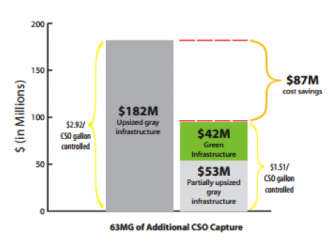 The original budget was not enough to meet the CSO standard, an additional $182 million were required.  The innovative part in this project, is that $42 million of the total budget will be used for green infrastructure, including parks, private-sector development projects, and vacant land reconversion in strategic locations of the city, generating cost savings of $87 Million. In other words:  the investment in green infrastructure will reduce the need for upsized gray infrastructure, thus yielding savings of about $87 million.

Environmental degradation of urban bodies of water continues to be a major concern for cities around the world. Gray infrastructure is critical for adequate collection, conveyance and treatment of the combined sewage and stormwater discharges.

However, considering green infrastructure as part of sustainability and urban planning efforts is critical. Green infrastructure can not only help to reduce stormwater runoff (and thus reduce the required gray infrastructure) in a cost-effective way, but it may also be an essential tool in designing a more sustainable urban landscape and key component in improving the general population welfare.