Getting Kids Outside to Play: Easier Said Than Done

Ed Foster-Simeon has served as President & CEO of the U.S. Soccer Foundation since 2008 and has more than two decades of experience at the local, state, and national level of the game.

It’s well-known that today’s kids don’t get enough exercise. And it’s a common assumption that this problem exists, in part, because children spend their time watching TV or playing video games or chatting with friends. They just need to get off their phones and tablets and go outside and play, right? Well, it’s not always that simple.

Outdoor recreation might be easy for some youth in suburban areas who have access to parks filled with playgrounds, soccer fields, and other amenities. But for children who live in urban neighborhoods, even in cities like New York with large parks, there is often a lack of public spaces near residential neighborhoods or schools. Due to this lack of access and proximity, children in urban areas are left to find places to play wherever they can find a space. It might be an asphalt lot lined with dumpsters or an alley between buildings; these accessible places aren’t always safe.

Research shows that children living in underserved communities are more than four times as likely to lack recreational facilities. This is significant when you consider that 71 percent of youth don’t get the recommended amount of physical activity, and that one in five school-aged children has obesity. The lack of safe places to play is an added barrier to living a healthy lifestyle for these children.

The solution isn’t as easy as telling our youth they need to go outside and play. We need to help bring safe play spaces—and programming—to the areas where our kids live and go to school.

Our Solution: The “Mini-Pitch”

At the U.S Soccer Foundation we aim to bring quality soccer programming and play spaces to more kids. To further expand our after-school soccer program, Soccer for Success, we knew we needed more quality spaces to play the game, especially in urban areas.

Our solution: build small-sized fields, which we dubbed ‘mini-pitches,’ in abandoned or underutilized spaces. For one of our first projects we built a small pitch, using Sport Court’s futsal surface product, between two housing developments in New York City.

We knew this space would be used for our soccer program. But what we didn’t expect was another result. Even when the program wasn’t being run, the brightly colored pitch attracted both youth and adults to play on the field. During daylight hours, you will almost always see people utilizing the pitch.

As we started to build more of these pitches, we saw more of the same results. We also began to use other materials to build these mini-pitches, often resurfacing lots with an acrylic coating that also provides a quality surface on which to play soccer. We designed the pitches in bright colors, which not only attracted people to use them, but also transformed the look and feel of the neighborhood. We found that for both structured and unstructured play, people were utilizing these spaces often. 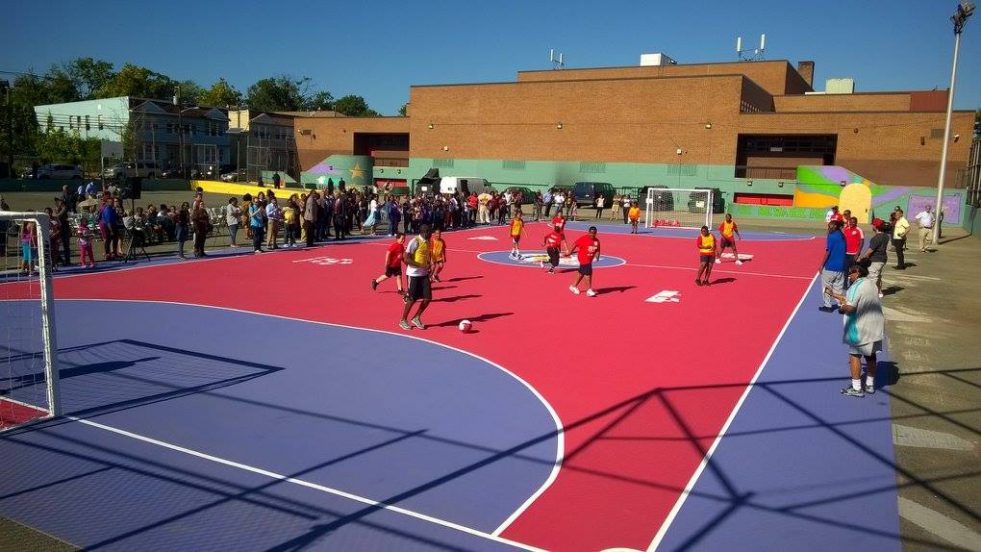 After building many of these mini-pitches, we were confident we had a solution that worked. But even though these mini-pitches were economical, and significantly less expensive than full-sized grass or synthetic turf fields, they weren’t free. We started to question how we could implement these projects on a larger scale and bring mini-pitches to more neighborhoods. We found that building public-private partnerships was the key.

A great example of the power of this type of partnership is found in New York City. Last summer, the U.S Soccer Foundation announced that it would partner with the Mayor’s Fund to Advance New York City, adidas, and the New York City Football Club (NYCFC) to build 50 mini-pitches across all five boroughs over the next five years.

The Mayor’s Fund and other city departments embraced these mini-pitches because they addressed inequalities in access to and use of parks and outdoors spaces. NYCFC and adidas liked the idea of joining with the Foundation to bring soccer to more kids who might not otherwise have access to the sport. A bonus is that the pitches would include the organizations’ logos, an excellent branding opportunity that got them in front of potential fans and customers. Together, all partners committed to raising the funds to build 50 mini-pitches throughout the city and provide free programming for residents.

For the project to be successful you need a local champion who knows all the partners at the table and can help drive the effort on the ground.

Engaging non-traditional partners is key. Soccer was a great hook. But we ultimately got partners on board because of the many benefits that come from access to play—including the positive impact on the health outcomes of the entire community.

The Foundation’s programming has proven health and social outcomes for participants. Having evidence of this made all in the difference in seeing this project through to the finish line.

The bottom is line is that these mini-pitches address barriers that impede people from being physically active by expanding access to play. In fact, more than 8,000 youth and adults have access to each pitch, on average, in densely populated areas. That translates to hundreds of thousands of people across our cities that have somewhere to exercise and play soccer right in their neighborhoods.

We still have work to do. But pitch by pitch, we are making it a little easier for all our children, no matter where they live, to ‘go outside and play’.