Sarah Hines works as the Urban Field Station coordinator in the Research & Development branch of the USDA Forest Service, linking scientists and scientific information with communities and decision makers at local and regional scales to inform the shared stewardship of our nation’s forests. She received a BA in biological anthropology from Harvard and MS and MBA degrees from the University of Michigan.

Morgan Grove is the Team Leader for the Baltimore Urban Field Station in the Research & Development branch of the USDA Forest Service. He has been the lead for the Baltimore Urban Wood Project for the past seven years, which started with the a study plan of instruction, “Grove, urban wood, figure it out.” He has a BA in architecture and environmental studies from Yale College and a MS in community forestry and PhD in social ecology from Yale University.

Among some of society’s most complex and interconnected challenges – unemployment, ecological degradation, communities fractured by lack of opportunity and incarceration – it’s understandable if you didn’t realize that wood waste is also problem. Yet the “problem” of urban wood waste, when viewed differently, can become a remarkable nexus for addressing such complex challenges.

Wood accounts for more than 10% of the annual waste material in the U.S.; in 2000, more tree and woody residue was generated from urban areas than was harvested from National Forests. And this waste creates costs – for municipalities, businesses, and landfills that pay for its hauling and disposal. But by far the biggest losses associated with urban wood accrue in the form of missed opportunities. By rethinking the use and disposal of urban wood, cities and businesses can generate profits, reduce costs, and develop new revenue streams. But such efforts require multi-sector collaboration, innovation, and trust. Viewed as part of a complex system, urban wood can become a conduit for tackling a complex landscape of social, environmental, and economic problems. In Baltimore as in many other cities, this complex landscape of problems includes: 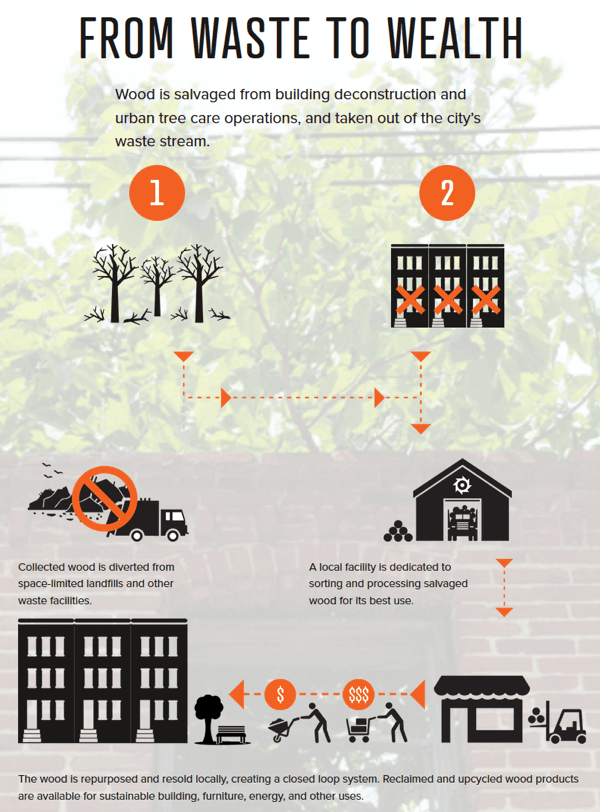 Wood from tree care operations and building deconstruction can be transformed from waste to wealth as part of a holistic urban wood economy.

The Dirt on Wood

Wood waste generally comes in two forms: fresh-cut wood—which consists of felled or fallen trees that had been growing in a community; and wood from deconstruction—that which can be reclaimed from abandoned homes and buildings. Post-industrial cities throughout America generally have underutilized supplies of each.

In most communities, when a tree does or must come down due to a storm, decay, disease, or construction, it’s treated more or less as a waste product, not timber. The trunk and significant branches are cut into small lengths for ease of handling and disposal. The rest is chipped. These components may have a second life, in the form of low-value mulch or firewood, or they may simply be dumped – either way, their handling and disposal is typically a cost and liability.

Few operations currently have infrastructure or processes to consider each tree’s value and process it accordingly. Yet according to research done by the USDA Forest Service, reclaiming fresh-cut wood alone from the national waste stream could supply 30% of the annual consumption of hardwood trees in the country. Diverting wood from the waste stream preserves valuable material, reduces landfill crowding, and creates hyper-local and charismatic materials for architectural and furniture design and more. Having systems in place that can effectively put large pulses of fresh-cut wood to use will be ever more critical as cities face more extreme weather events from climate change and pests and pathogens from globalization. 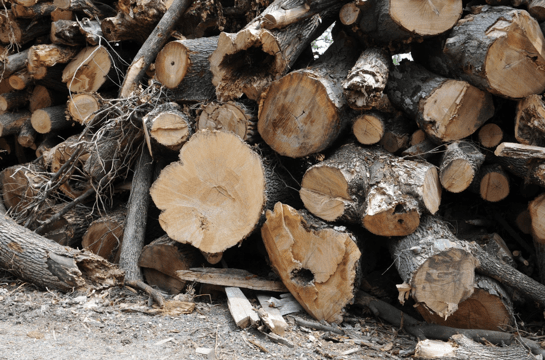 Without thoughtful repurposing, this useable urban wood may be chipped and/or dumped in a landfill.

In addition to this fresh-cut supply, many cities have unrecognized treasure in the form of old growth timber that is currently locked up in vacant, abandoned, and crumbling homes and buildings. In Baltimore alone, there are officially 16,000 vacant and abandoned buildings, but unofficial estimates suggest this number could be as high as 40,000. Many of these buildings were built over a century ago using virgin- or second-growth wood of native eastern deciduous forests with trees that were often 300-500 years old when they were cut down.

In Baltimore, virgin southern yellow pine was used to build the joists and flooring in the majority of homes. This old-growth wood is “extinct” in the modern sense, as fewer than 0.01% of old growth southern pine forests still exist, and those that do will not be harvested for timber. Wood from these trees is of a size and quality that is not possible today, when trees are grown faster and on shorter rotations. It is denser, stronger, and more resistant to rot and termites – but primarily, it is gorgeous and rare. In addition, the century-old brick of the rowhomes can be its own unique treasure – possessing quality, character, and heterogeneity that proves rare today. And yet cities have been wasting this resource – demolishing homes and sending tons of rubble to the landfill. All the while, too many neighborhood residents sit by idly, unable to find employment, watching as these 2-3 crew demolition operations proceed.

Working with partners such as Humanim and the Baltimore City Department of Recreation and Parks, the USDA Forest Service has developed a framework for urban wood utilization that can support development of urban wood economies. The generation of wood waste material, and its disposal or reuse, can happen opportunistically or strategically. If it is viewed as a byproduct of an activity, it will likely be handled opportunistically. That is, it will be disposed of in a path of least resistance with minimum effort, often with the materials going to a landfill or, in the case of fresh cut wood, with the material being chipped into mulch. Alternatively, if it is viewed as part of a reuse process, it may be salvaged, sorted, and aggregated to sufficient scales that provide an opportunity for various wood markets.

The Urban Wood Project: A Framework for reusing wood from fresh-cut and deconstructed sources 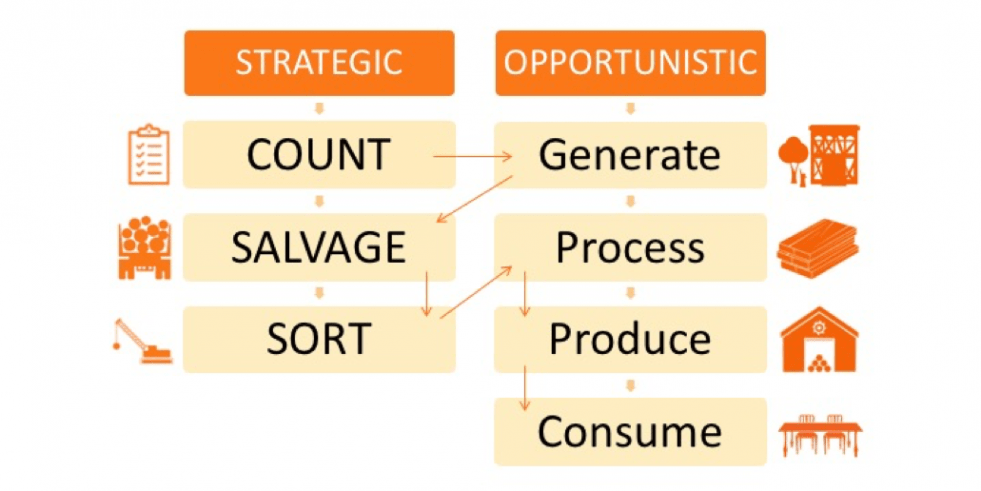 The Urban Wood Project provides a framework for reusing wood from fresh-cut and deconstructed sources.

In our next post, we’ll discuss the ways in which developing a successful urban wood economy depends on the collaboration of a variety of actors, and the ways in which markets and financing can help build sustainable supply chains and capture holistic value.