Five Reasons to be Optimistic About Sustainable Urban Mobility

Holger Dalkmann has fifteen years of experience working in the field of transport, sustainability and climate change. He joined WRI in 2011 as the Director for its EMBARQ program, which catalyzes environmentally and financially sustainable transport solutions to improve quality of life in cities.

According to the United Nations World Urbanization Prospects, cities will add over 2.5 billion people in the next 40 years, with 90% of this growth coming from cities in emerging economies. China and India alone are expected to add 276 million and 218 million urban residents by 2030. While there is no question that future generations will live primarily in cities, whether they will do so in a socially, environmentally, and economically sustainable way remains to be seen.

With rapid urban growth come a number of challenges for city leaders, many of them related to increasing motorization and urban sprawl. Too often, cities are trending in the wrong direction. Urban air pollution, for example, contributes to over one million premature deaths each year and costs 5% of GDP in developing countries. Roughly 3,400 people die in traffic crashes every day, the majority of these pedestrians and cyclists in less developed countries. In the United States, commuters spend 4.8 billion hours in traffic each year, translating to USD 101 billion in lost economic productivity. At a global level, cities continue to be major contributors to climate change, and account for 70% of greenhouse gas emissions.

While these numbers paint a bleak picture of the urban future, they don’t tell the whole story. Around the world, cities are taking ambitious action to improve quality of life through connected, sustainable urban mobility. While the challenge is great, shifts in behavior, technology, and politics will show that there is hope that future generations will inherit more sustainable cities.

Here are five reasons to be optimistic about the future of our cities.

Despite years of growth in car ownership and vehicle travel, it appears as though some have begun to choose another path. A study of eight industrialized countries found that vehicle travel rose steadily from the 1970s to 2003, but has since leveled out. Another study found that vehicle miles traveled among younger generations in the United States decreased by 23% between 2001 and 2009.

On top of rising fuel prices, increasing traffic congestion, and an increase in the relative affordability and convenience of public transport, a major cultural shift stands behind this trend. Across Europe and the United States in particular, younger generations have opted into the sharing economy and moved to more walkable urban communities. It even appears that most of the millennial generation would sooner say goodbye to their car than their smartphone, and many in the United States no longer pursue drivers’ licenses. In fact, just 69.5% of American 19 year-olds has drivers’ licenses in 2010, down from 87% in 1983. This shift has also contributed to increased use of sustainable transport, most notably cycling and walking, which could catalyze reinvestment in public transport and a reduction in automobile subsidies.

The economic case for sustainable cities is strong

It has become increasingly clear that pursuing connected, compact urban development makes both financial and environmental sense. The Better Growth, Better Climate report found that cities could save USD 3 trillion in infrastructure investments over the next 15 years by pursuing low-carbon growth. This path yields both local and global benefits.

For example, research from and EMBARQ – the World Resources Institute (WRI) initiative for sustainable transport – on the socioeconomic impacts of bus rapid transit (BRT) systems found that air quality improvements resulting from Mexico City’s Metrobús Line 3 are poised to reduce respiratory illnesses and save the city an estimated USD 4.5 million in health costs. At the global level, 11 BRT projects in Mexico, Colombia, China, India, and South Africa are forecast to reduce emissions by 31.4 million tons of CO2 equivalent over 20 years. That amount equals the annual greenhouse gas emissions from more than 6.5 million cars.

While global ambition to tackle climate change is picking up, local actions have had the most impact in recent years. At September’s U.N. Climate Summit, city leaders were at the forefront of efforts to catalyze action on climate change, unlock finance for low-carbon development, and scale up sustainable transport solutions. Furthermore, the new Compact of Mayors initiative builds on cities’ existing climate commitments, providing a platform for transparent measurement and reporting on emissions reductions. Analysis shows that 228 cities, home to 436 million people, have already voluntarily committed to saving 13 gigatons of greenhouse gas emissions by 2050.

Sustainable mobility solutions are scaling up

The magnitude of the challenges today’s cities face demands solutions at scale. In 2002, just 45 cities had BRT systems. Compare that to 186 cities (and counting) today. BRT is just one example of the recent growth in sustainable transport solutions worldwide. Car-sharing, bike-sharing, pedestrianization, and congestion pricing are all on the rise as cities look to combat traffic congestion and improve quality of life. 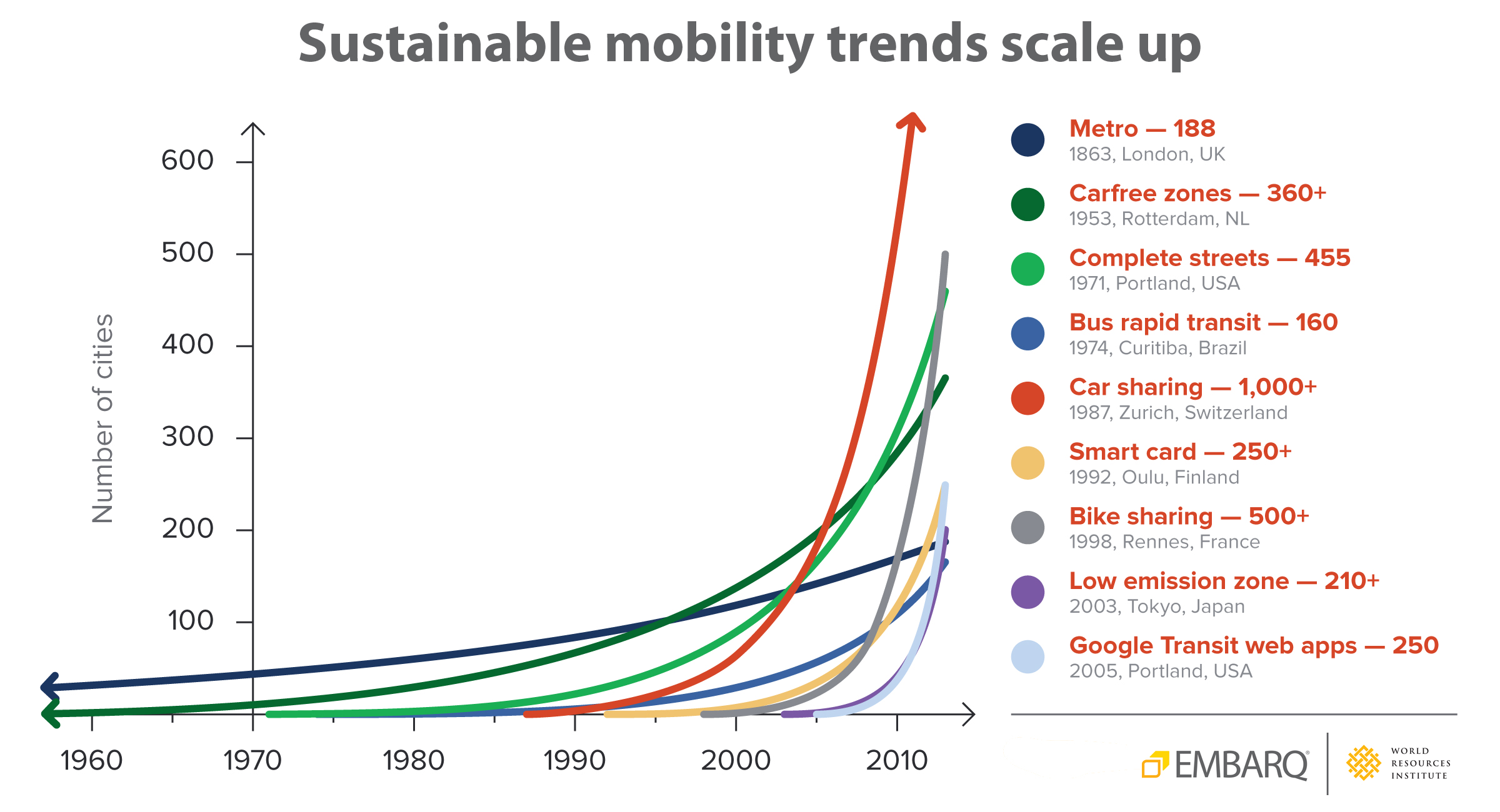 Sustainable mobility solutions continue to grow as cities move away from auto-dependency. Graphic by EMBARQ (2013).

While many of these solutions have been around for decades, advances in technology have accelerated their integration and implementation. Many transport-specific technologies have helped to improve quality of service while reducing costs. Technology transfer between the developed and developing worlds has also played an important role. For example, GPS and mobile applications have improved passenger experiences on India’s auto-rickshaws. Technology has also revolutionized the way citizens engage city leaders, leading to a new era of political participation and inclusion.

These technology advances can help cities in emerging economies leapfrog past car-dependent development and opt for a more sustainable path early on.

While these five trends are already taking hold of many of our cities, there is work to be done to mainstream sustainable urban mobility solutions. City leaders can tap into the three key enablers of political will, finance, and data and technology to build momentum towards cities that are built for people, not cars.

Scaling up sustainable urban mobility solutions worldwide, coupled with the necessary steps to make them locally suitable, can deliver more inclusive and prosperous cities. Developing attractive, localized solutions is perhaps the most challenging piece of the puzzle, but also the greatest opportunity for collaboration among local policy-makers, business leaders, entrepreneurs, and action-oriented organizations to create lasting change. With the future of the world’s population in cities, now is the time to make that change happen.