Brian Cotton is a vice president at Frost & Sullivan, where he leads the firm’s global Growth Consulting practice in the IT and telecoms vertical. His involvement in smart cities started in 2006 and he’s been advising public sector, IT, energy and security clients on the topic ever since.

The smart city is a global phenomenon driven by a confluence of rapid urbanization, aging infrastructure, and advances in information technology, which are all super-charged by the imperatives of the ever increasing need for government austerity. Globally, it is a trillion dollar market with multi-billion dollar companies supplying multi-million dollar solutions to cities with swelling populations and shrinking budgets. The good news for the industry is there are a lot of cities in this situation, all needing better, smarter solutions. By 2025, there may well be more than 100 cities around the world that are fully “smart,” or on the road to becoming that way.

Most competitors in this space understandably target the low-hanging fruit of the biggest cities with the biggest budgets. But these big sales are often complex transactions of complex solutions. Typically, smart city solutions are designed according to a systems-of-systems approach (represented in the figure below). All the layers of the domains of a city – transportation, energy, public safety and security, buildings, healthcare, education and social services, water and waste – are meticulously analyzed and teased apart only to be stitched back together again into new solutions that are scalable, efficient, functionally optimized, future-proof and, most of all, cost-effective. 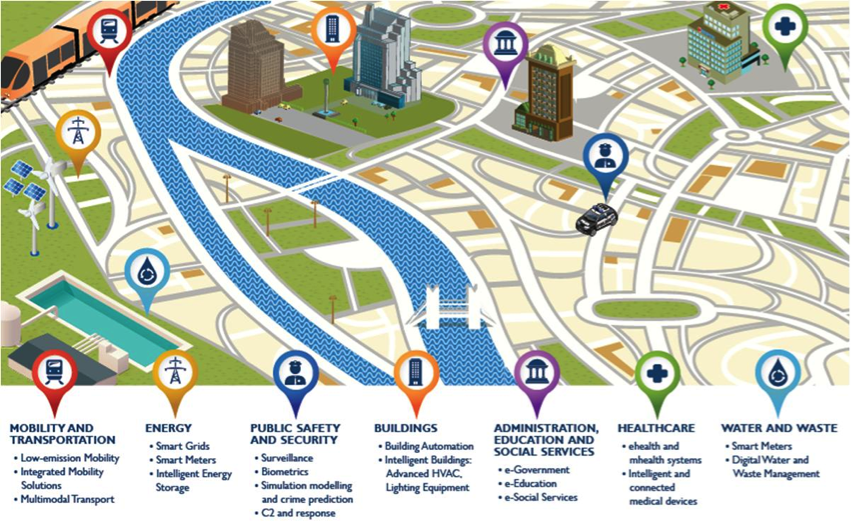 Whenever we are dealing with the public purse, implementing these large-scale projects can pose a host of challenges technically, financially and politically.

Yet with most of the focus on the large and medium sized cities, the beauty of small is most often overlooked. I believe there is also a wealth of opportunity in applying smart city solutions to smaller metropolitan centers. There are a 100 obviously big city centers, but there are thousands of not-so-obvious small cities.

The Advantages of Small

Rather than being a disadvantage in the smart city world, small areas have numerous advantages when it comes to planning, implementing and operating smart city infrastructure and service projects.

In small communities, systems aren’t as big and all encompassing as they are in larger cities. Moreover, a stronger sense of community identity can also help align citizens around smart city solutions. This suggests that small areas may likely adopt smart city solutions faster than their large city counterparts. With strong community engagement in the designing and building of new solutions, post-implementation, and the rate of adoption, satisfaction and, ultimately, success may also be higher than in larger cities.

There is currently very little written about “small, smart city” opportunities. However, a paradigm can be developed that enables us to measure these opportunities, organize our thinking and create strategies to implement small smart city solutions. For instance, consider the following three types of small urban areas.

Micropolitan statistical areas, or “micros,” were created as a new census category by the U.S. Office of Management and Budget (OMB) in 2003. Broadly defined, they are catchment areas based around a central urban cluster of 10,000 to 49,999 with a substantial dispersed population surrounding them. Those living outside of the central cluster commute into it for jobs, shopping, medical appointments, schools, etc.

A seminal paper by Robert E. Lang and Dawn Dhavale in 2004 outlined the characteristics typical of these areas in the U.S.:

Although this is a description of typical micros in the United States, micropolitan areas with varying qualitative and quantitative characteristics exist all across the planet in the thousands. This makes for a very large opportunity. There are approximately 570 micros in the U.S. and 160 in Canada. However, population profiles in other regions of the world suggest the potential is exponentially larger in even more populous regions such as China, Europe, India, South America and Africa.

Another type of small urban area is the neighborhood. Neighborhoods typically have a unique character and distinct identity that defines them from other parts of the city. Many have active citizen groups dedicated to supporting and improving the welfare of their residents, businesses and visitors.

The sheer number of neighborhoods in cities around the world – and there are at least 4,400 cities with populations of more than 150,000 by one count – suggests a possible market for smart neighborhoods in the tens of thousands. This further adds to the potential for smart in small.

Still another type of small, smart opportunity is the academic campus. Ranging from large, land-grant universities to liberal arts colleges, many campuses are essentially cities unto themselves. They often have dedicated physical plants, police forces, transportation systems, and administrations, functioning in many ways like a small city. And, in many of these campuses, smart city solutions may find an ideal environment for adoption and innovation. Approximately 7,500 universities globally (according to Greentech Media, Inc.) represent a sizeable segment to pursue.

The Big Opportunities for Small

Improving infrastructure and services in small urban areas and remote communities may no longer be a nice-to-have, as evidence suggests they are becoming a need-to-have. In many nations, small towns are opting to dissolve and amalgamate with larger entities to form stronger micropolitan areas. Springhill, Nova Scotia, a small Canadian town of 4,000 recently did just this. As the town’s mayor stated, “this is going to be a trend within the next three, four, five years. You’re going to see a lot of amalgamation… small towns just can’t survive anymore.” (Listen to the full interview here.) Consolidation, increasing efficiency, extending capabilities and boosting socio-economic attractors of a region are becoming critical to the survival of many of these smaller communities.

Targeting micros, neighborhoods, and university campuses with smart solutions can be a promising new horizon in smart cities. With fewer barriers to implementation coupled with the sheer size of the potential market, smaller projects can represent an attractive option for solution developers, city administrations and citizens alike. Ultimately, the success of a smart city isn’t in the technology, but in the concrete differences it makes in the lives of its citizens. “Small” can be big – we only need the right lens to see it.