Wellington “Duke” Reiter, FAIA, the Executive Director of the UCX and senior advisor to the president at Arizona State University, is former Dean of the ASU College of Design, President of the School of the Art Institute of Chicago, and founder of the Ten Across (10X) project.

I have spent more than twenty years living and working in two cities whose very existence is challenged: New Orleans and Phoenix. In each case, water is the significant source of skepticism as to whether inhabitation can persist in its present form under such circumstances. Given their geographic dispositions—one below sea level, the other isolated in a harsh desert environment—there is a palpable lack of sympathy for those confronting flooding or drought in these seemingly illogical locations.

New Orleans, Phoenix, and some of the largest cities in the country are connected by the U.S. Interstate 10, the premier east/west axis that unites the two coasts and traverses the most rapidly expanding area of the nation in the process. Having “lived” the 10, I have come to see it as much more than a 2400-mile ribbon of concrete. This singular transect presents a uniquely American landscape, one shaped by industry, demographic change, global economic forces, and human interventions in a wide variety of delicate ecosystems.

In fact, I believe this corridor provides the most compelling window on the future of the country as a whole, one that presents the pressing issues of our time in their highest relief. In addition to the existential subject of water, this corridor is simultaneously on the front lines of human migration, wealth disparity, global commerce, climate change, and the grinding federal, state, and city gears of governance. It is a living laboratory like no other.

The challenges outlined above have no regard for artificial boundaries and will certainly not be constrained by them. Using the I-10 as a framing device, ASU, in partnership with a range of cities, universities, foundations and subject matter experts, has launched the Ten Across (10X) initiative, a project of a scale commensurate with the topics under review. 10X is conceived as a long-term effort, one enriched by repeated literal and figurative passes across the I-10, by unique explorations of each major subject, and by bearing three questions always in mind:

The recently concluded first annual Ten Across Water Summit demonstrated the utility of the 10X geography and the purposeful mixing and matching of different conditions. At this event, the subject of water was purposely bracketed by the “new normal” drought conditions of the desert southwest and the inundation and massive land loss of coastal areas along the Gulf of Mexico.

While these two ecosystems could not seem more unrelated, it was their difference that was key to a productive dialogue and meaningful exchange of ideas—the essence of the 10X platform. What was revealed were the common truths of resiliency. Conversations amongst the participants focused on forward-leaning strategies applicable to the spectrum of circumstances along the entirety of the I-10, and beyond. Emergent voices were heard, technologies demonstrated new ways of knowing, and the vital role of leadership was reinforced. 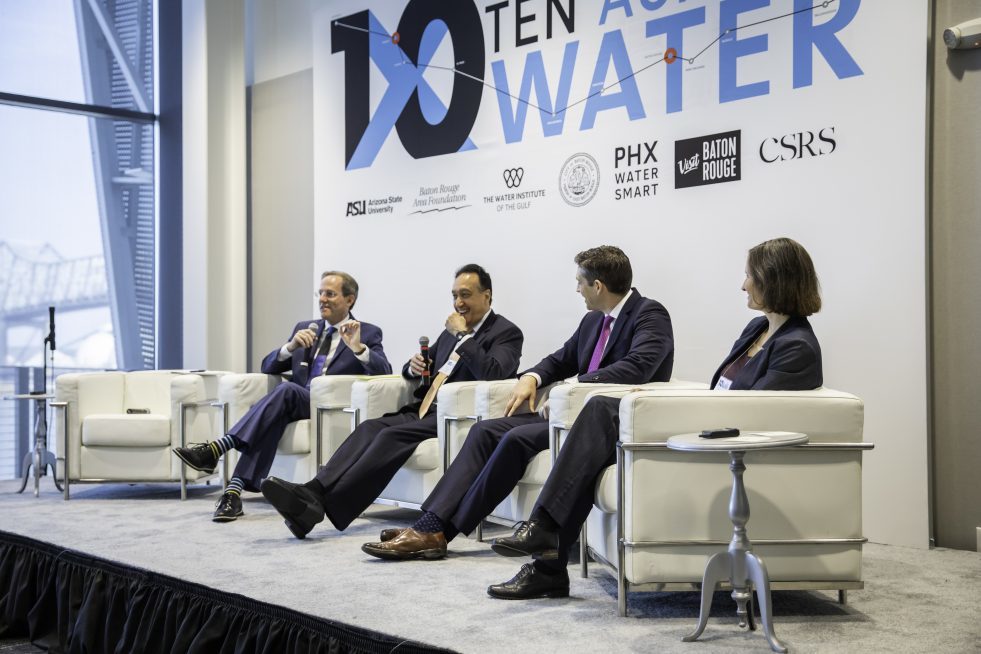 Guest speakers debate water, environmental and economic issues facing cities along the U.S. I-10 corridor during a 10X Water Summit panel discussion held Thursday, May 16, 2018 at the Water Campus in Baton Rouge, La.

As we begin to approach other critical issues and landscapes within the corridor, we intend Ten Across to serve as a forum for understanding the physical, social, economic, and cultural constructs which define us, and the “course corrections” required to achieve a more sustainable and inclusive society. The future has come early to this cross-section of the country and we intend to leverage it fully.

Ten Across is designed to accomplish two things: first, to represent the world as it is in all of its complexity and nuance and, second, to imagine alternatives to the present trajectory. To achieve the latter, as first illustrated through the Water Summit, the pairing of contrasting conditions can unlock new modes of understanding—which brings us back to two of our principal I-10 cities.

New Orleans—celebrating its 300th year—is positioned where a city should not be, but where one was necessary to control access to the Mississippi River and the interior of the North American continent. By contrast, Phoenix is a relatively new, artificial island built on twentieth century technologies and dependent on a slender lifeline of water, pumped hundreds of miles across the desert.

However different their origin stories and the ground upon which they are built, both cities are instructive reminders that even our grandest enterprises are only provisional. As such, they are emblematic of the Ten Across project – the necessity for keen observation and the active construction of new narratives for the future.

Decades ago, my graduate work concerned the vulnerability of New Orleans and why addressing a knowable threat (hurricanes, in this case) is so difficult. One cannot observe the Hoover Dam and the bathtub rings of Lake Mead without feeling similar anxiety about an insufficient sense of urgency in the West. As the esteemed author Jeff Goodell offers in his recent book, The Water Will Come, “…we are not wired to make decisions about barely perceptible threats that gradually accelerate over time. We’re not so different from the proverbial frog that boils to death in a pot of slowly warming water.”

If nothing else, the objective of Ten Across is to imagine a rewrite of history before it happens.