Jonathan and Dan both work at the San Francisco Public Utilities Commission on the City’s clean energy programs. Jonathan is an architect and urban planner with experience in the sustainable design of affordable housing, public spaces, and other community projects. Dan works in the Energy Data Systems group, with several years’ experience in the power and renewables industry, and a Master’s in Wildlife Biology.

The San Francisco Public Utilities Commission is the municipal water, power and sewer services provider for the City and County of San Francisco. We generate and deliver power to hundreds of municipal buildings in San Francisco, including libraries, schools, fire stations, recreation centers, and office buildings. While this power is 100% greenhouse gas-free, the City’s large facility inventory brings with it a responsibility to use this energy as efficiently as possible. San Francisco has invested for many years in energy efficiency and renewable energy projects in these public buildings, and the City is saving over $5 million each year in energy costs as a result. 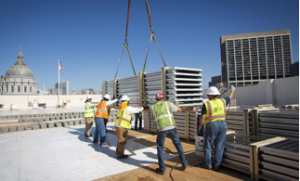 The SFPUC’s Energy Benchmarking project takes our efficiency programs a step further by providing data to the public that shows the year over year improvement in the City’s public building performance, identifying high performing locations as well as those that could benefit from further energy investments. We asked:

To help answer these questions, the SFPUC has worked collaboratively with 25 other partner agencies to collect, analyze, and publicly release data that details the energy performance of nearly 500 facilities, including almost 49 million square feet of building area. The Energy Benchmarking Report tracks the energy intensity of these buildings and provides a visual record of how the City uses energy and how each location compares to its peers. As the first city on the west coast to collect this type of data and release it publicly, San Francisco is providing transparency about its operations: in order to improve we first need to know how we are already performing.

In October 2014, the third annual report and public dataset was released, revealing that the energy intensity (energy use per square foot) of these hundreds of facilities improved 7.4% over the past five years, while the average carbon footprint of these buildings decreased 12.7% over the same time period. For buildings where an EPA ENERGY STAR score could be calculated, 80% of San Francisco’s public buildings performed better than the national average (even controlling for our relatively mild climate). The data shows that it is not just the newest buildings that are the best performers, either; recent energy efficiency improvements at City Hall, built in 1915, have contributed to its achieving a top ENERGY STAR score along with a Platinum LEED rating in the existing buildings category from the US Green Building Council.

To see the full details on the City’s own energy performance and where we can continue to improve, check out our website. We offer a range of clean energy programs including detailed energy audits and green building design assistance to help our customers find ways to save energy and money. Or maybe you want to jump right into the data from the 2013 Energy Benchmarking Report? That’s alright, too!

The San Francisco Public Utilities Commission is a department of the City and County of San Francisco that provides retail drinking water and wastewater services to San Francisco, wholesale water to three Bay Area counties, and green hydroelectric and solar power to San Francisco’s municipal departments and other retail customers.