Empowering the Chicago City Council for the Digital Age

Seamus Kraft is the executive director and co-founder of The OpenGov Foundation. Drop him a line at seamus@opengovfoundation.org and follow him on Twitter @SeamusKraft.

I am sure you’re familiar with some of the huge challenges facing the great city of Chicago: public safety, education and a looming debt crisis threatening to spread across critical public services. Chicago needs leaders able to confront these problems head on and turn ideas into tangible policies. Unfortunately, the gears of the City Council, and hundreds of other legislatures, are gummed up with paper and a process badly in need of a overhaul for our Digital Age.

At The OpenGov Foundation, where we work to bridge the gap between citizens and government and power lawmaking for modern democracy, we saw an opportunity to build a complete open source operating system for a 21st century municipal legislature – replicable wherever policy is made. We developed a close partnership with Chicago City Clerk Susana Mendoza and her team, committing to work side-by-side on making the city more efficient and able to serve its residents better.

But when we started work, it wasn’t with software or data, we instead needed to understand the history, culture and systems that exist today. We wanted to walk a mile – or ten – in the shoes of the men and women who make the council run, from the most senior alderman to the newest administrative staffer. Not only do we believe that this is what good partners do, we believe that it would help surface the best possible place to launch this long-term legislative transformation. It’s building with not for.

When we first attended a City Council meeting, it was impossible to ignore the reams of paper schlepped throughout City Hall. We knew all policies start as digital documents when they are written on computers, but we didn’t realize how briefly they exist in that state. Printing, stamping, cover sheets, scanning, formatting and more. It’s only once we witness, record and understand this process that we realize the opportunities. Thousands and thousands of legislative documents follow this inefficient path every year and even small improvements will echo with huge time and cost savings.

The first legislative document type we’re tackling is the humble commemorative resolution, which officially recognize an outstanding achievement, like a victorious youth sports team, or significant milestone, like turning 100, in the lives of Chicagoans. These resolutions are the most straight-forward, least complex pieces of legislation drafted, voted upon by the city council and promulgated to the public. They are regularly created by all 50 aldermen, the Mayor and the City Clerk. Even better, resolutions contain most components included in more intricate kinds of Chicago policy documents – both process and data-wise – but in an easier fashion for a technologist to transform from paper to the digital world.

Transforming these documents into modern open data points offers incredible possibilities for increasing efficiency, effectiveness and citizen engagement throughout the legislative process. Hence, our emerging theory of how to change the culture of government in free societies: data innovation leads to platform innovation leads to policymaking process innovation leads to a government that spends less, serves better and does it all without paying the soul-crushing costs of a paper-based world.

You do not need to be a pundit or a political scientist to see and understand those costs. Alongside the City Clerk’s team, we examined the process of one, non-consequential type of Chicago legislation: commemorative resolutions. In going through the full process, commemorative resolutions go from digital to paper to digital to another type of paper with additional steps where humans manually enter data that once existed digitally. Think about that. Each change of state and re-entered data point means duplicated, wasted effort that happens with every resolution considered by the Council. Here is a simplified view of that process: 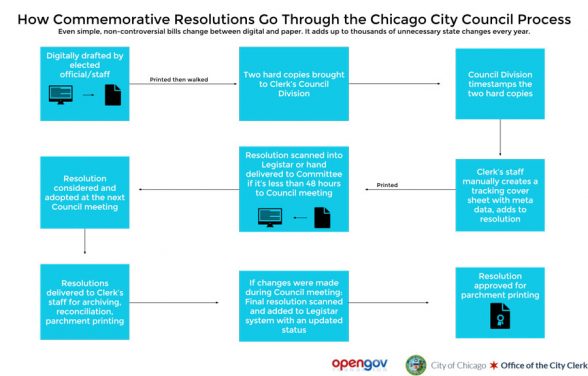 Any change of state is an opportunity for typographic, data entry and other all-too-human errors. This costs precious time and is work that, by and large, simply does not have to happen in the year 2016. Just to move forward in the process, people have to walk paper documents to other parts of City Hall. This is the ultimate cost of our paper-based democracies: needlessly felled forests of trees, wasted human capital, duplicative effort and risks of error-riddled policymaking.

Imagine the possibilities that will open up for the Chicago City Council and the people it serves once this process is digital-first, streamlined and efficient?

That is government culture change, guaranteed.