Economic Inclusion is the Key to Detroit’s Revitalization

Anika Goss is the Executive Director of Detroit Future City, a think and do tank focused on land use, sustainability, and economic equity in Detroit.

Detroit was built on the promise of a middle-class income and lifestyle, from the years of Henry Ford’s five dollar workday at his Model T plant, up until the late 20th Century. By the beginning of the 21st Century, however, white middle-class households had fled to the suburbs, and so had African-American middle-class households. By 2017, Detroit’s middle class dropped from 43 percent of the city’s population in 1970 to just 25 percent. This left a city in which 75 percent of Detroiters made $50,000 or less, and 78 percent of the population was African American.

It’s this decline in the middle class that pushed to begin looking at Detroit’s recent resurgence through a different lens.

Detroit Future City is a think-and-do tank that is responsible for advancing the 50-year Detroit Strategic Framework Plan. The Framework sets the long-range vision for land use and economic development in Detroit and was developed in 2012 with the input of more than 100,000 Detroiters. Currently, the organization focuses on land use and sustainability, community and economic development, and what we describe as “keeping the Framework fresh and relevant.” This third component to our work is an effort to keep Detroiters informed through publications and information sessions, but most importantly to maintain the integrity of the thousands of Detroiters who participated in crafting the vision of the original Framework.

Our most recent report, “Growing Detroit’s African-American Middle Class: An Opportunity for a Prosperous Detroit,” presents a new metric for equitable growth in Detroit, tracking the change in middle-class African Americans. 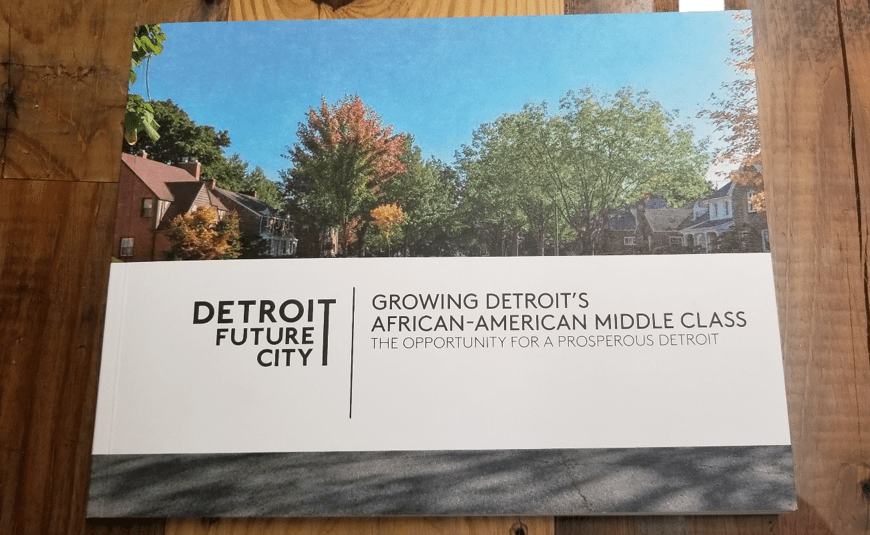 This metric for equitable growth is outlined in three concrete areas that align with our original Strategic Framework Plan:

The traditional concept of Detroit focusing on attracting primarily middle-class households was not a feasible strategy. DFC presented the idea that lifting existing households into the middle class, not just attracting new ones, could be a much more effective strategy. The growth component to this strategy was predicated on moving what DFC describes as the “near-middle-class” into the middle class. The near-middle-class is low- or lower-income households that fall just below our definition of middle class, or those households with incomes of $28,800 to $46,000. By improving the economic conditions for this group, we could improve the economic conditions for one third of the households in Detroit.

Improving Detroit’s neighborhoods is a critical component to growing and attracting middle-class families, thus the concept of place became the third equity issue. We learned from this study that the migration of the African-American middle class to the suburbs was far more devastating than we had assumed. The share of the region’s African-American middle-class households living in the suburbs rose from 28 percent in 2000 to 54 percent in 2017.

This is a clear wound of inequity, and if we are not intentional about increasing the number of neighborhoods that could be considered middle-class, we could potentially see a trend of white middle-class households living in the few stable parts of Detroit and a growing trend of African Americans moving to the suburbs as their economic conditions improve 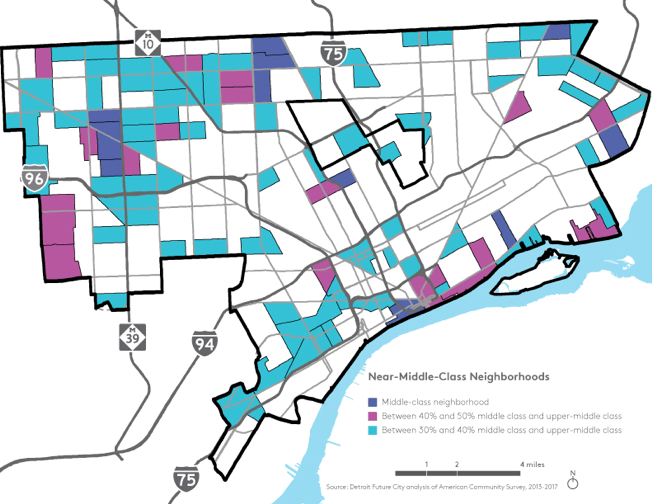 As part of this study, we convened a series of focus groups with nearly 100 Detroiters and metro-Detroiters, to find out what was keeping them from living in Detroit. Unanimously, the group identified high car insurance, high taxes, and poor-performing schools. Most importantly, they described these issues collectively as an economic barrier to living in Detroit and not worth the low-cost housing in the city. Therefore, creating a sense of urgency for our economic barriers and breaking down the silos to resolve these barriers must be our top priority.

Addressing educational attainment and higher wages as an economic strategy for growing the middle-class but it is only part of the solution.

Only 14 percent of Detroiters have a bachelor’s degree or higher. What we learned from this study is that the median earnings for a Detroiter with a bachelor’s degree was only $37,800, falling well below their suburban counterparts and their median earnings of $55,000 with the same level of education. Taking advantage of Detroit’s job growth so that everyone is participating must be a priority. The number of jobs in Detroit continues to rise, but workforce outcomes for people of color continues to lag. Intentional and inclusive job growth must be a part of Detroit’s economic strategy if we want economic conditions to improve. This includes not only access to higher-wage opportunities, but also clearer pathways for these jobs at all income levels. 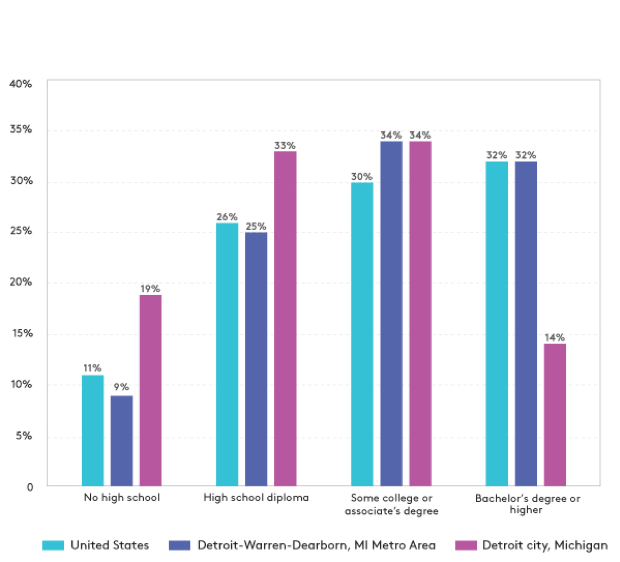 Comprehensive community development is key to advancing our neighborhoods.

We wholeheartedly believe that growing Detroit has to be based on an aspirational view of our city that offers economic opportunities for everyone. It is up to all of us, as urban policy-makers, planners, designers, researchers and practitioners to ask ourselves, “what will our city look like when we truly come back?”