Down Dudley: Designing the Resurrection of an Inner City Neighborhood

Gilad Rosenzweig is an architect and urban planner from Cambridge, MA. He is the Founder of Smarter in the City, a venture developing innovation districts in inner city neighborhoods.

Dutch Architect Francine Houben of Mecanoo Architecten seduced a standing-room-only audience at the Boston Architectural College this September, as she presented the new Dudley Square Municipal Building (designed by Mecanoo in collaboration with local firm Sasaki Associates.)  The building is only scheduled to open in January 2015, but this is already one of the most talked about structures in town.

The six-storey building is bold though sleek, refreshingly transparent yet also adorned with well detailed brick work. It is a mature piece of architectural design suitable for a modern art museum in a global city. But it is in fact located in one of the poorest neighborhoods of Boston.

Built and owned by the City of Boston, it will house the Boston Public School department (relocated from downtown), and provide additional leasable office space and ground floor retail.

The development is a dramatic mixture of old and new. Several century-old building facades were preserved on site, while the new edifice rises within and around them.

The current buzz in Dudley is that things are going to finally change. This neighborhood, in the shadow of downtown and the affluent Back Bay, is expected to join the success of other up and coming Boston sub-centers. The Mecanoo/Sasaki building may be the most iconic (and visible) example of this change, but a growing number of nearby mixed-use developments are also now under construction or in final permitting stages.

For many, if not most in Boston, it is hard to imagine that Dudley Square will reemerge as an urban center; few know that it once even was. And even today, with the Municipal Building halfway through construction, the neighborhood still suffers from high retail and office vacancy, empty lots and abandoned buildings. It is also home to high poverty and unemployment rates that are consistently well above average.

The Center of the Inner City

Dudley is the hub of Boston’s inner city; a poor, mostly African-American neighborhood sidelined by decades of errant planning directives and disinvestment typical to most US cities in the 20th century. It harbors an array of low socioeconomic metrics, is largely bereft of mid- and large-scale business, and has suffered severe damage to its urban form. Once a high density, transit-oriented, business and social mecca, by 1970 Dudley Square was left a shell of its former self.

Dudley is at the ‘lower’ end of the larger Roxbury neighborhood, and is often promoted as “the center of Boston” – geographically speaking at least. For most residents of the greater Boston area, however, Dudley is simply not on their map. Images (real or perceived) generated from a history of blight, poverty, and crime continue to permeate general perceptions of the neighborhood.

Dudley was once the “second downtown” of Boston – a convergence of subway and streetcar lines, and a major retail hub; as well as the heart of African-American culture in the city.

In Roxbury, a shopping expedition, or an evening out was once poetically referred to as going “Down Dudley” (Boston slang for “going to Dudley.”) The streets were full of shoppers, families, and strolling couples accompanied by the enticing smells of bakeries and soul food, and the sounds of music flowing out of jazz clubs and record stores.

With the large-scale suburbanization of the white population, and the growth of the black community (mostly from the latter part of the Great Migration) the demographic landscape of Roxbury quickly changed.

At first it thrived. The African-American community concentrated around Dudley Square – absorbing the beauty of its historic buildings and rich urban character. But then, just as in so many cities across the nation, a series of ill-fated planning efforts, combined with social and racial upheaval led to the demise of Dudley.

The black community expanded to Upper Roxbury and then neighboring Dorchester and Mattapan, as the white population (mostly Jewish) moved to the suburbs. In this internal migration, the poorest were left behind at Dudley.

In the late 1950s and throughout the 1960s, Boston joined (and to some degree led) the nation in a campaign of urban renewal. In Dudley, this led to the physical destruction of the neighborhood.

Blocks of mundane public housing buildings replaced historic rowhouses, abandoned or condemned buildings were demolished by the hundreds and a huge swath of land to the north and west of Dudley Square was clear-cut for new freeways. Bostonians revolted and stopped the construction of I-95 and the “inner belt” highway, but the demolition of hundreds of acres of former cityscape around Dudley was already complete.

Roxbury was essentially cut off from the rest of Boston by what looked like the cold war division of Berlin – just without the wall. Hundreds of empty garbage-strewn lots filled the landscape where classic Victorian apartment houses and businesses once stood. 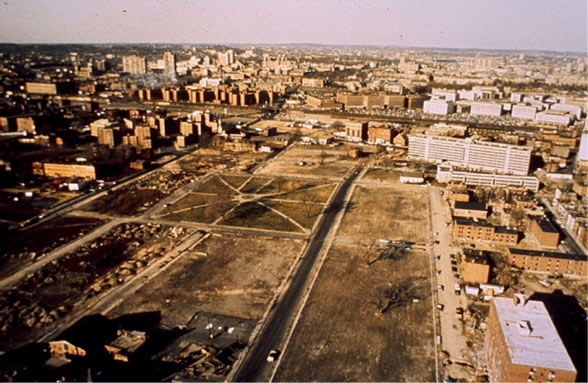 In the 1970s the abandonment of Roxbury continued as a deeply divided city essentially put Dudley off the map. Then, to make matters worse (though it was designed to make it better) the only mass transit line in Roxbury, the MBTA Orange Line, was removed. In 1987, the former “el” that roared above the streets of Dudley was relocated half a mile to the west (into the corridor cleared for the un-built I-95 freeway.)

At the time, a promise was made to regenerate Washington Street, the main thoroughfare running below the “el” and directly through Dudley Square. Liberated from decades of darkness and screeching overhead trains, plans for new development were tabled, and a new streetcar line proposed. But nothing came. The brighter streets had even fewer people than before. It would take another 20 years till the city would return to Dudley.

Design and the Inner City

Around the site of the new Municipal Building, dozens of stores and buildings remain vacant.  The hope is that with large-scale developments now underway, fortified with investment by the city and the private sector, Dudley Square will come back to life. 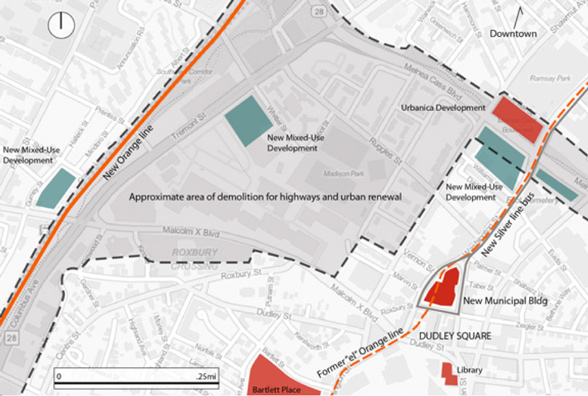 Map: Dudley Square and Lower Roxbury (by author on OpenStreetMap base)

The Dudley Square Municipal Building is a catalyst for change, through programming, investment and more importantly, by design. And now other architects, such as Utile and Urbanica are adding their touch to the neighborhood.

Also helping the revival, the city has since reinstated pseudo-rapid transit to Dudley in the form of the Silver Line BRT (yes, it is just a bus…,) and a fair amount of the demolished lots have now been rebuilt with townhouse style affordable housing, schools and community centers. Moreover,the remaining empty parcels are now the focus of large-scale mixed use development, such as the Urbanica project. 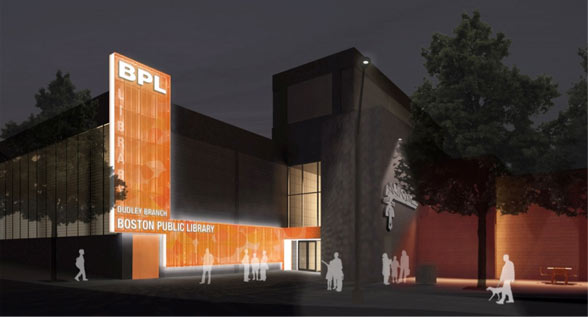 The Dudley Branch of the Boston Public Library, by Utile Architects. 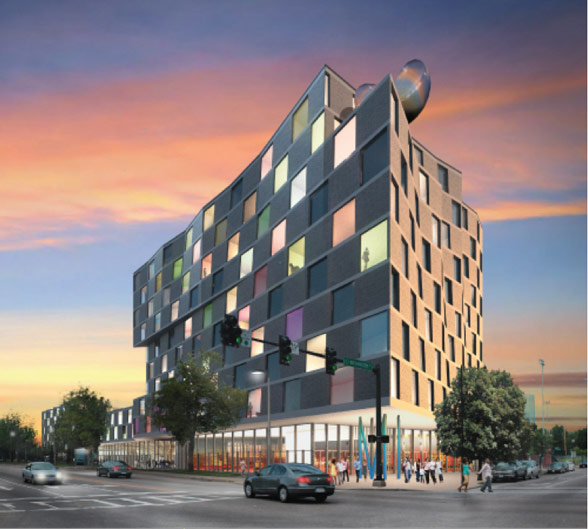 Is this ‘21st century urban renewal’ – where forward thinking, community-involved urban planning AND good design come together?! For it is not just the numerical addition of square feet and units that is required in the inner cities, but also the creation and preservation of high quality architecture.

How will avant-garde design located adjacent to the trendy (and well gentrified) South End neighborhood just north of Dudley withstand the forces of gentrification?  There are pundits who worry about recent “turnovers” in Brooklyn, or along U Street or Columbia Heights in Washington DC being replicated in Roxbury.

The main difference in Dudley is that the current series of developments are designed for the neighborhood and in some cases built “by” the neighborhood (three CDC-led developments are near groundbreaking including Bartlett Place.) They mostly include affordable housing, community and public services, but with an important inclusion of market-rate units and city-oriented business.

Major architectural and urban design improvements are reinvigorating Dudley Square.  The changes will benefit the local community and the entire city. “Going Down Dudley” may soon return to the lexicon of Roxbury, or better yet, to all of Boston.