Distributed Work in the Polycentric City

Philip Ross is founder and CEO of UnGroup – comprising UnWork.com and Unwired. He is an author, commentator and adviser on the future of work, the workplace and cities.

Our cities have historically been shaped by natural resources and human endeavour. 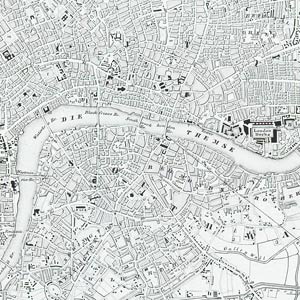 Old London and the River Thames
Click to enlarge

In London, for example, rivers and tributaries of the Thames shaped the urban plan.  The river Fleet’s valley became Farringdon Road and gave its name to Fleet Street. Marylebone Lane follows the twists and turns of the river Tyburn. Wells and springs shaped the ancient City such as Brook Street; location in an age where physical rivers de-marked boundaries and borders.  And man created civilisation on top of this ancient map. Roman roads followed river beds that are now buried deep below the modern city.  Utilities and transport networks overlaid this map to create the mix that we know today. Even modern, planned ‘grid’ cities have a resonance and rhythm, through zones, transport planning and repetitive certainty; a Mondrian approach to human habitation.

The infrastructure has always been about bringing people and goods into the city centre, and the radial pattern that most cities demonstrate creates a heart, a central business district where the commercial hub was found.  Districts, nodes and termini create a rhythm of use.

But can or does technology now challenge this norm?  Will the move from an analogue world to a digital one challenge the assumptions of city plan and the lives that people within it lead?

When Frances Cairncross wrote the ‘Death of Distance’ she predicted an era where distance would have no cost.  And so this has come to pass.  The city’s fundamental raison d’être is now being reconsidered.  Co-location is no longer the most efficient way to minimise costs for the corporation as technology allows people to connect and collaborate from anywhere.  Markets no longer require physical presence to trade and function.  Agglomeration has no purpose in a global economy.  Distributed work is challenging the nature of the metropolis.

Potable devices that are increasingly sophisticated and light, blistering wireless telephony and connectivity with 4G LTE and WiFi/WiGig, the cloud and SaaS as well as a host of other innovations are changing the nature of where, when and how work gets done for a large proportion of the population.  And at the same time that this agile workforce is changing the rules, a number of other forces are at play.

We have a perfect storm of ingredients to challenge our cities: population growth, transport constraints, carbon reduction and new technology.  Overlay the corporate desire to cut costs and a realization that offices are underutilized assets that can be shrunk to reflect the real demand for workspace and you have a scenario that has the potential to reshape our cities.

There is a growing realization that cities will eventually become immobile as a forecast 6bn people become city dwellers worldwide by 2050.  We will have to rethink patterns of use of the city.

And so the perfect storm presents the vision of a polycentric city where there is no centre or heart but a series of interconnected nodes – much like the internet.  City 2.0 will be a digital urban landscape, where people are connected with ubiquitous connectivity, no longer tied to the ancient meanders of rivers or termini or transport.

City 2.0 will redefine how we live, work, consume leisure and come together.  It will be a staccato city, no longer in motion but peaking and troughing as new patterns of behavior emerge.  Polycentricity will allow new clusters and communities, a new sense of localism and freedom to choose work settings away from the 9to5 commute that dominates today.

Already we have witnessed a dramatic growth in co-working space; new third spaces for work that are shared between like minded people – a return to the guilds and scoulas of ancient times.  Third space will begin to redefine destination in the city as people form new networks and clusters.

Moving bytes around the modern city is not just an iteration. We will slowly witness a transformation of our urban landscape as radical and impactful as that created on the back of the last industrial revolution.  The digital era will shape our cities and buildings and define a new set of behaviours. With it will come a new definition of the corporation, much like Charles Handy predicted… doughnut companies inhabiting a doughnut city.