Michael Mehaffy is Chair of the Future of Places Research Network, a new research coordination network based in Stockholm, Sweden, aimed at identifying and developing topics toward implementation of the New Urban Agenda, and with a particular focus on public space networks.

The great polymath Herbert Simon once defined design as “the transformation of existing states to preferred ones.”  There’s a lot packed into that elegant definition, and more questions than answers –  but they are the right questions.  Who is doing the preferring?  How do we know when we have achieved the preferred states? What are the existing states, and how do we understand them?  What is the transformation process, and how do we manage it?  What are the technologies, and how do we develop and apply them?

In the roughly five decades since Simon gave that definition, we know a lot more about the complex processes of cities, and how our designs transform them in preferred ways – or, too often, don’t.  As  another great polymath, the urbanist Jane Jacobs, noted around the same time, the first task is to understand “the kind of problem a city is.”  Yet as she argued, we have been stagnating in an old industrial way of looking at the world, neatly segregating it into functional packets.  This was not the way great cities worked, and trying to make them so was – still is –  producing devastating results.

There is a close connection to the topic of resilience, and the distinction made by C.H. Holling between “engineered resilience” – the designed ability to handle a controlled environment within the bounds of predictability – and “ecological resilience,” the ability to handle unpredictable shocks that can occur at any time in a chaotic, “far from equilibrium” world.  We are quite good at the former, but almost as a consequence, we are disastrously bad at the latter.  (The Fukushima tsunami and meltdown is a good case in point.)

A Web Way of Thinking

Jacobs went on to argue that we need a “web way of thinking” about cities – of understanding how a number of variables interact in a complex way within an urban system, and understanding how to manage them as part of that system.  This is probably a good way of summing up current investigations in  urban network science by researchers such as Geoffrey West and Luis Bettencourt of the Santa Fe Institute.  Indeed, West and Bettencourt openly express a debt to Jacobs, and her thinking about how important “externalities” occur within cities as a result of their network properties.

Jacobs pointed out that the most important agents of an urban system are the people themselves, who go about modifying and organizing bits of the city, thereby actually producing much of the structure of cities.  Through a process known as “self-organization,” these actions are able to produce, under the right conditions, remarkable forms of what Jacobs called “organized complexity.”  These emergent outcomes are what interest us as residents: economic vitality, urban liveliness, health and livability.

As we can see in other complex systems, the people of a city function as semi-autonomous agents, following generative rules – the laws, codes, regulations, incentives and disincentives.  These rules, and the models that they comprise, are rather like the “DNA” of the city, shaping its growth, for better or for worse, from a human point of view.  Changing this DNA can indeed change the growth – but it is less the case that we can make simple-minded changes to this complex DNA, and more that we need to let the DNA itself evolve, by employing strategic and catalytic interventions.  This is where we as urban technologists can play a key role. 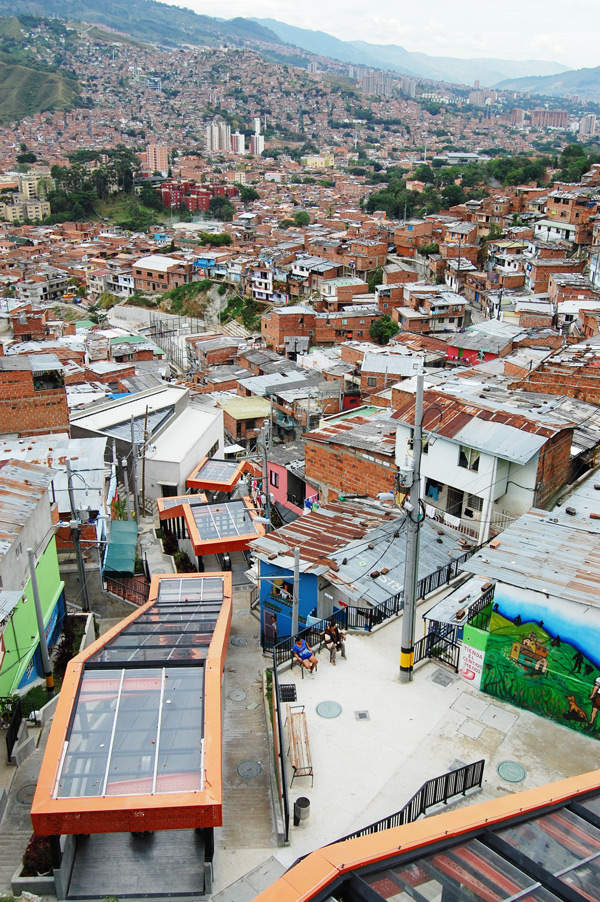 One intriguing way to do this is to make strategic top-down changes to certain areas of the city, so as to catalyze self-organizing growth around them.  Jacobs described the strategic use of public projects as “chess pieces” to trigger other “moves” by other “players” (agents) within a neighborhood.  Successful and fascinating examples of this – sometimes dubbed “urban acupuncture” – are in the bus rapid transit systems and other interventions of Curitiba, Brazil, and more recently, the escalators and libraries of Medellin, Colombia.  The catalytic growth around these projects is indeed fascinating – and, in a world of exploding informal settlements and other daunting urban challenges, a very hopeful sign of success.

Apart from these kinds of strategies, what new kinds of technologies are emerging to replace the failing top-down methods of a previous generation?  One very promising candidate, as I see it, comes from computer science:  the use of “design patterns” and “pattern languages,” design elements that function together within web-like structures.  They are ubiquitous in software today, powering Macs, iPhone apps, most games, and many other systems.  Pattern languages are, I would suggest, examples of a “web way of thinking” in action.

The story of their development is a fascinating one – not a product of computer science, but of the discipline of city and building design.  Around the same time as Jacobs and Simon, the design theorist Christopher Alexander wrote a landmark book, Notes on the Synthesis of Form, arguing that the structure of a good architectural or urban solution tends to take the repeatable form of a web-like cluster or “pattern.”  We had to be careful, Alexander said, not to mistake these complex patterns for the rigid tree-like solutions of an older mechanical logic, in a clear echo of Jacobs.  His paper “A city is not a tree” became a landmark among city planners – but arguably, not enough has changed.

Alexander’s 1977 classic A Pattern Language is still a best-seller, used by designers in architecture, urban planning, software and dozens of other fields.  Richly illustrated, the book evokes the pattern-like quality of the buildings and spaces within great cities like Paris and London. But the very success of the book may obscure the deeper logic of pattern languages, and their ability to serve as a promising new class of design technology for self-organization.

One person who has always seen this connection is the software pioneer Ward Cunningham, inventor of wiki, and a key leader in development of software patterns, Agile, Extreme Programming and other landmarks in the field.  In fact, Cunningham says, wiki was created as a tool to collect and share patterns and pattern languages.  More deeply, as he explains it, there is a fundamental connection to the very logic of pattern languages.  People collaborate in wiki (and in classic examples like Wikipedia) to grow the web of elements, and evolve them into a smarter and smarter self-organizing structure.  In effect, he says, wiki is a pattern language system.

Cunningham is now developing a new generation of wiki, capable of managing data and data interactions between pages.  This system, called “Smallest Federated Wiki,” has the capability to develop pattern language networks that can model, manage and operate with data.  This author is privileged to be able to participate in this exciting research and development of new design technology, exploring specific applications to cities.

For example: can we model greenhouse gas emissions, as they are affected by urban form?  Can we develop alternative scenarios, and explore the impacts of such externalities?  Might these in turn point to strategies to “monetize” or otherwise transmit those externalities to the current “operating system,” also operationalized by patterns – thus facilitating a self-organization process to improve the outcome?  These are all fascinating and, we think, exciting prospects.

Perhaps more important, this is a frontier of “design for self-organization”  which only seems like a contradiction in terms.  In fact it gets back to Simon’s original definition of design as transformation – allowing us to efficiently explore and manage the autocatalytic pathways between the existing and the preferred.