Nir Buras is a seasoned architect with extensive design and construction experience in the fields of architecture, strategic planning and urban design, program and cost control, and environmental sustainability of a multitude of significant and complex projects including Transit, Aviation, Historic Restoration, Commercial, institutional and Civic. He has worked in North America and the Middle East, including on Grand Central Terminal, New York; International Terminal D, Dallas-Fort-Worth; the Washington DC Metro Silver Line extension to Dulles Airport; the Tel-Aviv Metro; and the US Capitol, the Senate and House Office Buildings in Washington. Professional and community contributions include leading the visionary Anacostia River Plan, organizing the Washington Chapter of the Institute of Classical Architecture and Arts and founding the internet startup QTECT. Dr. Buras holds an MArch degree from UCLA and a PhD from the Technion. "The way we make cities is broken and needs constant innovation to fix it," he says. "Common sense is my compass and Reason my North Star."

Since World War Two, urban planning and architecture has destroyed more good, urban fabric than the war itself.  Architects, planners, artists, and cultural leaders wholeheartedly believed in “Less Is More”, “Form Follows Function”, “Architecture of Our Times”, and “Progressive Urbanism” as Truth. The world to them was a tabula rasa. They denied the idea of directly applying something that had worked in the past. 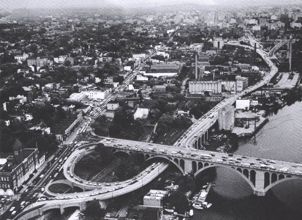 Modern architects and planners insist that developing modern cities and buildings is nothing like what came before. They speak of “FAR” and “density,” of “neighborhoods,” “walkability,” and of “sustainability,” of “Transit Oriented Design,” and lots of bicycles. But even when done to the highest level, none creates as fine an urban experience as what came before.

Purging the profession of previous modes of planning, the baby was thrown out with the bathwater. The drops remaining in the tub were entrusted to urban morticians, a.k.a. “preservationists.” 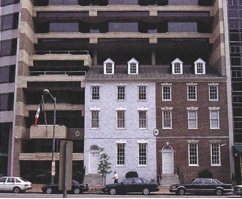 Nearly all modern plans have failed[1], are currently failing, or will do so in our lifetime. It is clear that modern planning has a fatal flaw.

In an attempt to protect itself from more decimated cities and sprawl, society put in place Zoning, Regulations and Laws of unprecedented volume and complexity. Newer Urbanisms and Leadership programs offer even more codes, and more complexity. The machine now drives itself. Washington DC enacted a new code without the benefit of having designed a plan for it. New Urbanism adds to the code shelf a 600-page “From Based Code”. For substantial additional costs and largely unproven benefit, you can do a Green project.

Amnesia in the Service of Progress

Having, in the name of “progress,” eradicated from the profession the knowledge base of those who came before, planners do not have at their disposal the urban literacy that had evolved over the last 5,000 years. Out of thin air they created solutions to problems that for millennia had been resolved and in doing so created new problems. Where planning failed, the myth of expertise expanded – and the fields of expertise grew increasingly narrow and disjointed. 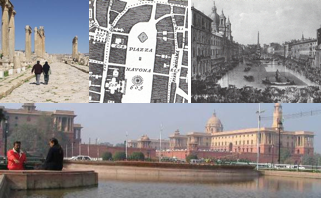 Today, the greatest team of specialists cannot create as magical an environment as an Italian hilltown or an 18th century downtown. Indeed, specialist segregation of information makes interdisciplinary work difficult if not impossible.

Why Reinvent the Wheel?

For purposes of definition, the classical approach includes all traditional styles of the west and most non-western styles. All emanate fundamentally from classical-type principles.

Like writing and musical notes, classic planning is simple enough to be taught to a child. But without an orchestra knowing to read notes, we would never hear Beethoven. 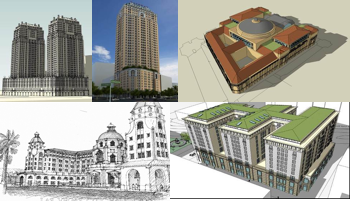 The simplicity of Classic Planning and design is stunning. The full range of its principles can be easily mastered by anyone with a high school physics education. It is based on the universal, intuitive sense of place, a survival tool, and stands on three simple notions: 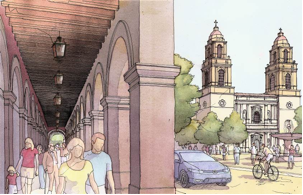 We experience beauty individually, non-intellectually, in a direct linked to individual well-being. Regardless of race, a beautiful individual is beautiful to all. Being universal, the experience of beauty is neither subjective nor dependent on culture.

When unpenalized, people choose beautiful places over others. Beautiful places are therefore functional and economical. People maintain them for generations, which makes them fundamentally sustainable.

Beautiful spaces are beautiful regardless of their date of construction. That we build ugly buildings and spaces expressing “our time” means simply that we consider our time ugly and harsh.

Moreover, users of beautiful places seem generally less prone to aggression and less easy to victimize.[2] This makes such places safer and calming. The well-being they engender encourages tolerance and respect among individuals. 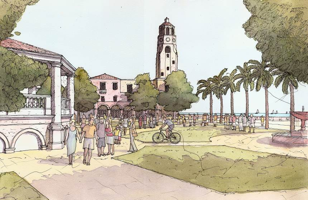 Being based on the stability of humanistic values, Classic Planning takes, minimally, the 100 year perspective, 500 for infrastructure.

Every place has its spirit and precedents. In Washington DC the Urban DNA is the L’Enfant Plan and the McMillan Commission’s proposals and interpretation of that Plan provide continued guidance to the development of the City.

To withstand the test of time, design at any scale is judged on:

Decide upon a plan’s motif, theme, or driving design feature. With the least acrobatics go full-tilt on the “main event.” Be consistent thereafter.

Invention is not creating something from nothing, but rather the application of a precedent from one context to another. By applying a precedent you attain all its inherent holistic values including those that were the motivation for it in the first place. If a precedent works, use it, copy, imitate. 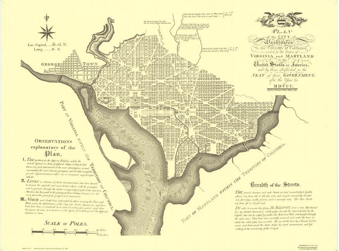 For an urban plan, a precedent operates like a score or script. The notes are the same but a difference in values will create different tones and results.

Now elevate and detail the fabric in appropriate styles. Adjust the design to the right beauty scale. Use modified traditional infrastructure engineering and construction techniques. Use common sense to judge results. Every aspect must be judged on Firmness, Commodity, Delight. When in doubt, return to the beauty scale.

Every location has its challenges. Goals defined for the Anacostia project in Washington DC included: 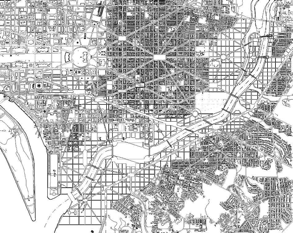 Capture the Sense of Place

When it comes to human settlement there aren’t that many choices with regard to its boundaries and approaches. Defining and limiting towns creates “place”. 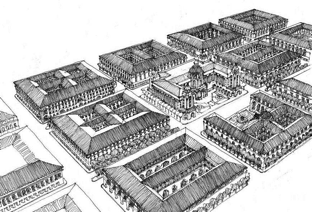 Classic Planning relies on Common-Sense. Cities are the most complex systems but if a plan is overly complex, it won’t work. It is easiest to divide land by using right angles. 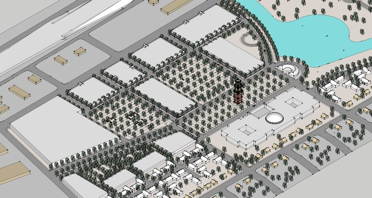 Avoidance of “formality” will not produce the “natural”. 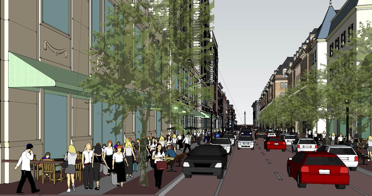 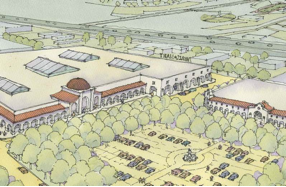 I think you get the drift.

If boulevards are the city’s arteries and streets its blood vessels, transportation systems, water, power, sewer, and data are the city’s digestive and nervous systems. There is no civic life whatsoever if they don’t operate well and have capacity for radical change in the long run. Oversize everything and build it right. Repair local infrastructure including sewer and water lines for the next 100 years’ service. 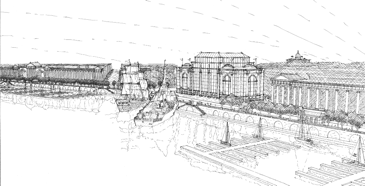 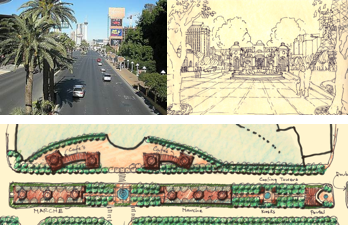 Las Vegas Boulevard as it is and as it will be 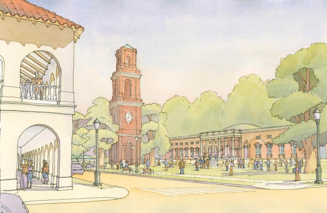 Classic Planning focuses on the essence of place and design, based on a regulatory framework that supports opportunities for real place making. Minimize the planning office.  Minimize by-laws, zoning and regulations. Spend money on bricks, not bureaucrats. 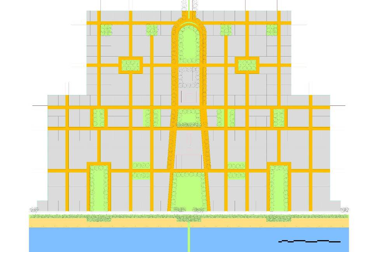 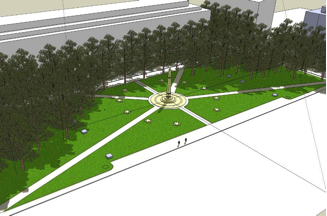 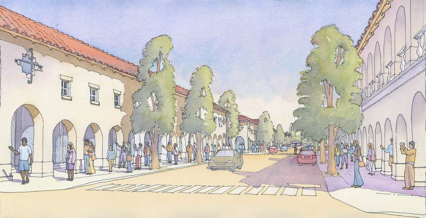 You can be “cool” and accept glamorous, “high-tech” walls of sterile glass along barren, unused sidewalks. You can accept ridiculously wide roads and being dependent on cars as natural, inevitable even desirable. Or you can understand that the way humans feel and behave hasn’t changed much over time.

Do you want to make a difference in your community or do you want more bureaucracy, codes and failure? Classic Planning methods