Jonathan Fink is Professor of Geology at Portland State University and Visiting Professor of Urban Analytics at University of British Columbia. As VP for research and sustainability institute director at both Arizona State and Portland State Universities, he has promoted technology-enabled approaches to regional economic development and urban sustainability.

A central premise of Meeting of the Minds is that the flexibility, practicality, and focus of municipal governments make them ideal technological and social innovators. But can the ingenuity of U.S. cities be sufficiently amplified to effectively keep up with the pace of climate change, especially in the face of declining federal leadership?

Answering this question requires us to find the most effective scales for replicating urban progress. Metropolitan to regional scale programs can have the greatest impact, while household to district level projects are easiest to implement (Figure 1). Well-functioning cities and their staffs can help society achieve ambitious goals like reversing climate change and relieving global poverty, but that’s not what they are primarily paid to do. Instead, individual cities mostly aim their problem solving at local conditions. Fixing a pothole or increasing bus frequency can bring immediate relief to a neighborhood and kudos to a city council member.

Organizations like ICLEI and the US Conference of Mayors have long facilitated the sharing of these operational insights. As urban environmental issues have become more prominent, groups like the Urban Sustainability Directors’ Network and Rockefeller Foundation’s 100 Resilient Cities have become more influential. With the advent of smart technology as an urban focus, new groups like MetroLab Network, Global City Teams Challenge, and the World Council on City Data are now emerging.

These networks help all member cities learn from one another. However, there are added benefits that come from comparisons with adjacent centers that share geographic, climatic, political, or cultural characteristics, either within a single metropolitan area or across nearby metros. Just as with scientific experiments, holding most policy variables constant, as is possible when looking at a set of like-minded cities, allows one to better understand the detailed effects of individual factors.

Forging links across neighboring metros requires a higher level of voluntary coordination, because there is rarely any government organization with overarching jurisdiction. In the 1990s and 2000s, regional planners began focusing on “megapolitan” regions, or “Megaregions,” most of which contain two or more metropolitan areas linked by relatively efficient transportation systems. The best known of these is the Boston-New York-Washington “Megalopolis,” but others in the U.S. include the Great Lakes complex centered on Chicago, the “Sun Corridor” between Phoenix and Tucson, and Florida’s I-4 corridor connecting Tampa, Orlando, and Miami. Figure 2 shows the Regional Plan Association’s representation of eleven megapolitans that contained 70% of the U.S. population in less than 20% of the land area in 2008. 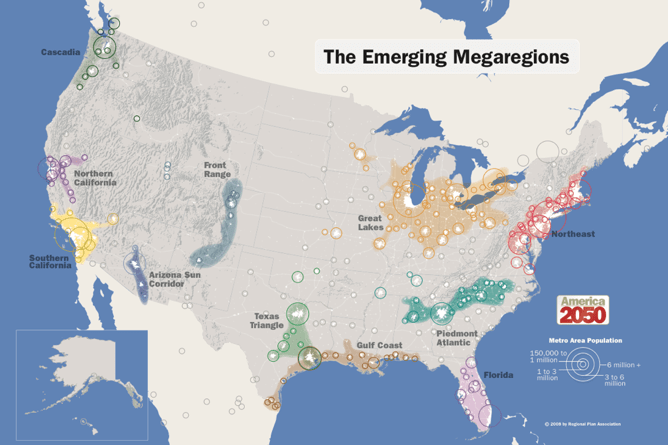 Figure 2. One of many possible Megapolitan representations for the U.S. (Regional Plan Association, 2008)

The Cascadia Corridor is a 600 kilometer region that includes three metropolitan areas in the northwest United States and southwest Canada, which share many common traits (Figure 3). Because of the combined technological sophistication and social awareness of municipal, corporate, and academic organizations in Portland, Seattle, and Vancouver; Cascadia is an ideal place to explore the benefits that come from accelerating the exchange of smart innovation on a region-wide basis.

Among North American megapolitans, Cascadia is one of the most uniform, and certainly the “greenest.” The region boasts abundant natural resources, nearly carbon-free power generation, four-season recreation, high educational attainment, tech innovativeness, progressive politics, and rich entrepreneurial ecosystems. At the same time, it is challenged by a history of racial intolerance (at least in the U.S. portion), limited venture capital, insufficient affordable housing, and steadily worsening traffic. The Sword of Damocles hanging over the region is the Cascadia subduction zone, where a Magnitude 9 earthquake is overdue; much of the region’s population and their governments remain under-prepared.

Despite all of these parallels, the region’s three metros also have distinct differences, making them an even better laboratory for evaluating the benefits and drawbacks of regional coordination. Portland is the quirkiest, with a strong neighborhood ethos, DIY culture, and longstanding climate change leadership. Its corporate landscape is dominated by two sectors: athletic and outdoor, anchored by Nike, and high-end electronics, built around Intel. Academically, it hosts an accessible, urban-serving university (Portland State); a nationally ranked medical school (Oregon Health and Science University); and specialized outposts of the state’s flagship (University of Oregon) and land-grant (Oregon State) universities.

Seattle is the corporate powerhouse of the three, reflecting the longtime influence of companies like Microsoft, Amazon, and Boeing. It is currently undergoing a massive building boom, typified by Amazon’s expansion in the South Lake Union district, and complemented by major, if long overdue, upgrades to the region’s transportation network. Thanks to Microsoft and Amazon, Seattle is known as the home of cloud computing. The city has very strong cultural and economic ties to Asia. The University of Washington (UW), one of the world’s top research universities, has an outsized influence, although historically it has been focused more outside the region than internally.

Vancouver is the western gateway to Canada, with a breathtaking location, major port, and powerful demographic and financial links to Asia. Overshadowed domestically by Toronto, it lacks the dominant corporate players of Seattle and Portland. However, it hosts large and growing bases for U.S. tech companies including Microsoft, Amazon, and Google, allowing them to tap into global talent pools with fewer immigration hassles. Within the tech sector, Vancouver is becoming known as a hub for augmented and virtual reality. Higher education is dominated by University of British Columbia (UBC) and Simon Fraser University.

In 2016, against this promising backdrop, several large players in Seattle and Vancouver organized the first “Cascadia Innovation Corridor” conference to promote the vision that with proper infrastructure investments and more intentional exchange of people and ideas, the region could become a global leader in green, smart, and healthy economic development. Long-dormant plans for high speed rail were dusted off, coupled with newer notions about autonomous vehicle lanes on I-5, and even a Hyperloop, all aimed at reducing downtown-to-downtown travel times to an hour or less.

At the second Cascadia Corridor Summit, in September 2017, the Canadian Consulate of Seattle launched a regional technology transfer and business incubation consortium, which includes Portland. The State of Washington and Microsoft agreed to fund a new assessment of high speed rail between Seattle and Vancouver. In addition, a new “Nerd Bird” seaplane service was announced to connect South Lake Union with downtown Vancouver.

Recognizing that most of the world’s tech corridors are built around the innovation coming from two or more collaborating research universities, Microsoft has been funding enhanced connectivity between UW and UBC through the Cascadia Urban Analytics Cooperative. The schools are now using this framework to actively expand research links in transportation, housing, public health, genomics, and law, as well as growing parallel training programs in “Data Science for Social Good.”

In 2018 and beyond, several avenues hold promise for demonstrating how Cascadia can become a model for smart, corridor-scale development. The largest benefits can come from deploying the same technologies in three similar yet different settings. For example: 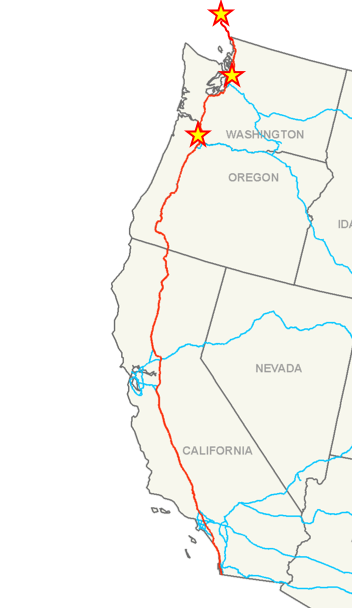 Figure 4. Freight traffic from Mexico to Canada is bottlenecked in Portland and Seattle. Congestion pricing could speed up the whole system while also reducing commuter traffic. Map (Nick Nolte 2006) showing I-5 and BC-99 in red; stars represent Portland, Seattle, and Vancouver.

When our current cities, states, and provinces were established, “digital technology” meant counting on one’s fingers. Political boundaries made more sense than they do today. Now, with near-universal access to all types of data, regions of like-minded people, companies, and governments can form, dissolve, and reassemble for different purposes, just as online communities can shape and redefine personal identities.

A fascinating example is the “define one’s own city boundaries” exercise developed by geographers in the U.S. and U.K (thanks to Garrett Nelson from Dartmouth). Residents of an urban region are asked to draw an outline on an online map of what “their” version of their city includes; the crowd-sourced information is then integrated to show what the collective vision of the region is.

The use of technology to enable the emergence of metro-based regionalism—whether in Cascadia, in London, or in the Pearl River Delta—represents a critical next step in allowing cities to help tackle the most vexing problems facing society today.