Buzzing Rooftops: The Ins and Outs of Urban Beekeeping

In the springtime in Provence, France, the countryside explodes with plush, fluffy looking purple fields. It’s lavender season. Even more miraculous than the aroma of sweet lavender is the sound coming from the fields – they actually buzz with honeybees.  When the first taste of lavender honey hit my lips was about the time that my fascination with honeybees and beekeeping began.

Bees on the Rise 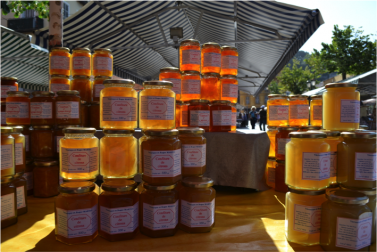 Urban Beekeeping has been on the rise over the past decade. Some reasons for this trend include: the coining of Colony Collapse Disorder (CCD) in 2006 and subsequent efforts to combat it, Michelle Obama placing beehives on the White House lawn in 2009, the legalization of urban beekeeping in New York City in 2010, and the growth of the Local Food Movement.

In cities around the globe, urban beekeeping is gaining popularity as a local method of honey production. The Greater London Area has seen a three-fold increase in the number of beekeepers since 2008, with the UK’s National Bee Unit Database tallying 1,237 beekeepers and over 3,500 hives in 2013. A New York Times article highlights the San Francisco Beekeeper’s Association increasing from about 50 SF beekeepers in 2000 to over 400 in 2010. With this rapid increase in urban beehives, scientists are questioning whether or not urban beekeeping is actually a good thing.

The “Sweet Spot” of Urban Beekeeping 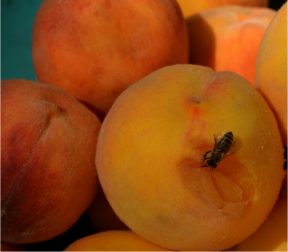 A recent study published in The Biologist argues that urban beekeeping has gone too far. Scientists Alton and Ratnieks have found that in London, there are now 25 beehives per square mile of city. Without enough flowers to support a population this size, city bees end up famished. The scientists advise that those looking to help the honeybee population should plant bee friendly flowers instead of managing a hive. In the United States, most cities have enough flowers to support the growing numbers of urban apiarists. However, an uptick in urban beekeeping does mean increasing the population density of one species. This inevitably tips the natural balance of the ecosystem and other factors, such as food supply for bees, need to be considered.

On the other hand, urban beekeeping practices in Paris are supporting healthier hives compared to collapsing colonies in rural areas. Urban areas are generally pesticide-free and have a greater variety of flowers compared to monoculture farms that dominate rural landscapes. Additionally, gardens in urban areas are designed to flower all year round, providing a constant food source for bees. 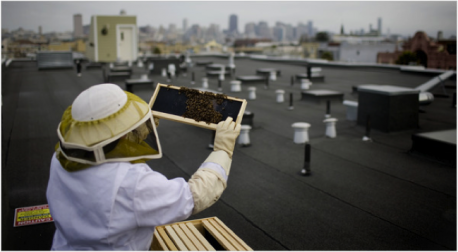 In an NBC News article, Henri Clement, the president of the National Union of French Beekeepers, states that urban bees in Paris are producing as much as 5 times the amount of honey as rural bees. The death rate of urban colonies is 3 to 5 percent in Paris, whereas in the country, the death rate of colonies is 30 to 40 percent. With no pesticides in the pollen and greater biodiversity of flowers, cities are counter-intuitively better able to support honeybees than rural landscapes.

Back in San Francisco, I had the opportunity to shadow an urban beekeeper in the sunny hills of Noe Valley.  Our faces covered by nets and smoker in hand, we set out to do hive maintenance. The five hives were positioned in this beekeeper’s back garden with clear flight paths, so the bees don’t end up flying into neighbors’ windows (a requirement in city settings).  Honeybees generally tend to fly within a two-mile radius for food. With no shortage of flowers in sight, his hives were dripping with honey. As a member of the SF Beekeeping Association, he will often get calls about hives that have been “rescued” from buildings and are looking for a home, a more sustainable alternative to calling the exterminator. 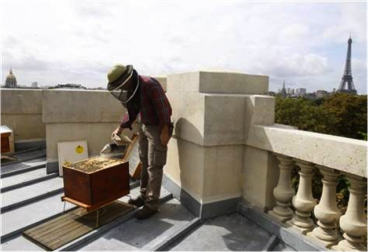 Urban beekeeping is a way to reconnect with the natural world that we urbanites have become so separate from. The above-mentioned study from the Biologist, warning against urban beekeeping, has received much press. However, since the study is geographically specific, it should not deter urban dwellers from taking up beekeeping, as long as they consider the larger ecosystem. Urban beekeeping is a way to make urban habitats more habitable. It is a way for city dwellers to actively create the environment they want to live in. An environment that supports beekeeping means more green space, more perennial flowering plants, and the buzzing sound of a healthy bee population, just like the lavender fields of Provence.