“Often the most holistic ideas come from places with fewer resources, where people think about how technology and media can support solutions rooted in their communities” – Diana Nucera, Detroit Community Technology Project

We are only starting to understand the power of networked technologies. And our learning comes at a cost: we are increasingly divided in our increasingly interconnected world. The internet has become balkanized: we absorb information in echo chambers of affinity and animosity, and argue over whose reality will rule the day. The power of algorithms amplifies the most divisive rhetoric, which is often the least anchored in truth and the public interest. Meanwhile, bad actors with digital privilege prey upon this unhealthy digital ecosystem, exploiting the uninitiated.

As someone who has fought for years to connect the unconnected, I am increasingly ambivalent about hyper-connectivity, the Internet of Things, smart devices and intelligent objects. We seem to be inadvertently creating a dystopian future with our technologies. We’ve already seen pervasive flaws, weaknesses, and attacks on smart devices, with no real plan for regulating them to protect safety and security, especially at the global level. Moreover, even when these technologies work as intended, they extract our personal data and make it possible to put our most private selves up for sale or capture.

I fear that in digital space, we focus on fractious and hyper-mediated national debates at the cost of what’s right in front of us: time with family, loved ones, neighbors; everything that sociologists like Robert Sampson and Eric Klinenberg have shown makes our communities stronger and more resilient to shocks and disasters.

So how can we reimagine and rebuild our relationship to technology to rebuild our communities of trust, even as social and political forces work against building unity and safety through ethical applications of technology? This work is increasingly important as the media and communications industries become more consolidated; as regulations are rolled back and consumer protections eroded; and as poorer communities, with less access to information and technology, have less access to meaningful employment.

As I write this, a furor has arisen over the New York Times’ decision to hire a new opinion writer who expresses skepticism about climate change, perhaps the most polarizing and emotional issue of our time. Climate change is an existential question wrapped in politically hyper-charged dialogue. Is it “anti-human” or “anti-growth” to advocate for taking measures against a grave threat that we don’t fully understand? Are we sitting by as disaster capitalists hoard water and profit from a new abundance of natural disasters?

This is not just a matter of intellectual debate or abstractions. Many coastal communities are experiencing “daylight flooding,” or in other words, they are sinking. People who live in housing projects built in flood zones, people who live in floodplains near refining facilities or other toxic sites, people who simply live in seaside communities — even in the most expensive real-estate markets — are seeing increasing insurance rates and sinking property values. And in America, nothing validates legal rhetoric like a property rights argument.

Managed or strategic retreat from coastal communities is a reality in a place like New York City, where home and business owners, along with local government, have learned the hard way about what happens after a natural disaster. And as the national discourse grinds on in its information warfare trenches, people have to prepare and adapt, since it seems we’ll never find the national unity to develop reasonable climate policies.

Building the Infrastructure for Resilience 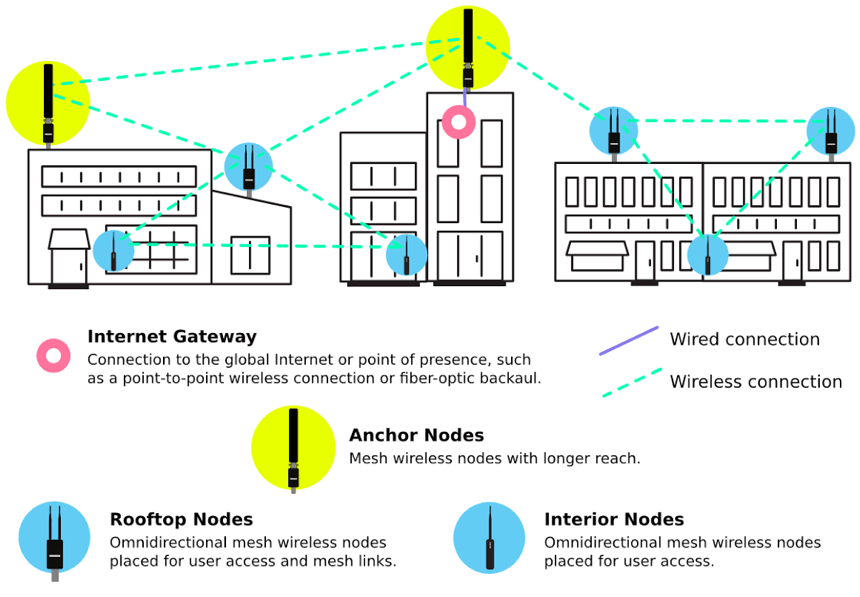 When telecommunications systems are functioning normally, these public WiFi networks will provide access to the internet. Because commercial networks often fail in emergencies, however, the networks also feature redundant connections, local hosting, and backup power systems. This design will allow the networks to function as response and resilience organizing platforms in emergencies, enabling community-based organizations to communicate with each other, with local residents, and with first responders, even when other systems fail.

This work emerges from New America’s community technology partnerships with organizations in Detroit, New York, and around the world since 2011. To pilot and refine a curriculum and training approach, we have worked closely with Diana Nucera and the Detroit Community Technology Project since 2011. We field tested this approach in partnership with Brooklyn’s Red Hook initiative in 2012, supporting the development of a mesh network there that served as a lifeline after Sandy, even throughout a two-week communications system outage in the neighborhood.

Based on our Red Hook case study, we are now working in our six partner NYC communities to train local residents as Digital Stewards to design, organize, and build local wireless networks as a support layer for the digital and social infrastructure of resilience. While the networks will bring storm-hardened broadband connections to local small businesses, they will also provide a platform for training residents to install, maintain, and leverage wireless communications infrastructure for preparedness and other locally-defined community goals. Day-to-day, the networks will also provide wireless hotspots at small business sites, increasing digital access in low-income neighborhoods, drawing foot traffic, and bringing life to the streets.

We see this project as a way of leveraging broadband technology to ​build the ​physical infrastructure needed to create healthy ​digital​ public spaces. Technology built by and for communities themselves to address local challenges can reduce social isolation and build community relationships and cohesion. While much investment in technology for preparedness and emergency management—surveillance systems and security checkpoints, for example—have not sown trust, but have fractured critical social relationships, we hope our work will contribute to building relationships of mutual trust among neighbors.

The potential uses for local mesh networks are endless — beyond emergency response, they can be used as hyperlocal information and news ecosystems, storehouses for locally managed privacy-protected data, platforms for cooperative businesses and platform services, and a forum for local advocacy. In fact, they suggest a different kind of future for the internet: one that is rooted in community trust, norms, and needs.

Resilient Networks NYC addresses the interrelated issues increasingly facing many marginalized communities in American cities, including the impact of climate change, limited technology access and ownership, decreasing public investment, concerns around digital privacy and data stewardship, and a need for training and employment opportunities. After Sandy, many New York neighborhoods forged new alliances or built relationships in a spirit of collaboration and mutual support. Our work seeks to build upon that spirit by adding infrastructure assets to increase preparedness and deepen community ties.