By Peter Engelke and Alex Paul

Peter Engelke is a senior fellow in the Foresight, Strategy, and Risks Initiative of Brent Scowcroft Center on International Security at the Atlantic Council, a Washington, DC based think-tank. His research focuses on how global trends, like urbanization and globalization, are shifting the global governance challenge for foreign and security policymakers.

Alex Paul is a Program Assistant in the Adrienne Arsht Center for Resilience, also at the Atlantic Council. He is interested in the increasing role of non-state actors in global governance. His masters’ thesis focuses on the role of mayors in international relations. 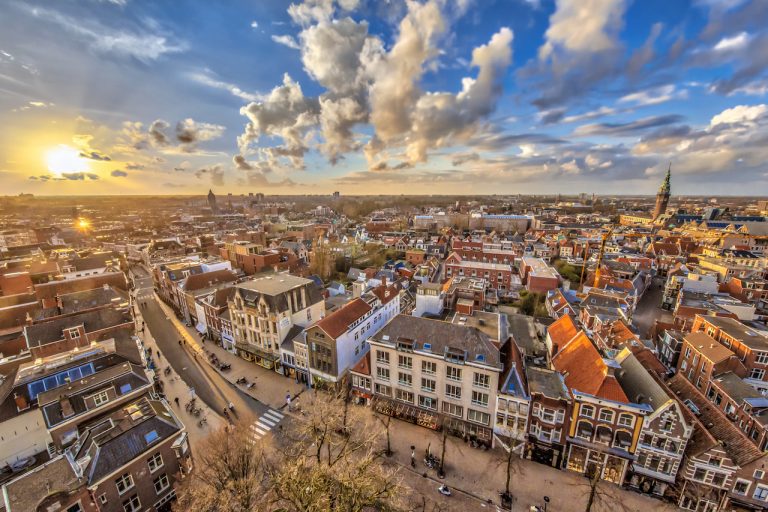 The passing last month of visionary thinker Dr. Benjamin Barber occurred during a difficult stretch for democracy, the topic that animated Barber the most during his long career. A passionate advocate for democracy, Barber devoted his life to empowering citizens for democratic self-governance. He was convinced that it offered the best possible form of government for societies and the world.

It was in this spirit that Barber wrestled with the democratic implications of two of the defining phenomena of our times: globalization and urbanization.

Jihad vs. McWorld, the 1995 book which made Barber famous, acknowledged globalization’s virtues but also assaulted its flaws. In an earlier essay that presaged his book, Barber wrote that globalization might create efficiencies, spread wealth, and knit the world more closely together. But he also argued that globalization is no substitute for democracy, which “grows from the bottom up and cannot be imposed from the top down.”

This insight was central to Barber’s later focus on urbanization. Barber believed cities could become a counterweight to globalization through the kind of bottom-up citizenship that he championed. This faith in an urban-centric democratic cosmopolitanism was the rationale behind his latest books, If Mayors Ruled the World and Cool Cities (published the same day he died).

Barber thought that cities could lead a global democratic renaissance. Unlike nation-states, which jealously guard their sovereignty, Barber believed that city residents and their leaders have a natural inclination toward practical and cooperative solutions to big challenges. He therefore thought that mayors could provide fresh and democratic leadership on global problems ranging from climate change to terrorism.

A Global Parliament of Mayors

Barber’s contributions will be missed all the greater because he was more than a fascinating theorist; he put his ideas into practice, as the charismatic driving force behind the Global Parliament of Mayors (GPM). Launched in the Netherlands last September, GPM realizes Barber’s thinking: if cities are bastions of democracy, then cities need to become a more organized force at the global level. GPM advances this cause by giving cities as diverse as Athens, Buenos Aires, Oklahoma City, Rabat, and Seoul a platform on which their leaders can more easily connect, find practical solutions to common problems, and turn their collective ambition into independent action on the world stage.

To live up to Barber’s vision, there are three complementary ways forward

Cities should continue to throw their considerable soft power weight behind transnational municipal networks like the GPM. The GPM – and similar networks like C40 and ICLEI – enable mayors, as elected officials, to participate in high-level international processes. Through them, cities are given more formal voice within interstate forums such as the UN climate negotiations.

At the same time, these networks also facilitate cities’ entrepreneurialism. Through their participation in network summits and bilateral discussions, mayors and city officials learn about practical, low-cost solutions to their own problems.

From popular bikeshare schemes, now in nearly 1200 metropolises globally, to participatory budgeting – an idea from Porto Alegre in Brazil – these ideas disseminate more rapidly and widely thanks to city networks, improving the quality of life for countless people worldwide.

Two: help their siblings out

The world’s biggest cities, especially in the global north, bear a special responsibility to be at the forefront of these efforts. As is true of the largest and wealthiest states, these cities have the resources, visibility, and favorable positioning to lead and to attract global attention. The largest members of networks like the GPM should redouble their efforts to support smaller and poorer cities, especially in the world’s fastest-growing regions such as South Asia and Africa, to ensure that they are both given voice at global level and can develop in a sustainable and democratic fashion.

Cities must recognize states as partners, not opponents, and get states to embrace cities’ work at a global level. Barber’s visionary ideal about urban cosmopolitanism notwithstanding, few believe that nation-states will disappear anytime soon.

When states do their work well, they enable cities to function, innovate, and craft new policies.  For example, cities do not have to concern themselves with high politics, especially international conflict and warfare. States also do a host of other things that cities do not have to do, whether crafting intellectual property laws or building intercity infrastructure.

For cities to become more important in international affairs, their aim should be to work alongside states when they can. Indeed, the interests of cities and states should align frequently, as when London and Paris find themselves on the front lines of terrorism. Nevertheless, it will be time to fight, and fight smartly, in those cases where interests clash, as when cities across the United States vow to continue reducing their climate emissions regardless of the current administration’s wishes.

A revolution in global governance

Achieving these goals will not be easy. Per Barber’s work, states are indeed reluctant to relinquish power, and cities are going to face a slog to be taken seriously by states in international affairs. Global intercity networks therefore will have to compete for funding, standing, and relevance.

But it is only right and fitting that if we are to ensure an appropriate legacy for Benjamin Barber, then we should aim for nothing less than a revolution in global governance during this century, and bring cities to the fore.

The Forging Freedom Portal is a one-stop shop where a police officer planning a victim-centered operation can connect with their law enforcement counterparts, and the right service providers ahead of time, collaborating to make sure they’re planning for the language skills, social services, and legal support that victims may need. The portal is a place where the people who care most about ending human trafficking, who are doing the hard work every day on the ground, can learn from each other and share best practices to raise the collective standard of this work.

Balancing Mobility and Safety at Intersections

Maximizing both the mobility and safety of road users at urban and suburban intersections is of utmost importance to city leaders and citizens today. Trends such as micromobility, connected and automated vehicles, and an explosion of available data, coupled with increasing numbers of bikes and pedestrians on our streets, result in both challenges and opportunities.

The increasing ability to provide intersection connectivity, edge computing and cloud storage, along with growing tool sets, such as Signal Performance Measures (SPM) and advanced video detection, provide new and exciting opportunities to traffic engineers. Possible combinations of Vision Zero intersection solutions, Near-Miss analyses, and the ability to make real-time operating decisions at our intersections can be overwhelming. Still, they must be embraced to ensure public officials are accountable to the traveling public.

How Cities are Using the Cloud to Adapt to the Pandemic

I caught up with Joe Bergera – CEO of Iteris – recently and we discussed a cloud-first strategy for cities and the benefits, particularly during the pandemic. Organizations, cities and companies that have replicated some of their business processes in the cloud have navigated the pandemic quite well. We discuss why that is, and what can be done to help other cities during this time.