Aleksi Neuvonen is the co-founder and head of research at the Nordic think tank Demos Helsinki. His academic background is in futures studies and innovation research. At Demos Helsinki Neuvonen has completed tens of future forecasting projects, varying from scenario reports for European Commission research projects, to workshops on megatrends for NGOs, cities, ministries and corporations. Aleksi is currently working on his doctoral dissertation on futures research and urban planning at Tampere University of Technology in Finland and Radboud University Nijmegen in the Netherlands.

We are in the midst of an expansion of time horizons in city planning and governance. Cities look further into the future when forming strategies and blueprints. The shift to a long-term view arises from two major megatrends that shape our societies at a growing pace:

Recognising a link between these trends, cities across the globe have adopted ambitious goals that extend far into the future. For instance an increasing number of cities in the developed world set bold greenhouse gas emissions targets, aiming for complete carbon neutrality by 2040 or 2050. To this end, local governments adopt smart city strategies and define pilot areas to test new concepts. These actions aim to boost energy and resource efficiency, curb excess demand for mobility, and encourage the sharing of spaces, vehicles, tools and other resources. And of course to make cities more livable by providing new amenities to their citizens.

Challenge: How to engage stakeholders in long-term cooperation?

It goes without saying that cities need to mobilize a great number of stakeholders to the sustainability project: construction, infrastructure, energy, retail and real estate industry actors, along with startups that provide new smart services, must all be enlisted to the task. Not to forget the citizens, who play an increasingly large role in making the city attractive.

Yet with a time-scale of several decades, it is impossible to make accurate, comprehensive top-down plans for long-term collaboration. There is too much uncertainty. Moreover, the different actors have differing ambitions and values, and are not sure how their interests will fit in with the newfound objectives of local governments. Change has unpredictable consequences, and some companies (perhaps also citizens) will walk away as future winners, others as losers.

In order to get everybody on board, a city needs a tool to conceptualise long-term developments. This is where scenarios, backcasting scenarios in particular, step in.

From forecasting to backcasting

Scenarios are a tool for exploring future uncertainties. Scenarios help build capability to take strategic steps, identify actors that should be prepared for (and drive) change, and find the right timing for action. They describe the alternative futures of society, and the pathways through which those futures can be attained.

There are two main types of scenarios: 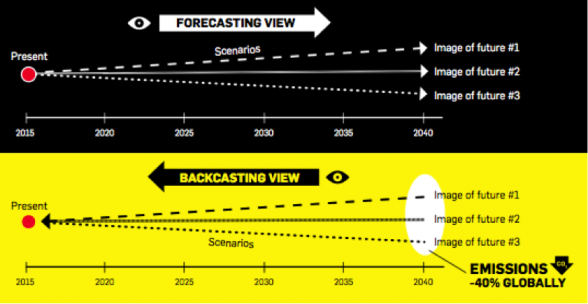 Figure 1. Forecasting works from the present day towards the future, whereas backcasting takes a future goal as a starting point.

Figure 1. Forecasting works from the present day towards the future, whereas backcasting takes a future goal as a starting point.

Backcasting is a useful tool, when forecasting studies indicate that long-term developments are likely to lead to undesirable outcomes (such as climate catastrophe). In backcasting, we take the future scenario we want to achieve (say, for example carbon neutrality by 2040), and move step-by-step backwards towards the present. We will then have identified the steps that need to be taken to reach our desired goal, the potential obstacles on the way, and the key actors that need to be involved. The scenario is a roadmap that helps stakeholders understand their relevance to the task at hand, recognise their role in the process, and visualise their contribution.

It is impossible to predict the exact turn of events, so it makes sense to explore different possible pathways that take into account a range of potential developments. In order to construct stories of the future, one should first identify the critical variables that could shape the world in the decades to come. Extrapolating from these drivers, one often ends up with two or more flexible scenarios that accommodate a variety of possibilities. This helps decision makers broaden their perspective on how a given goal can be reached.

Three scenarios for the future of smart cities

Over the past three years, in a project called Smart Retro, we have worked in two cities in the Nordic countries to map out what achieving sustainability entails for them: in the Bagarmossen neighbourhood in Stockholm, Sweden and in Lahti, Finland. Backcasting has been an important tool in the process.

As a starting point, we took the objective of a 40% decrease in emissions by 2040, coupled with a higher quality of life than today. Taking existing trends to the extreme, we singled out three societal drivers for three scenarios:

We then constructed potential pathways to carbon neutrality in each scenario for both cities, identifying the bottlenecks that have to be overcome, the key actions needed, and the stakeholders involved. Each scenario reaches the emissions target and a higher quality of life, albeit in different ways. The scenarios aim to demonstrate that an economically viable carbon neutral society can be attained through different courses of events and actions. On the other hand, they illustrate that the emissions goal can help cities flourish in several alternative futures.

Figure 2. Three scenarios, all leading to a set of sustainable outcomes.

The scenarios we compiled have helped our partner cities to find a direction for their experimentation and piloting. In doing so, it has helped them identify new partners, especially in strartups that provide smart urban services. This is important for their mission to change the behaviour of citizens towards more sustainable practices. Our partner cities were inspired to pilot new shared logistics services, to try out pop up shops, and to test new smart home solutions with real estate owners. This is possible in the world of today, where new solutions succeed or fail fast, and where digitalisation makes success spread exponentially. It is also vital in a time where partnerships between the city, big corporations and real estate owners can no longer dictate the fate of a region.

On the other side of the coin, we aimed to demonstrate the increasing importance of sharing economy solutions in the quest for sustainability. The scenarios and subsequent new partnerships between cities, corporations and startups have enabled sharing economy startups and smart solution developers to understand the wider significance of their actions on the road to sustainable cities.

The three scenarios on alternative smart futures in Bagarmossen and Lahti have been published as part of a report titled Nordic Cities beyond Digital Disruption, by Demos Helsinki and KTH Royal Institute of Technology. The report also provides practical pointers on how to build new types of partnerships around experimentation with future smart services, between public organizations, built environment corporations and startups.

Nordic Cities beyond Digital Disruption can be found here: http://www.demoshelsinki.fi/en/julkaisut/nordic-cities-beyond-digital-disruption/

This article was originally published by Meeting of the Minds on March 14, 2016.