Avoiding Smart City Mistakes — Learning From the Past

Willi Kaczorowski is the author of the book “Die smarteStadt. Den digitalen Wandel intelligent gestalten. Herausforderungen, Handlungsfelder, Strategien”, published in 2014 in Germany. He now works as a strategic advisor for digital government and smart cities. As a member of the former Cisco “Internet Business Solutions Group (IBSG)” he was working with senior government officials on all levels on digital transformation of government services in Germany.

Do you still remember the old days when the e-government movement began? In these days some governments did smart things but most of the first mover failed to address the needs of citizens and companies properly. Among the biggest mistakes of the first wave of e-government were:

It is not too late to learn from the mistakes of the first e-government generation. As a starting point it is important to view the creation of a smart city as a holistic political-strategic innovation program.

This innovation program can draw on 7 major technological trends, which are dominating the coming years. These megatrends include: the widespread availability of free high-speed wireless access, the systematic use of social networks and cloud computing, the trend towards mobile government, big data and the use of sensors and other smart devices as part of the Internet of Things and a comprehensive IT security for intelligent networks and applications.

Six Areas of Activity Should Be Incorporated 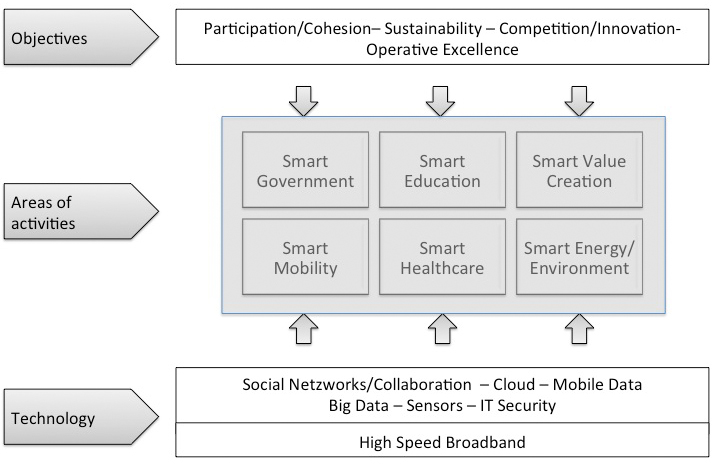 First, “smart government”: Three aspects are in focus here: the development of the next generation of e-government with significantly improved access to public services on all devices and a much broader range of e-government services. Also, it ‘s about how more transparency and openness a city government can provide to citizens and businesses. In addition, it has to support the need for more city participation in the government decision-making process.

Second, “smart education”. This includes all elements that are part of the formal education chain. It covers everything from early childhood education to vocational training and life long learning for adults. Means to bridge the digital divide or the expansion of e-learning offerings are also part of smart education building blocks.

Third, ” smart value creation”. In order to achieve this goal city governments have to provide the necessary technological infrastructure so that prosperity and growth for citizens and businesses are encouraged in a smart city. Finally, people are especially smart if they are creative. That’s why smart cities need to foster the creativity of urban residents. This also implies a new role for the economic development department in cities.

Fourth, “smart mobility”.  Against the background of increasing climate and environmental challenges the integration of transport modes , the future of the automobile driving and the expansion of bicycle and pedestrian traffic as well as the capacity expansion of existing infrastructure through better use of intelligent technology falls into this area of activities.

Fifth, “smart health and care”. Building blocks are a better networking of stakeholders in health care, means to secure an independent life at home, the future of health care in rural areas as well as the needs for next generation hospitals and nursing homes enabled by networked technology.

Sixth, “smart energy and environment”.  In this area of activity the future oft the cities energy production and distribution as well as energy management that supports the goal of climate neutral cities have to be addressed. Furthermore it includes means to change citizen’s and business behavior regarding environmental topics by a substantial increase of transparency of environmental data.

The changes that will take place in each of these areas of activity with the help of networked information and communication technology can be considered as very significant. But for a major leapfrog cities have to address the synergies that come out by a systematical integration of all or at least some of the areas of activity because they are interdependent and related to each other.

Mayors and senior politicians in city government know that the digital change that occurs in our cities should be designed actively. The paradigm of the smart city can be the script for this.