Wendy Landman is Senior Policy Advisor at WalkBoston. She served as Executive Director of WalkBoston from 2004-2019 where she led the organization’s growth into a statewide advocacy presence with leaders in state and municipal government, the non-profit community, and community-based organizations. Key programs underway address Vision Zero, Age Friendly Communities, rural walking and multi-modal transportation policies. Wendy currently serves as Board Vice President of America Walks.

Brendan Kearney is the Communications Director for WalkBoston where he manages outreach and communications through WalkBoston’s email and print newsletters, website, social media, and Ped 101 training programs. Brendan is also a key member of the Vision Zero team at WalkBoston and sits on the City of Boston’s Vision Zero Task Force.

Planners, designers, environmental activists, and the aging-in-community are all seeking ways to make our communities work better for our aging population. In this era of high tech solutions, there is a simple, low-cost tool at hand: install more benches! Whether along sidewalks, at bus stops, in parks, or in front of civic buildings, benches are a necessary component of age-friendly community design.

Over the last several decades, many American cities stopped installing benches, or even removed them, due to concerns about maintenance or the perception that benches attract vagrancy and crime. But recent research makes it clear that benches are a critical piece of municipal infrastructure for people who are older, who have physical disabilities, or anyone seeking to rest when walking from place to place. They have been shown to be important for mental health and social wellbeing as well. When the City of Boston prepared their Age Friendly Boston Action Plan they found that 31% of survey respondents were dissatisfied with the availability of benches in public areas and along walkways.

The importance of walking for healthy aging has been documented extensively, and is now a widely accepted goal among public health professionals. As more and more municipal and state governments look to data and research to support infrastructure investments to support age-friendly communities, good evidence is critical for their decision-making. WalkBoston used the data reported by Cerin et al in their 2017 article, The neighbourhood physical environment and active travel in older adults: a systematic review and meta-analysis, to help convince Boston officials of the importance of adding benches so that older adults can continue engaging in active transportation like walking and using transit.

After WalkBoston worked with Boston to jumpstart the bench program, the Public Works Department reported that the new benches were in use minutes after they were in place:

“We installed the benches on Saturday morning. Barely had the third one bolted down and someone was already waiting to sit on it.” 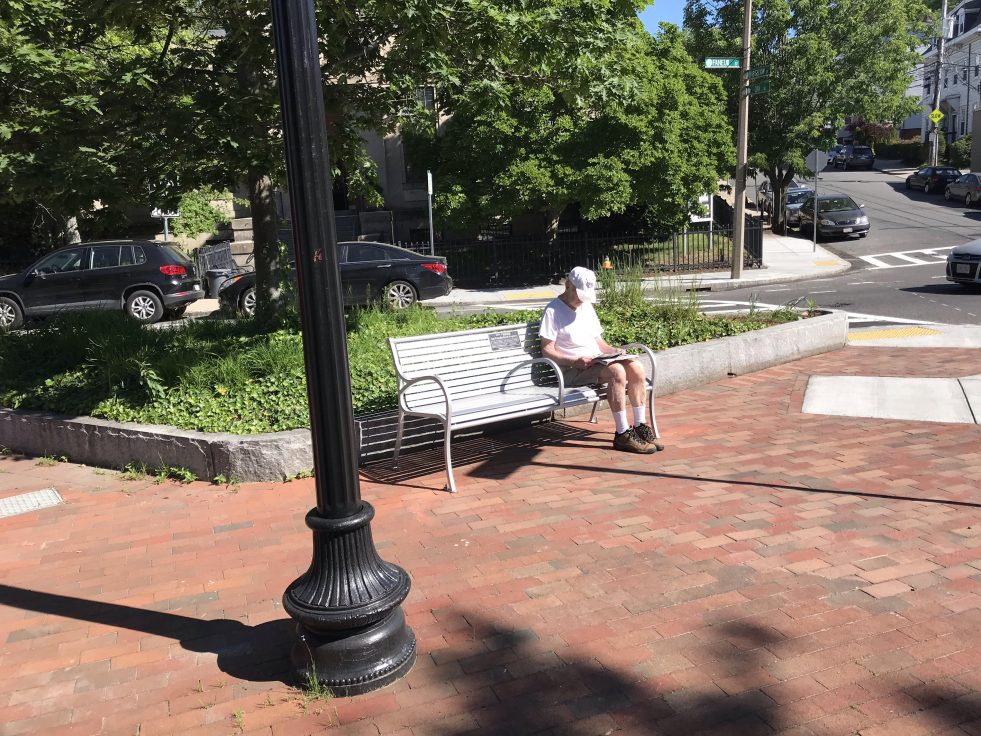 Benches are not just important for people who need or want to rest while walking. As reported in the 2017 Assembly Civic Engagement Survey carried out by the Center for Active Design, more public benches make people feel more satisfied with their cities. Surveyed residents who believe they have adequate public seating were 9 percent more satisfied with police, and trusted government 7 percent more than people who felt that seating was inadequate. In addition, an adequate number of benches in public spaces was connected to 10 percent higher civic trust and 4 percent higher public participation.

We are just beginning to understand the many ways that benches can contribute to community well-being. Copenhagen’s groundbreaking 2015 city plan, A Metropolis for People, focuses on many ways to make the city more comfortable for its residents and visitors. One of its definitions of comfort is that, “urban space is on a human scale and that there are good opportunities for standing up, walking around, and sitting down.” A suburban Australian community is testing smart benches, one of which “will count foot traffic using Wi-Fi to determine how many devices are in the area; the other will measure vibrations on a bench caused when someone sits on it or moves it.”

So how can local advocates, municipal staff, or planning and design professionals get a bench program implemented? Here are 4 ways to make it happen:

They will lead and cheerlead the effort, identify locations, help overcome neighborhood or staff resistance, and provide thanks and kudos to everyone who takes part. 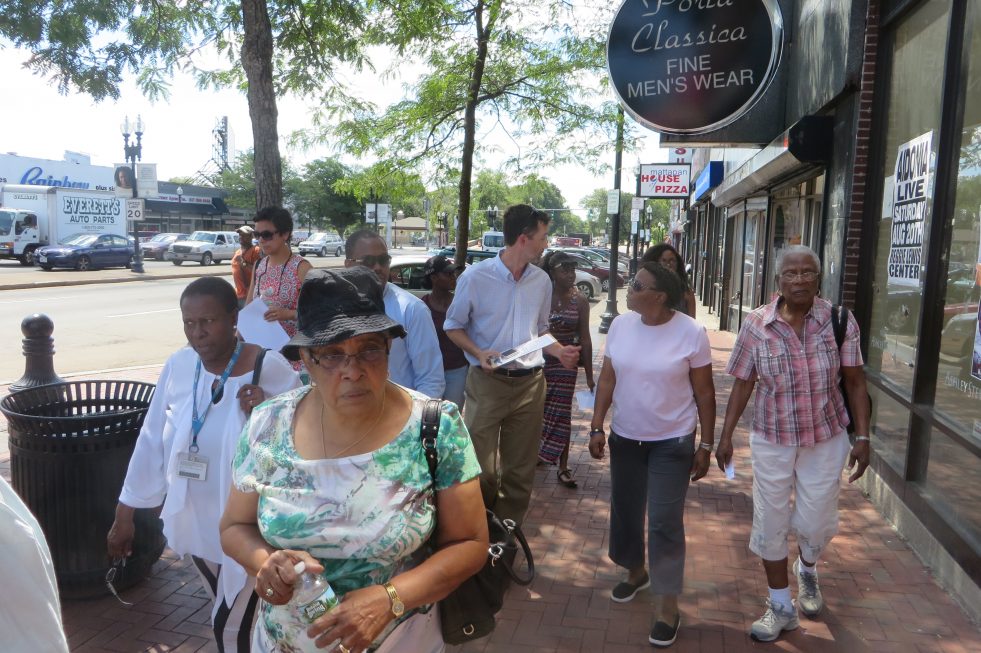 Boston prepared a survey of the City’s benches and found significant differences in the amount of seating among neighborhood Main Street Districts. This data snapshot helped City staff to determine the underserved areas where they would focus the implementation of the bench program.

Make sure the benches are well designed.

To maximize the use of the benches by people of all ages and abilities they should be the correct height and have strong arm rests to help seniors easily use them. Here is Boston’s new age-friendly bench design, as specified by their manufacturer. 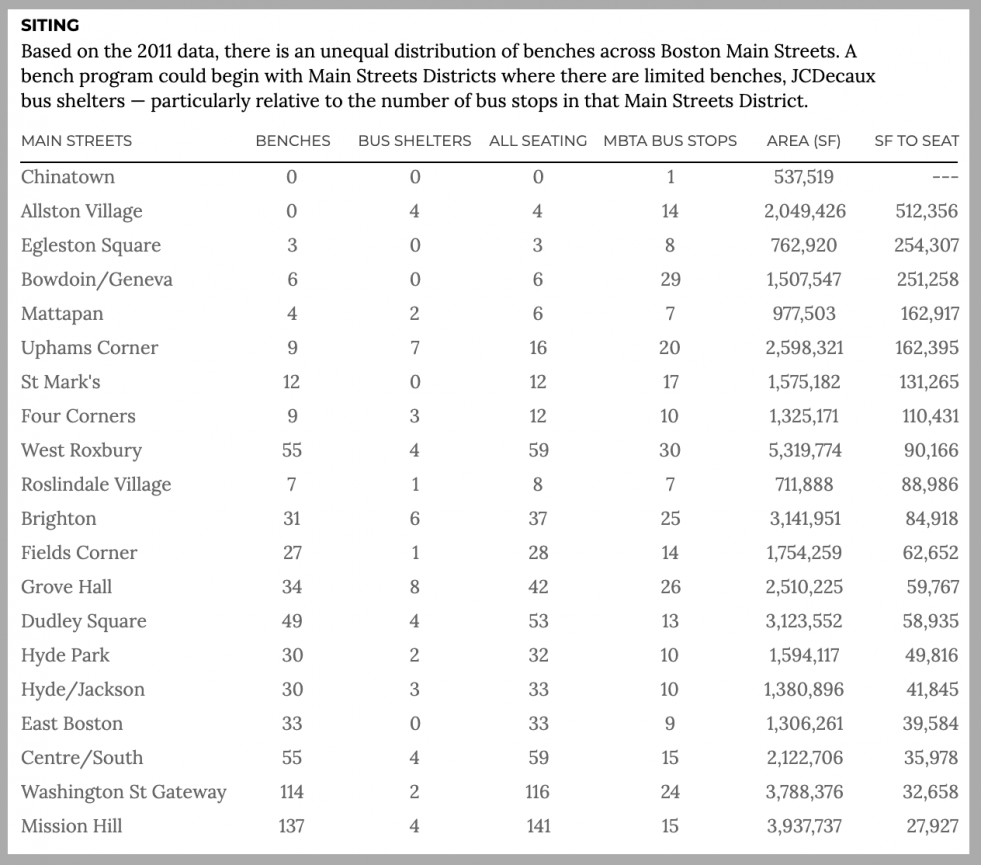 Mayors and city councilors LOVE to do inexpensive things that residents like, and benches provide a perfect opportunity for great press and pictures. 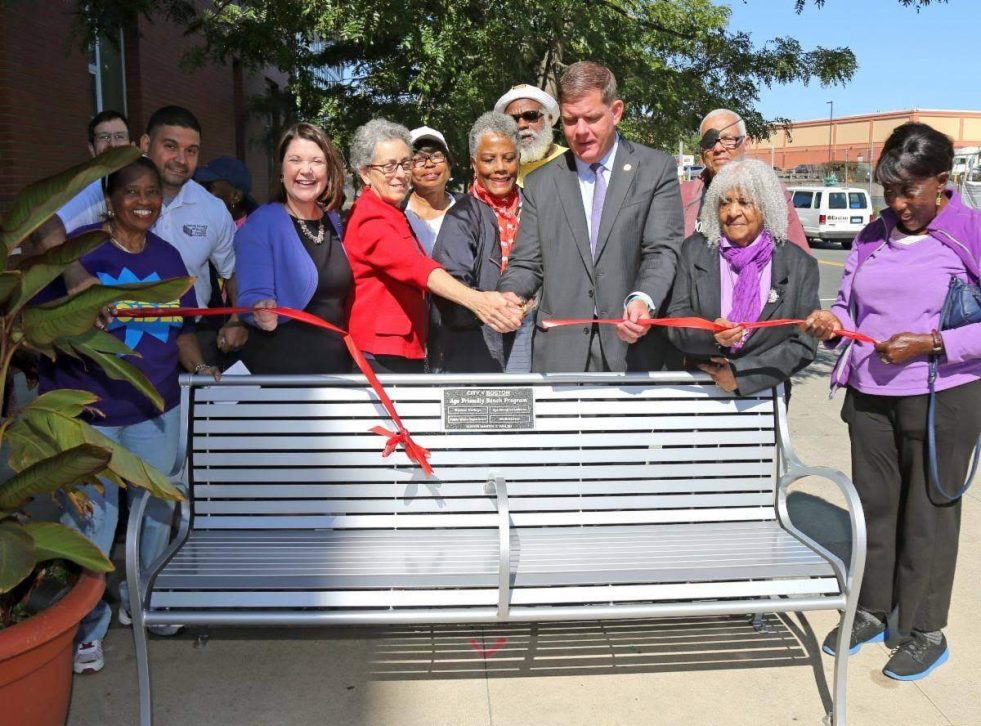 There are many businesses and institutions (banks, insurance companies) who like to see their names on plaques in their neighborhoods, and for whom the cost of benches is very reasonable. Likewise, local institutions (hospitals, universities) may even have a specific community impact fund to address neighborhood improvements like benches. 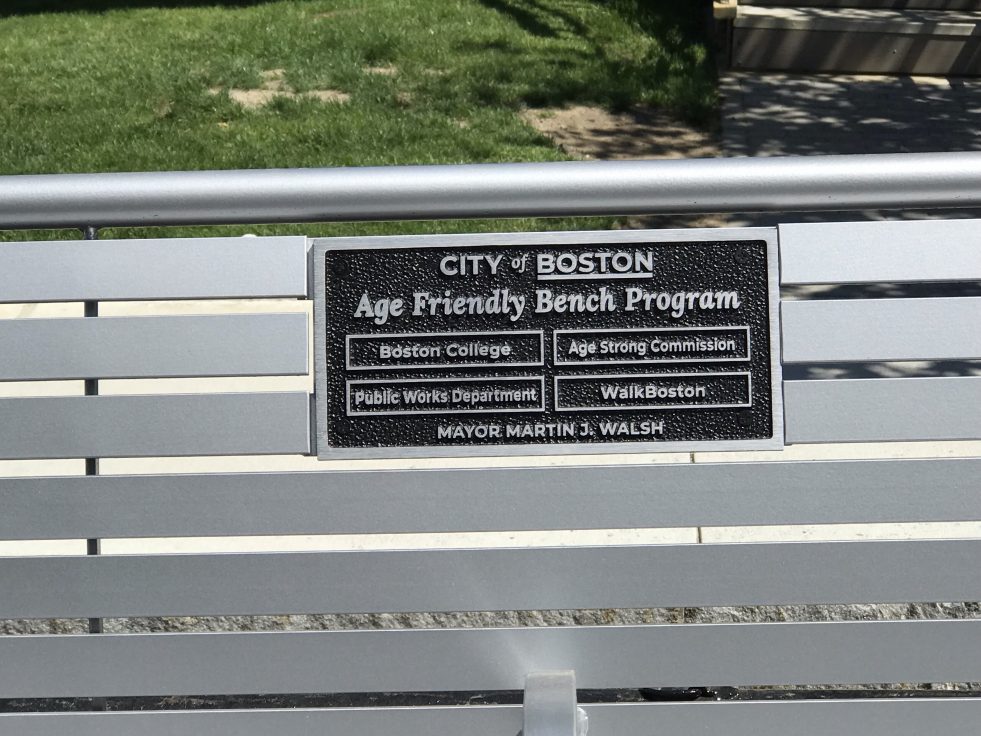 Cities and towns across Massachusetts are starting bench programs, and helping seniors to stay active and healthy by making it easier for them to continue walking in their neighborhoods. As with many improvements to the walking environment, small changes can make a big difference in the quality of life for all members of the community.